Landia’s GasMix is a unique mixing system for anaerobic tanks on biogas plants. All the mechanical components of the Landia GasMix are located outside the tank, so it is not necessary to open the tank for servicing. Beyond the safety benefit of never having to open a tank of gas, there are naturally also economic benefits: the production of biogas can continue running unimpeded during a GasMix system service. Below, two applications illustrate both the economical and efficiency benefits of Landia’s GasMix system in the field.

As a growing number of countries move away from lagoon-based systems for the treatment of palm oil mill effluent (POME), Landia has gained an important new order to supply nine of its acclaimed GasMix digester mixing systems for the generation of green energy in Malaysia.

Situated less than an hour from Kuala Lumpur International Airport, the digesters at Seri Ulu Langat Palm Oil Mill now benefit from externally-mounted GasMix systems that are low on maintenance, with no moving parts inside the tanks.

Speaking for the plant operator Dolphin Biogas Sdn. Bhd., Teoh Kah Lean adds, “There were much cheaper options than Landia, but when switching on the GasMix mixing system, we have never seen a biogas dome inflate so quickly.”

He continues, “We are proud of our new above-ground biogas plants, which are much better for the environment. Landia has helped us achieve our goals every step of the way, with first-class knowledge and communication. Processing POME through an AD process with a project-specific, highly efficient mixing system is a big step in the right direction. Even though there are cheaper alternatives we will not be looking to change anything in our design for future projects.”

Landia chopper pumps draw thick liquid from the bottom of the tank, where all solids are further chopped to accelerate the digestion process and prevent clogging of pipes and nozzles.  Liquid is injected into the upper half of the tank, while biogas is aspirated from the top of the tank and mixed into the liquid through the same ejector/diffusor. Then, in the second stage of the mixing process, the settled liquid sludge is recirculated through the bottom mixer and is injected into the lower half of the tank, which creates powerful, comprehensive mixing of the tank’s contents and stops any sedimentation build up.  The system in Malaysia is low on energy, operating for just forty minutes in every two-hour period.

The latest GasMix order for Landia follows successful installations in China, Australia, and Thailand, as well as numerous projects throughout Europe, South East Asia, and the United States.

Landia has also won an important new order with Scottish Water to retrofit two sludge digesters with its acclaimed GasMix mixing systems. Two partly underground cast in-situ digesters at Nigg near Aberdeen will now be served by the externally-mounted GasMix—designed for easy maintenance and greatly improved gas yields. All parts of the system are removable from the outside of the tank. The previous mixing system was problematical and under-performing.

Each digester at Nigg will be fitted with two diametrically opposite Landia chopper pumps (Landia can retrofit steel or concrete tanks), which draw thick liquid from the bottom of the tank, where solids are chopped to accelerate the digestion process and prevent clogging of pipes and nozzles.

In the first stage of the mixing process, the liquid will be injected into the upper half of the tank, while biogas is aspirated from the top of the tank and mixed into the liquid. This not only has the benefit of reducing buoyancy at the surface of the liquid, but also continues to mix after the pumps are switched off thanks to the rising gas bubbles.

With 2x 30kW systems on each 4000m3 digester, the installed power equates to a very economical 15 watts per cubic meter. When factoring in reduced running times (as low as twenty minutes in the hour), energy savings can be substantial. In addition, reduced running times means that pump-wear components last significantly longer. 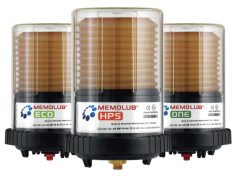 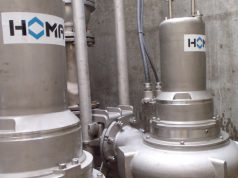 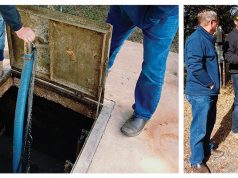