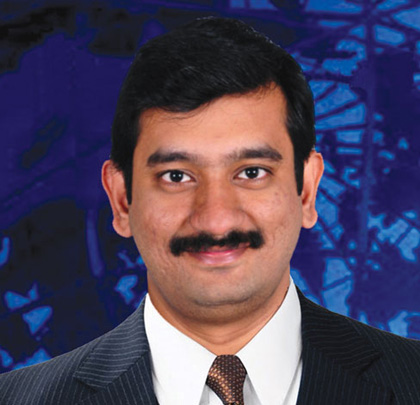 Frost & Sullivan, headquartered in Mountain View, California, is a global growth consulting company that also provides market research to a wide range of industries, among other offerings. Anand Gnanamoorthy is the program manager for Frost & Sullivan’s Industrial Automation and Process Control Group. He sat down with Modern Pumping Today to reveal what his data says about the future of submersible pumps.
Modern Pumping Today: Your research shows that submersible pumps are a mature market for North America. If I’m a supplier, how does this change the way I do business?
Anand Gnanamoorthy: Submersible pumps, as with various other process equipment units, have been in a mature stage for some time now. A key strategy for suppliers is to understand market movements and focus on certain end users to maximize growth potential.
For example, the construction industry was the hardest hit end user vertical by the economic recession of 2009. However, the post-recession outlook is extremely positive with growth rates expected to be more than 5 percent by 2017. The numbers of construction projects are on the rise and this particular vertical, along with water and wastewater, account for more than half the market. Suppliers should look at this end user vertical aggressively.
Another example would be in water and wastewater, which accounts for more than 30 percent of the total market. Investments of close to one trillion dollars are expected to be pumped into upgrading existing and developing new infrastructure. This makes it one of the highest growth potential markets that suppliers should focus on. The market is witnessing a skewing dynamic towards wet pit submersible pumps due to their lower costs and lower space utilization.
Electric submersible pumps are another segment with massive growth potential due to an increase in the number of spent or mature gas fields.
MPT: What challenges do pump manufacturers face in a maturing market? How will factors like economic uncertainty or trade regulations influence manufacturers’ decision making?
Anand Gnanamoorthy: Economic uncertainty is certainly a challenge, leading to a general apprehension in the market regarding starting new projects or investing in upgrades. This becomes an issue for submersible pump manufacturers as spending on non-insulated verticals like construction, which is the second largest end user vertical, slows down, thus affecting the industry as a whole. To combat uncertainties, manufacturers need to be cautious regarding demand levels, walking the fine line of being able to provide good delivery times but not to have surplus stockpiles. Improving analytics and business intelligence solutions is becoming increasingly important for suppliers, enabling agility to respond to market fluctuations. Deep analysis of end user verticals, to understand which ones are performing better than the market and which are below the average growth rate, becomes essential.
MPT: Even in a maturing market, your research points to avenues for potential growth. How do you expect demand to change in the water and wastewater fields?
Anand Gnanamoorthy: Water and wastewater comprises the largest segment of more than 30 percent of the total submersible pump market. Due to significant investments being pumped both at the enterprise level as well as the municipal level, this segment is expected to be the fastest growing end user vertical.
Another factor to consider is the shale gas boom—this industry has actually spawned quite a significant water play. The proliferation of sites and wells is giving rise to a multitude of plants close to the site to treat produced water and make it either available for reuse, or to make it environmentally benign for release.
MPT: What are the best ways the submersible pump industry can position itself to capitalize on these opportunities?
Anand Gnanamoorthy: The submersible pump industry can certainly increase targeted outreaches to specific vendors as well as establish distributors close to oil and gas sites to deliver on maintenance requirements promptly. Suitable training to enable the sales staff to gain expertise into advanced features in pumps like intelligent pumps or IT partners to integrate the pumps into the enterprise wide management solutions would be added value for customers as we see a continued significant trend towards complete facility automation and control, including components such as pumps, compressors, fans, and so on.
MPT: Are there any domino effects coming out of this field? What tangential industries can benefit from this direction?
Anand Gnanamoorthy: Shale gas is one of the fastest growing verticals that suppliers can leverage in meeting and even overachieving on sales targets. The shale gas industry is creating a domino effect by boosting associated industries such as chemical by reducing the prices of feedstock and water treatment due to regulations towards treating produced water, to name a few. Increase in the number of wellheads and oil rigs are also contributing to a boost in demand for submersible pumps. ■
_________________________________________________________________________
MODERN PUMPING TODAY, May 2013
Did you enjoy this article?
Subscribe to the FREE Digital Edition of Modern Pumping Today Magazine!