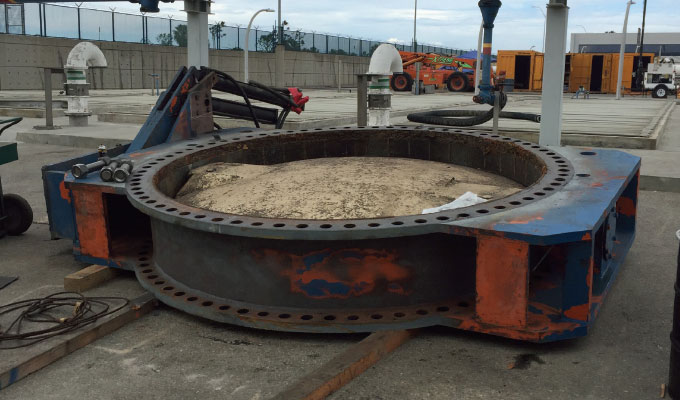 The Hyperion Water Reclamation Plant is the largest sewage treatment facility in the Los Angeles metropolitan area, treating 450 million gallons per day. Built in the 1950s, this facility has undergone several upgrades to keep up with population growth and ensure it continues to meet requirements of the Clean Water Act. “Plant monitoring and proactive maintenance is vital to ensuring our wastewater is safely treated and reclaimed or discharged to the ocean,” says Sean Kenney, senior construction engineer for the City of Los Angeles Environmental Engineering Division. 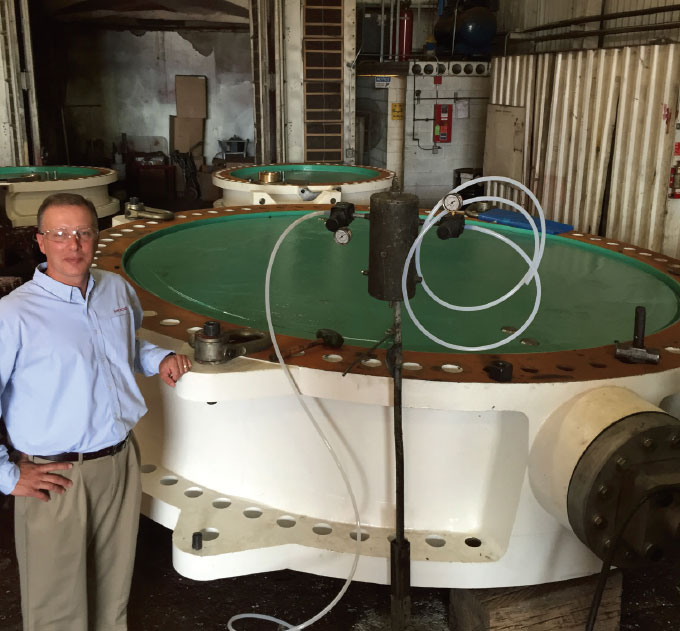 During a comprehensive forty-eight-hour pipe inspection, Hyperion officials discovered deterioration of its primary outfall pipeline. This wasn’t an unusual condition given the fact that the pipeline and pump header were over sixty years old. It also became apparent that the old isolation butterfly valves on the suction and discharge sides of the vertical turbine effluent pumps needed to be refurbished or replaced due to corrosion of the valve body and disc. These ten isolation valves provide shutoff to the pumps so that maintenance and repairs can be performed on the pumps. When tide and plant hydraulic conditions allow, plant effluent flows through a 120-inch diameter butterfly valve by gravity to the plant’s five-mile outfall pipeline without the use of pumps. Failure of any of these valves could create a backflow event which would flood the plant.

In order to repair the pipeline, maintenance and construction crews would need to divert the treated wastewater from their primary outfall pipe to an emergency one-mile outfall pipeline. The City’s Environmental Engineering Division was involved to assess the optimal process to get the necessary upgrades done with minimal impact to the plant operations and environment, including one of the most popular beaches in Los Angeles. It was determined that Hyperion crews and suppliers were going to need to work around the clock for six weeks. 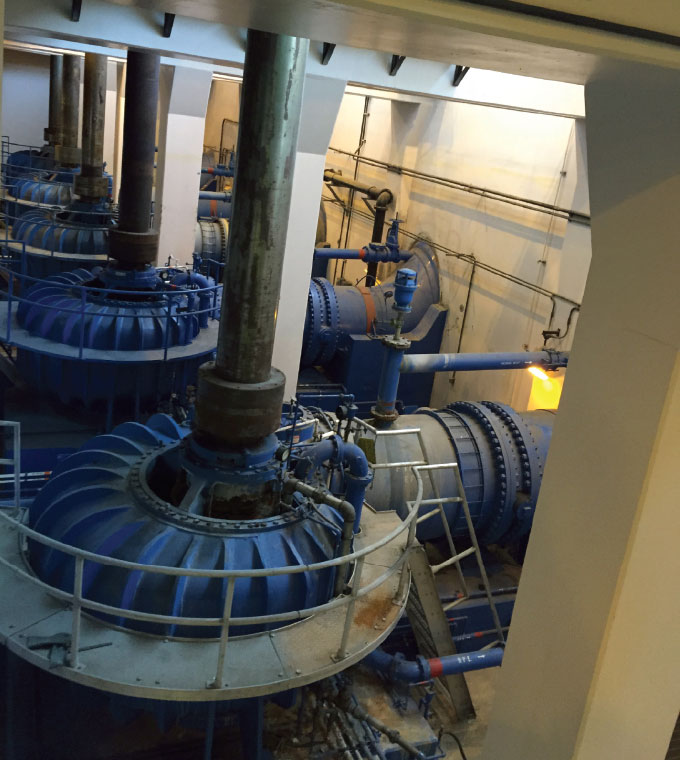 While refurbishing valves can save money, it can often take longer than providing new products. First, existing valves need to be inspected to determine if refurbishment is even a viable option. Given the location, these valves could not be extracted until the project had begun. This would delay the project’s timeline as parts would need to be located and ordered, when you should ideally be doing the work. The Los Angeles Department of Public Works (LADPW) had documented that the five, 60-inch existing butterfly valves and the five, 78-inch valves were Pratt® brand valves installed in the early 1970s. This meant that the manufacturer could locate past files and have potential parts and replacement valves on hand as soon as they were able to gain access the vault.

There was one exception: the 120-inch gravity-fed butterfly valve, which was a valve critical to public safety and operation of the plant. If this valve were to fail in the open position at high tide, ocean water from the bay and effluent would back up the pipe and potentially flood the facility. There was no secondary valve; only a redundant cylinder for closing and opening the valve.

The 120-inch butterfly valve was custom-made with no original manufacturer marking to be found. It was so uniquely designed that the connecting flange bolt drilling on the valve was non-standard, and thus, the pipe flanges were also non-standard. Replacing it with a new butterfly valve with special flange drilling was the only viable option given the time constraints. 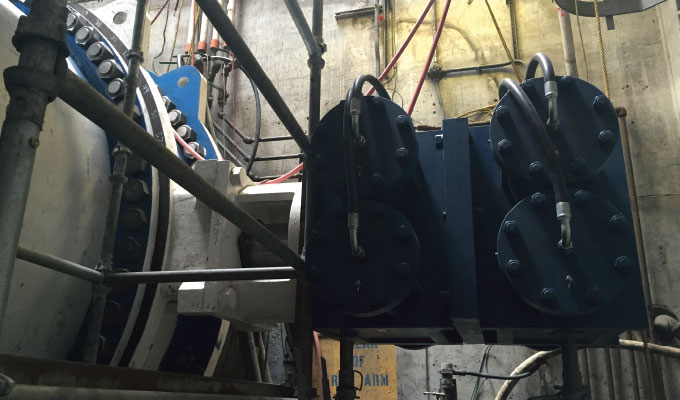 This also meant that a new actuation system was needed. The previous design approach used high pressure hydraulic power unit (HPU) and operated two cylinders on a lever, providing a double redundancy of sorts. If one cylinder failed or the HPU supplying the cylinder failed, then the plant relied on the other cylinder. With new technology developments, this approach is now considered dangerous and unreliable.

“The available pressure from the hydraulic power units was about 1,200 psi; we were looking for an actuator that would produce one million inch-pounds of torque,” says Sam Navid, construction manager for the City of Los Angeles’ Environmental Engineering Division. To meet this challenging application, Moog Flo-Tork was contacted for their expertise in designing reliable high-torque actuator systems.

The company designed an actuator that required 3,200 cubic inches (13.9 gallons) of hydraulic oil per stroke with a rated working oil pressure of 3,000 psi. To this end, the system designed by Moog Flo-Tork would produce up to 3 million inch-pounds of torque from either one of the two rack and pinion actuators, which accommodated the need for redundancy. Due to the compressed timeline for completing the pipeline project, the company added shifts to supply the two actuators and reduce months of construction and assembly time. Although the assembly is compact, it creates great power with low oil volume. Even though the two actuators are mechanically sandwiched together, they act as independent primary and emergency backup actuation systems.

“The new actuation system worked very well in unison with the new butterfly valve because Moog Flo-Tork and Pratt worked closely together throughout the design, fabrication, testing, and installation,” says Navid.

“Hyperion had initially indicated that they wanted an electric actuation system, and I think that’s partly because consumers regard the oil-hydraulic approach as messy,” says Allen Ruef, product line manager of Moog Flo-Tork. “We supply both electric and hydraulic actuation solutions, and in this case, the footprint of the HPU is smaller and uses a lesser amount of oil—that’s a benefit in itself.”

The ten Pratt isolation valves and 120-inch diameter gravity valve needing replacement were available for a timely installation, and the new large gravity-fed butterfly valve now has the latest technology to last well into the future.

“Since the installation, all eleven valves have operated around the clock flawlessly, giving plant managers and residents an upgraded level of safety and protection of the beautiful shoreline of Santa Monica Bay,” concludes Navid.