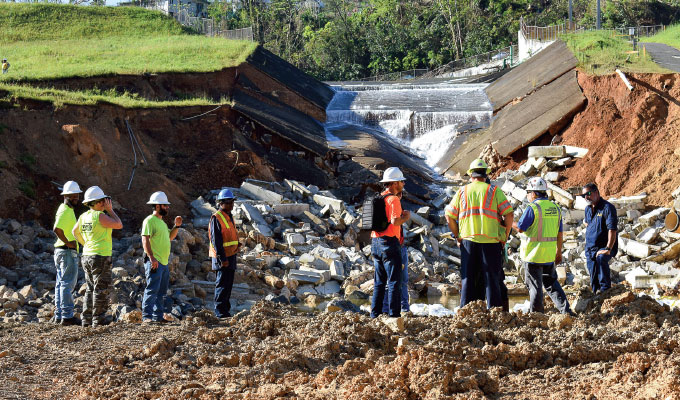 The catastrophic damage of Hurricane Maria in Puerto Rico has left a profound impact on the country and its citizens. And now, one year later, Thompson Pump and its employees are still on the island helping citizens recover from the aftermath of the worst storm in the country’s history—providing safe drinking water to 250,000 citizens every day.

Hurricane Maria’s sustained winds of more than 150 miles per hour plus more than 30 inches of rain left behind a path of destruction, including an area in Puerto Rico near the Guajataca Dam. Three days after Hurricane Maria hit the island, more than 70,000 area homes were evacuated when the ninety-year-old dam’s spillway started to collapse and there was concern the entire dam would fail.

In the immediate aftermath of the storm, Thompson Pump was among the companies contacted to bid on a dam relief contract from the United States Army Corps of Engineers. Thompson won the bid and was given the go-ahead by the government agency and immediately mobilized a team of workers to travel to Puerto Rico. 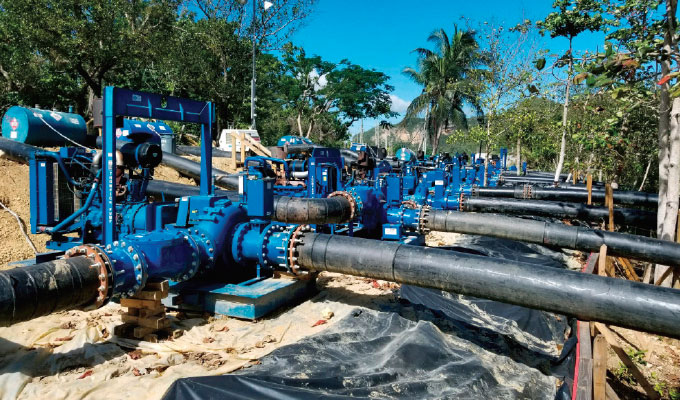 As Thompson Pump began the job of lowering the dam’s water level, lessening the possibility of a major flood, the U.S. Army Corps of Engineers realized Thompson’s equipment could be utilized for yet another vital purpose—providing drinking water for the area.

With the new task, Thompson’s used its first two pumps to reroute water from the Guajataca lake reservoir to a canal feeding three water treatment plants. The remaining eight pumps were used in a similar manner shortly thereafter, allowing clean water for the community’s citizens for the first time in weeks.

During the subsequent weeks and months, the Thompson Pump crew’s efforts helped save an entire community from a potentially catastrophic flood and provided safe drinking water each day to quarter of a million people.

Today, Thompson Pump still plays an integral role in the area’s recovery process from Hurricane Maria. More than sixty-five Thompson employees have assisted with the crisis, either on the ground in Puerto Rico or in supporting roles back in the United States. These employees have worked tirelessly, providing ongoing maintenance and pump operation assistance, while the local citizens put their lives back together.

“One year later, we’re still providing drinking water to the area,” says Thompson Pump National Sales Manager Bobby Zitzka. “Our pumps are running around the clock, seven days a week—just as they have been since last October, and we typically still have at least eight people on the ground in Puerto Rico at any given time—four people per shift. People who go there typically stay for three weeks at a time.”

“The selflessness of our people has been remarkable,” says Chris Thompson, president of Thompson Pump. “The number of our employees who volunteered to put their own lives on hold to help the people of Puerto Rico is outstanding. I’m really proud of the way our team came together for this demanding project.”

The jobsite conditions continue to change because the area reservoir water levels constantly fluctuate. But the one constant has been the performance of Thompson’s equipment. Their ten 18-inch diesel John Deere-powered pumps have stood the test of time, showing incredible dependability during times when they were needed. 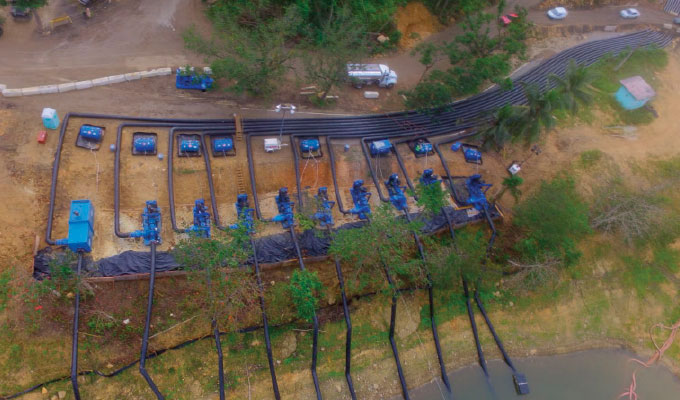 As the months pass, things are slowly returning to normal and additional water treatment facilities are being brought online.

The entire experience has been a humbling one for Zitzka and his staff. “When I was there, the locals would frequently come over and express their appreciation for the job we’re doing after seeing the Thompson Pump logo on my shirt,” he says. “This was—and still is—one of the more challenging jobsites I’ve been involved with, but seeing and hearing about how much of a positive effect we’ve had on people’s lives makes every second of it worthwhile.”