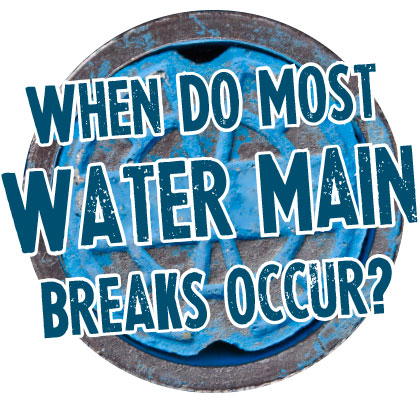 On March 11, 2014, in the LinkedIn blog “American Water Works Association,” Riley Vittitoe, the general manager for the water utility of Topeka, Kansas, posted a curious question: “When do most water main breaks occur?” One of the most interesting comments posted on the blog was that one respondent noticed that water main breaks in his system disappeared after he installed variable frequency drives on his system pumps. Although this answer was one item of many mentioned, it was interesting. Other causes listed in the blog indicated that improper bedding conditions, swelling or shrinking of the soils, and seasonal factors contributed to the frequency of breaks. Other commenters suggested that large changes in demand also contributed to the frequency of breaks.
Changes in demand, and the starting and stopping of system pumps, can create pressure waves in all types of pipes. This article will look at some of the effects of pressure waves and how they can damage a piping system.

THE BIRTH OF A PRESSURE WAVE

First, when we change the flow in a pipe, it creates a pressure wave in that pipe. Depending upon the diameter of the pipe, and the length of the pipeline, the pressure wave can, by itself, cause pipe ruptures, and can generate very large forces.
The basic equation of motion from Newton’s First Law reminds us that force is equal to mass times acceleration. Acceleration is the change in velocity, and the mass is the amount of liquid in the pipe. For long pipes, this can be a very great force because of the length of the pipe. A quick example follows:
Given a cast iron transmission main 12,000 feet (3650 meters) long 16-inch (406.4 millimeter) nominal Schedule 150 pipe (actual dimensions from the Mueller catalog are diameter of 16.32 inches [414.528 millimeters] and wall thickness is 0.54 inches [13.716 millimeters]) diameter pipeline full of water, carrying 6500 gallons (24 cubic meters) per minute moving at 10.4 feet (3.171 meters) per second.Compute the pressure rise from valve closure or pump failure.
The force exerted is the sum of the density times the quantity times the change in velocity. Note that this is simply the weight of the liquid in the section divided by the force of gravity. Written as an equation:

Where F is the force, and ρ is the density of the liquid, Q is the quantity, and ΔV is the change in velocity. Looking at some terms are re-arranging and making some substitutions, we get:

But if the pipe is non-rigid, cast iron, steel, or plastic, some of the energy is dissipated by pushing on the walls of the pipe and stretching it a bit. In steel and cast iron materials, this is small to negligible, but in PVC it can be significant. This stretching action also slows down the pressure wave.
The accurate formula for the velocity of a pressure wave in a non-rigid pipe including steel, cast iron, and plastic is shown below.

Where Ef is the bulk modulus of the liquid, Ep is the bulk modulus of the pipe, d is the diameter and t is the thickness. The density of the fluid is ρ. If we apply the actual values to our example above, the speed of the pressure wave becomes: 3342 feet (1019 meters) per second. The pressure wave will travel the length of our 12,000 feet (3657.6 meters) of pipe in 3.59 seconds. Any valve closure or pump failure which has a time less than 3.59 seconds will generate a pressure wave or water hammer in the pipe.
If a pipe has a length of L , the water hammer will reflect off of a reservoir or another closed valve, and the travel time for the return wave will be twice the length of the pipeline divided by the speed of the wave, or in this case 6.34 seconds. It is important to note that the return wave will be negative, and it will be reflected from the closed valve as a positive wave of slightly lesser magnitude, and travel back and forth as a positive and negative waveform until it finally dissipates.
For our pipeline example from above the increase in pressure will be given by

The additional stress is equal to 469.6*8.18/0.54 = 9655 psi increase in tension on the pipe wall. The yield strength of cast iron, depending upon the type is between 25,000 psi and 50,000 psi. If the wall has been corroded and is thinner, the pressure at that point could exceed the tensile strength of the cast iron, resulting in a dramatic release.

BULK MODULUS OF LIQUIDS AND SOLIDS

Below are some values for the bulk modulus of liquids and solids used in piping systems.
[row]
[col width=”six”] 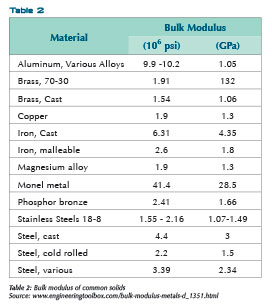 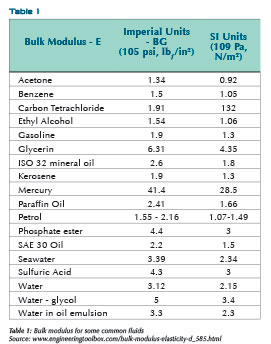 A Question and Some Answers

The sudden stopping of a fluid in a pipeline can cause high pressure waves. OK, so how do we prevent water hammer?
Increase the valve closing times will help. An initial calculation suggested above where the valve closing time is greater than twice the length of the pipe divided by the celerity of the wave will greatly reduce the incidence of water hammer. Similarly, providing pumping stations with variable speed drives and standby generators to reduce sudden starts and stops of the fluid will also help prevent water hammer.
For long pipelines, a surge tank is recommended to help reduce water hammer. Even in some houses, this can be as simple as a tee and a pipe stub filled with air near the faucet or valve subject to sudden closure. The stub should be vertical, and may or may not contain an air valve to allow it to be filled with air from an external pressure tank. Similarly, a pressure tank which is filled with air in small water systems located immediately following a pump can easily reduce water hammer from the starting and stopping of the pump while it maintains overall system pressure. But it won’t reduce water hammer occurring on the system pipes leading from the tank to distribution points.

There are a number of computer programs which model piping systems and can model water hammer and help one to figure out how to reduce it. Some of these programs will work together, others are commercially available, and some are freeware.
[row]
[col width=”six”]

KYPipe
www.KYPipe.com
KYPipe is an advanced variant of the SWMM model. The program was developed by Drs. Don J. Wood, and Sria Lingireddy. The description indicates that it can handle stedy state, surges, gas, steam and it will work with SWMM as well. The systems do perform water hammer and transient and surge analyses, and will perform steam and gas distribution and collection system analyses, and can be used to help design sprinkler systems as well. The program is commercially available.

MIKE Urban (from DHI Software)
www.mikebydhi.com
MIKE is a software suite which includes water distribution systems, water collection (sewer) systems, and wastewater treatment modeling systems. The software will perform transient and water hammer analyses. The software is commercially available and is widely used outside the US. It is an integrated suite where water supply, sewer collection, stormwater, and wastewater treatment systems all work together on a single platform.

Water CAD and HAMMER(from Bentley systems)
www.bentley.com
These are a series of programs which were formerly marketed under the name Haestad, and the Water Cad program is significantly easier to use than EPANET, but provides much of the same information. The Hammer program has been successfully used by a number of municipal systems to analyze water hammer in pipelines.

EPANET (from the USEPA)
www.epa.gov/
The program will handle a wide variety of conditions in water systems, and an unlimited number of pipes, reservoirs and pumps. The program is flexible, but it is difficult to use. It comes with a complete manual, and a reasonably good demo for learning it’s use. Data input into the system is often difficult, but once input, the program is quite powerful and can track contaminants and age of water as well as chemical contamination. The program will not compute water hammer.

SWMM (from the USEPA)
www.epa.gov
It is a stormwater management model. The program has been around in various generations since 1971, and contains a number of models and routines which allow GIS Data, water quality data, and even one dimensional river modeling. It is a complete package, and allows good graphical outputs with postprocessing of the data. The latest version was developed by CDM, Inc., and the system runs under Windows.

ITM (Illinois Transient Model)
web.engr.oregonstate.edu
The program is a finite volume model which is designed to analyze transient flows in closed conduit systems over a wide range of conditions, including flows with free surfaces as well as flows under pressure. The ITM model uses the SWMM EPANET interface, so it is not the easiest to use, and for a condition such as that mentioned above, for a single pipe, hand calculations are faster.

ABOUT THE AUTHOR
David L. Russell, PE, is a chemical and environmental engineer and the founder of Global Environmental Operations, Inc., a specialty environmental consulting firm serving clients all over the world. Mr. Russell is an in-demand consultant for projects ranging from environmental process designs and hazardous wastes to water systems and wastewater treatment. He can be reached at 770.923.4408 or by visiting www.globalenvironmental.biz.