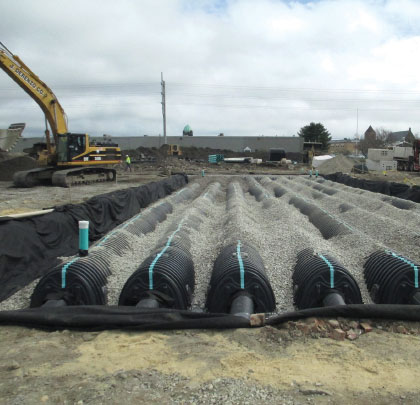 Increased storage with a small footprint revitalizes Fairfax Gardens housing development
Built in 1951, Fairfax Gardens is a 150-unit public housing development in the middle of a low-density, single-family neighborhood in Taunton, Massachusetts. The development’s infrastructure, utilities, and many building components are original to the site, making them outdated and in need of complete replacement. The current distressed conditions at Fairfax Gardens not only negatively impact the residents’ health and quality of life, but they have also caused a decline in the property value of nearby homes. In light of these issues, the United States Department of Housing and Urban Development selected Fairfax Gardens as one of eight nationwide recipients of the HOPE VI Grant, which will fund major re-habitation, new construction and other community and support service programs for residents.

In July 2012, demolition of the existing 150-units was completed and plans for the new Fairfax Gardens development and Parcel 6A, an additional, offsite complex, were underway. The original site will include 88 “green,” mixed-income, townhome units. The existing community center will be replaced, new streets and bike and pedestrian paths will be built and each unit will feature a front and backyard. Parcel 6A, which is approximately one mile away on a lot that is currently vacant, will feature seventy-two energy-efficient, mixed-income units.
The site is located across from the Greater Attleboro Taunton Regional Transit Authority (GATRA), which allows for residents to live in a denser, more urban environment and support the city’s ongoing revitalization of its downtown area into a vibrant, mixed-use, walkable environment for employees, shoppers, and new residents. 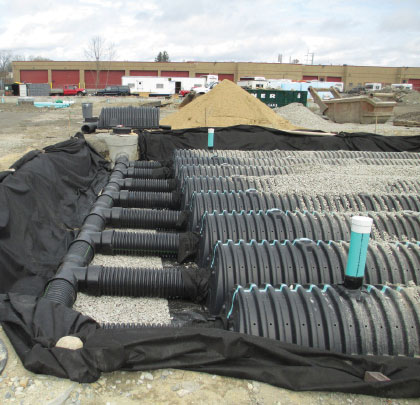 AN EYE TOWARD EFFICIENT SOLUTIONS

In order to support the new development at Parcel 6A, engineers from Kelly Engineering Group, Inc. based in Braintree, Massachusetts, coordinated with general contractor CWC Builders Inc. and subcontractor J. Derenzo Co. to develop an efficient subsurface stormwater management system. In doing so, the team was faced with a number of challenges onsite.
Being located directly across from GATRA and adjacent to railroad tracks, they found pockets of lead- and petroleum-contaminated soil which had to be removed. A portion of this soil was shipped out immediately and treated at a facility in Maine, while the remaining soil was first treated in place and then shipped to a facility in New Hampshire. During this time, workers dug out the rest of the site and tested the sides to be sure all contaminants had been removed, prior to refilling it.
The site also had a high groundwater level, requiring engineers to provide the maximum volume at the lowest possible depth so that the site did not require too much fill.

“One concern we had was that systems one and two were very close together,” says Brandon Li, project engineer at Kelly Engineering Group. “I called CULTEC to be sure these systems would function properly without having to install a drain, and their representative assured me that, much like a bathtub, they would simply flow over once full. They were able to get me an answer right away without having to hold up the project. It was very helpful.”

I called CULTEC… They were able to get me an answer right away without having to hold up the project. It was very helpful.
Brandon Li, Project Engineer, Kelly Engineering Group

Engineers selected CULTEC’s Recharger 330XLHD®, an efficient chamber which has a lower volume in the early stages of a storm. HD Supply, one of the industrial distributors in North America, distributed a total of 353 chambers which were installed twenty-four rows to make up the separate subsurface stormwater system.
“Luckily CULTEC’s chambers are shallow, because we were working within a very tight area. The chambers sit right above the water table and the minimum one-foot of cover just fits above them, with sixty parking spots right on top,” says Bradd Biagini, project manager for J. Derenzo Co.
The Recharger 330XLHD has a capacity of over 400 gallons (1514.16 liters), making it one of the largest CULTEC chambers available. The unit itself is 52 inches wide by 30.5 inches high (1320.8 millimeters by 774.7 millimeters) and has an installed length of 7.5 feet long with a bare chamber capacity of 7.5 cubic feet (0.21 cubic meters) per linear foot. In all, the CULTEC system provided 29,609 cubic feet (838.43 cubic meters) of storage, which maximized storage capacity within a small footprint to best satisfy the requirements of the Parcel 6A site.

FOR MORE INFORMATION
For more information about Cultec stormwater management chambers and other products, call 203.775.4416 or visit www.cultec.com.