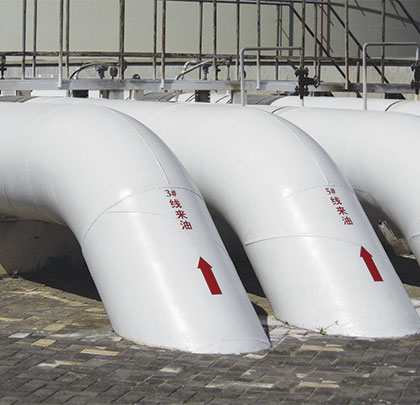 While corrosion is a serious issue in virtually all oil, gas, pipeline, and industrial facilities, it is a particular challenge for the liquid natural gas (LNG) sector, whose facilities must remain corrosion resistant despite rapid growth in areas prone to high humidity, rainfall, and monsoons.

According to the International Gas Union (IGU) 2017 World LNG Report, global LNG trade set a record for the third consecutive year, 258 million tonnes (MT), with the greatest growth in China, India, and Pakistan, which have seasonal monsoons.

In such conditions, the traditional barrier type coatings that are commonly reapplied every few years do not hold up, and often cannot be applied due to flash rusting (rust occurring within minutes or hours) caused by the wet, humid environment.

The frequent required maintenance is disruptive to production, requiring blasting off the old coatings, cleaning the surface, and reapplying multiple coatings. Despite this costly process, excessive corrosion of LNG vessels and carbon steel assets can lead to leaks, fires and accidents, as well as accelerate premature replacement.

Now an innovative coating approach is providing LNG facilities a long-term solution to fighting atmospheric corrosion even in monsoon vulnerable environments, while minimizing production downtime and increasing safety. As an added plus for countries like China that are concerned about pollution, the application involves no Volatile Organic Compounds (VOCs), a hazardous component of traditional paints. 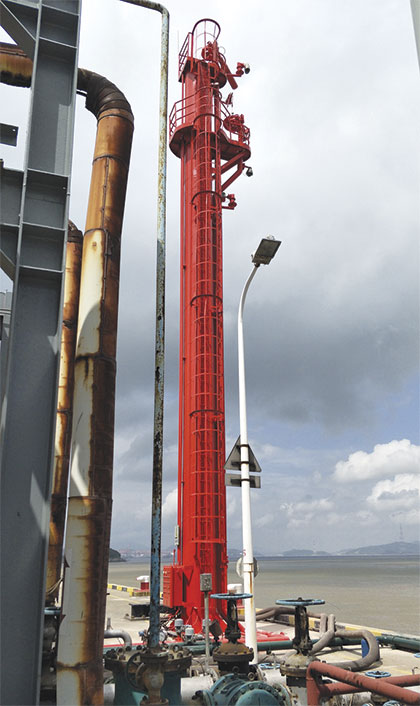 Southeast China’s Zhejiang province has high humidity, annual average rainfall of 39.3 to 74.8 inches, and frequent typhoons in late summer. In this region, the Zhoushan LNG Project is located in the Zhoushan Economic Development Zone amid these challenging conditions. As the region’s first import LNG receiving station project in which private enterprise is the main investor, total project investment is more than $1.45 billion.

The project includes a LNG receiving station, LNG terminal, and pipe connection line, which is being constructed in phases, with completion and operation slated for 2020. It is operated by Xinao Group Co., Ltd., a wholly-owned subsidiary of ENN (Zhoushan) Liquified Natural Gas Co., Ltd.

However, in phase I of the LNG project, traditional corrosion protection, which typically involves applying polymer paints and rubber type coatings, was ineffective due to very rainy, humid, windy conditions. Such coatings, in fact, often could not be applied because the humidity level was too high and the steel kept flash rusting.

While such methods can create a physical barrier to keep corrosion promoters such as water and oxygen away from steel substrates, this only works until the paint is scratched, chipped, or breached and corrosion promoters enter the gap between the substrate and coating. Then the coating can act like a greenhouse—trapping water, oxygen and other corrosion promoters—which allows the corrosion to spread.

A BREAK FROM TRADITION

Traditional solvent-based paints also posed another problem. When the solvents evaporate, they release VOCs, which are a source of air pollution, and contain a variety of chemicals linked to adverse health effects. For this reason, China has moved toward coatings that eliminate organic solvents, such as water-based paints.

In contrast to traditional polymer coatings that sit on top of the substrate, the corrosion resistant CBPC coating bonds through a chemical reaction with the substrate, and slight surface oxidation actually improves the reaction. An alloy layer is formed. This makes it impossible for corrosion promoters like oxygen and humidity to get behind the coating the way they can with ordinary paints. 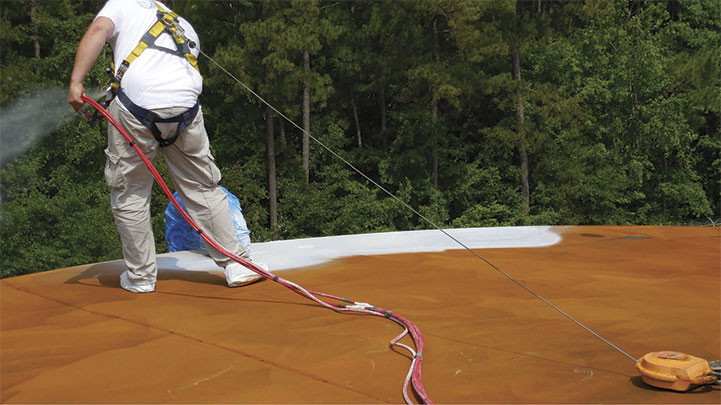 An alloy layer is formed making it impossible for corrosion promoters like oxygen and humidity to get behind the coating the way they can with ordinary paints.

A LOOK AT CERAMICS

By contrast, the same damage to the ceramic coated substrate will not spread corrosion in LNG projects because the carbon steel’s surface is turned into an alloy of stable oxides. Once the steel’s surface is stable (the way noble metals like gold and silver are stable) it will no longer react with the environment and cannot corrode.

Visible in scanning electron microscope photography, EonCoat does not leave a gap between the steel and the coating because the bond is chemical rather than mechanical.  Since there is no gap, even if moisture was to get through to the steel due to a gouge, there is nowhere for the moisture to travel.  This effectively stops atmospheric corrosion of LNG carbon steel assets.

The corrosion barrier is covered by a ceramic layer that further resists corrosion, fire, water, abrasion, impact, chemicals, and temperatures up to 400 degrees Fahrenheit (204 degrees Celsius).  Beyond this, the ceramic serves a unique role that helps to end the costly maintenance cycle of replacing typical barrier type coatings every few years.

“In LNG installations, including receiving stations, terminals, and pipeline, if both the ceramic layer and the alloy layer are ever breached, the ceramic layer acts as a reservoir of phosphate to continually realloy the steel,” explains Merrick Alpert,” president of EonCoat.  “This ‘self heals’ the breach, depending on its size, and stops the corrosion if necessary.  This capability, along with the coating’s other properties, enables effective corrosion protection for the life of the asset with a single application.”

The Xinao Group has successfully coated one Zhoushan LNG Project fire fighting water tank with the spray applied inorganic coating, which is compatible with a wide range of commonly used topcoats, and the other tank is expected to be completed in January 2018.

Because of the ceramic coating’s multiple layers of corrosion protection, and the ability to “self heal” breaches, the LNG project is on track to see long term protection of its equipment, effectively breaking the costly cycle of blasting and repainting every few years.

For instance, one of the ways China is working to mitigate the negative effects of air pollution is by turning to green alternatives such as CBPC coatings, which are inorganic and non-toxic, so there are no VOCs, no HAPs and no odor.  This means the non-flammable coatings can be applied safely even in confined spaces, and satisfy the same goals as water-based paints.

Such CBPC coatings consist of two non-hazardous components that do not interact until applied by a standard industrial plural spray system like those commonly used to apply polyurethane foam or polyurea coatings. 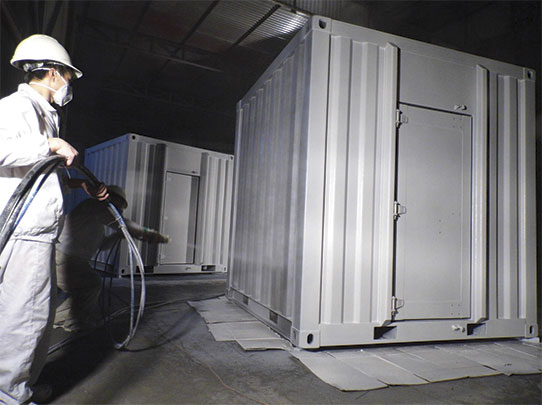 In contrast to additional polymer coatings that sit on top of the substrate, the corrosion resistant CBPC coating bonds through a chemical reaction with the substrate, and slight surface oxidation actually improves the reaction.

One of the greatest additional benefits is the quick return to service that minimizes facility downtime.  The time saved on an anti-corrosion coating project with the ceramic coating comes both from simplified surface preparation and expedited curing time.

With a typical corrosion coating, near white metal blast cleaning (NACE 2 / SSPC-SP 10) is required to prepare the surface.  But with the ceramic coating, only a NACE 3 / SSPC-SP 6 commercial blast is typically necessary.

For corrosion protection projects using typical polymer paints such as polyurethanes or epoxies, the cure time may be days or weeks before the next coat of a traditional ‘three-part system’ can be applied, depending on the product.  The cure time is necessary to allow each coat to achieve its full properties, even though it may feel dry to the touch.

With traditional coatings, extensive surface preparation is required and done a little at a time to avoid surface oxidation, commonly known as ‘flash rust’, which then requires re-blasting.  But with CBPC coatings, the flash rust is not just acceptable but is desirable. The reason for this unique CBPC characteristic relates to the fact that the presence of iron in the rust aids in the creation of the magnesium iron phosphate alloy layer. It is this alloy layer that allows CBPCs to so effectively protect carbon steel from corrosion.

In contrast, a corrosion resistant coating for carbon steel utilizing the ceramic coating in a single coat requires almost no curing time. Return to service can be achieved in as little as one hour.  This kind of speed in getting an asset producing again can potentially save hundreds of thousands of dollars per day in reduced downtime in LNG applications.

With atmospheric corrosion a perennial problem for LNG facilities with massive carbon steel structures, the utilization of CBPC coatings that can control corrosion for decades will only help the bottom line. υ

EonCoat manufactures and sells its patented EonCoat® anti-corrosive coating to large industrial customers throughout the world. EonCoat is focused on preventing corrosion on a wide scale, and the company only works with corporations of significant size, often those that are publicly traded with multinational operations. For more information, call 754.222.4919 or visit www.eoncoat.com.