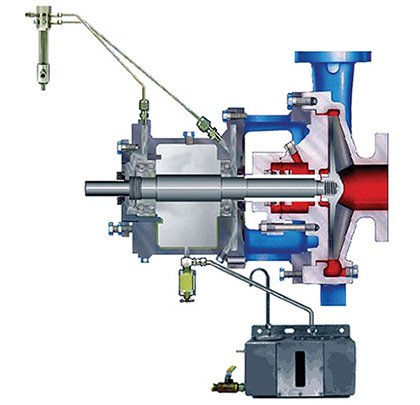 In the first installment of this article, we documented the first successful application of oil mist lubrication in an Italian refinery, the Raffineria di Milazzo, and reported the results of the refinery’s test using a small portable oil mist generator (POMG). In part 2, we will show the how the MTBF (mean time between failures) of rotating equipment has improved 25 percent during the first thirteen months of system operation, as well as the technical and economic justification for converting to oil mist lubrication.

An analysis was performed on Milazzo’s No. 3 Topping Unit considering the following parameters:

The composite influences of the above are generally reflected in MTBF, the mean-time-between failures. An increasing MTBF translates into sizeable economic savings. Therefore, MTBF data starting with January 2012 were examined; only failure incidents related to bearings, lubrication and mechanical seals were recorded (figure 1). The recorded failures represent a very high percentage of the total failure population and have generated the highest costs.

Figure 1 shows first an average of twenty-three months of conventional lubrication which is the compared with thirteen months of oil mist lubrication at No. 3 Topping. A 31 percent repair decrease can be observed after thirteen months of oil mist lubrication. As is also seen on this illustration. As can be seen from this illustration, a number of failures occurred in the time frame from February to October 2012, which is after oil mist lubrication was implemented. Similar observations were made decades ago at Shell Oil refineries in the United States; all were traceable to the fact that failures-in-progress cannot be reversed by oil mist lubrication. However, once bearings with incipient defects are replaced, things change. Oil mist will prevent future failures of rolling element bearings operating within their as-designed load ranges.The progress chart, figure 2, indicates MTBF results for twenty-five months. It starts out with a twelve month period on conventional liquid oil lubrication and then transitions to thirteen months on oil mist.

After replacing defective parts in the November 2011 to August 2012 time frame, the MTBF starts to steadily increase and there is noteable improvement from July 2012 to the present.

A number of failures occured in August and September of 2011, but only one repair is registered for the same two months in 2012. Also, the MTBF last calculated in December 2012 compares quite favorably with that seen in November 2011. There is a meaningful increase of 25 percent.

By December 2013 Raffineria di Milazzo hopes to have achieved a 30 percent failure decline. The expected MTBF increase for 2013 is then plotted in figure 3.

Oil mist is an atomized mixture of one part of oil (by volume) with 200,000 parts of clean, dry air. Plant-wide oil mist lubrication presents many important advantages over conventional lubrication. Oil mist will constantly lubricate, clean, cool, and protect all bearing housing-internal parts from corrosion, both in normal pump operation and in stand-by mode. Decades of experience can be summarized in table 1.

With oil mist being the “ultimate filter,” the researchers paid attention to bearing life extension. The various considerations and examples follow:

On moderate speed bearings the oil level could be set to reach the rolling elements, as shown in figure 4. On higher speed pumps, a slinger-ring is added; it would dip into the somewhat lowered level of oil and splash the oil into the bearings. With either “liquid oil” lubrication method there is a finite and relatively small oil volume. Dirt, water, and contaminants tend to accumulate and increase over time, until an oil change is made. When the pump is not operating, most of its internal parts are exposed to the vent or breather; the air volume floating over the oil expands and contracts with temperature changes. Accordingly, air alternates as inflow to or outflow from, the bearing housing. These movements are responsible for the presence of condensed water vapor and other contaminants in the liquid lubricant.

With oil mist applications, atomized oil at slightly higher than ambient pressure fills the bearing housing. Irrespective of whether the pumps are in operation or in stand-by mode, oil mist fills the bearing housings. A constant quantity of new, clean oil mist, free of dirt and water, enters and pressurizes the pump bearing housing. Wear debris is excceedingly rare in pure oil mist because there is no atmospheric vent and there are neither constant level lubricators (oiler bottles) nor abrasion-prone slinger rings. In the highly unlikely event of wear products being liberated from bearing surfaces, oil mist flow tends to flush these towards the waste collector (see bottom of bearing housing, figure 1 in part one of this article: “Spreading the Word on Oil Mist Lubrication: Part 1,” Modern Pumping Today, April 2013: 40).

Both the small observation bottle and the larger rectangular collector tank serve to accumulate coalesced (erroneously called “recondensed”) oil. Piping the on-off valve to the return header allows coalesced oil to be pumped back to the residual oil mist recovery system (small console) in figure 5.

To quantify the benefits of oil mist lubrication we considered the ISO 281/2000 Standard for bearing life calculation. The standard employs lubricant cleanness and contamination as important factors in bearing life assessments. Decades ago, bearing manufacturers also demonstrated that equally dimensioned bearings with identical loads will survive very different life cycles. At issue are the fundamental oil application method and oil properties that include contaminant content.

The results of L10 life cycle calculations for 7312 BECBY bearings are tabulated in table 2. We considered the two prominent lube application methods and typical levels of contamination.

It can be clearly seen how the particle content of a lubricant affects calculations of theoretical L10 life of bearings. Putting these results into practice will make it possible to understand why 91 percent of all bearings fail prematurely and why low MTBF values are experienced by an inordinate number of Industrial Plants. These are plants that allow oil contamination.

Oil mist lubrication is proven as a a mature and excellent technology for improving MTBF/MTBR values in Industrial Plants. It will greatly streamline, reduce and facilitate the need for maintenance interventions of all kinds.

The Raffineria di Milazzo achieved “Technology Leader” status in Italy as regards oil mist lubrication. Other national refineries are now interested in implementing this type of technology. After the first thirteen months of operating on oil mist lubrication in the No. 3 Topping Unit, we proved the benefits by verifying earlier economic justifications. An MTBF increase of 25 percent is evidence of favorable change. Furthermore, as we compare the pump failure rate with conventional lubrication (2010–2011) versus oil mist lubricated pumps (January–December 2012) a decrease of 32 percent was demonstrated.

With time, the process unit’s MTBF will improve and stabilize as already weak components are being replaced. The target for MTBF increases during 2013 has been set at 60 percent higher than existed at original project commissioning in November 2011. We are now poised to advocate investment in oil mist technology at other refinery units. Raffineria di Milezzo confirmed oil mist as an attractive investment opportunity. Oil mist technology represents a high potential for improvements in other European Refineries, as regards increased MTBF, progressive automation, increased safety, and less stress on the environment (reduced oil losses).

Cristian Schmid is a professional engineer with over thirteen years of experience in lubrication engineering in the oil and gas industry. He joined Grupo Sicelub Lubritech in 2000 and has been working in different technical and commercial areas in Argentina, México, and Spain. Davide Nevoso holds a degree in mechanical engineering and has worked as a maintenance engineer at Milazzo Refinery. He is a specialist in rotating machinery, lubrication, and mechanical seals.

MODERN PUMPING TODAY, May 2013
Did you enjoy this article?
Subscribe to the FREE Digital Edition of Modern Pumping Today Magazine!