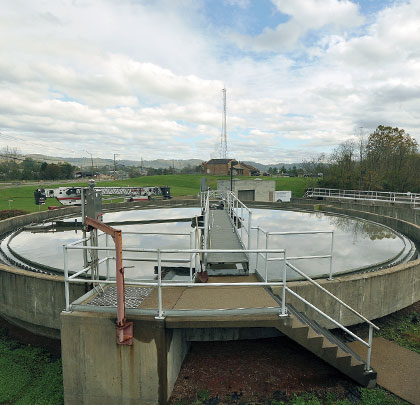 Moundsville, West Virginia is a small city located along the Ohio River. It is home to sites like Prabhupada’s Palace of Gold and the retired West Virginia State Penitentiary. Like any other U.S. city, Moundsville is also home to a wastewater treatment plant that actively supports the community’s sewage treatment needs. The plant mainly goes unnoticed—a sign that it is doing its job well.
However, problems do arise and when they do, Moundsville—like many cities—must address them with one eye on performance and the other on their budget. When the Moundsville Wastewater Treatment Plant in West Virginia chose not to fix a broken blower unit, but rather to correct an outdated approach, the result was a savings of $50,000 to $60,000 a year in energy costs. 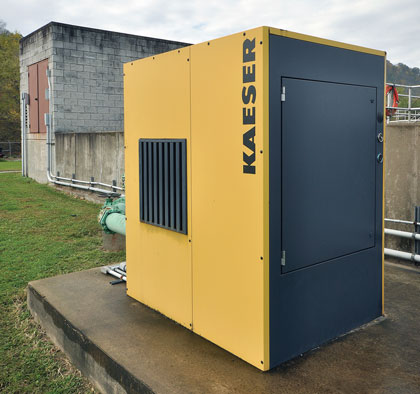 Kaeser blowers’ wide turn-down range and surge-free characteristics made them the right choice for Moundville’s tank aeration problem.
IDENTIFYING WHAT’S REALLY BROKEN
When the Moundsville Wastewater Treatment Plant experienced a blower failure, they naturally assumed they should repair the failed unit to keep their system design intact. At the time, two 75 horsepower centrifugal blowers fed air to the plant’s four aeration tanks and a third centrifugal blower unit served as a backup.

However, plant personnel quickly decided to place the repair on hold pending an evaluation of tank conditions. The plant had been experiencing a problem with pin floc in their activated sludge operation, which indicated a problem with dissolved oxygen (DO) levels in the tank. The studies that followed revealed the DO levels varied from about 0.5 parts per million to around 6.0 parts per million in a day. These results indicated the microorganisms that break down organic waste were dying in anaerobic zones at times during the day. At other times the DO levels were too high, meaning energy was being wasted. 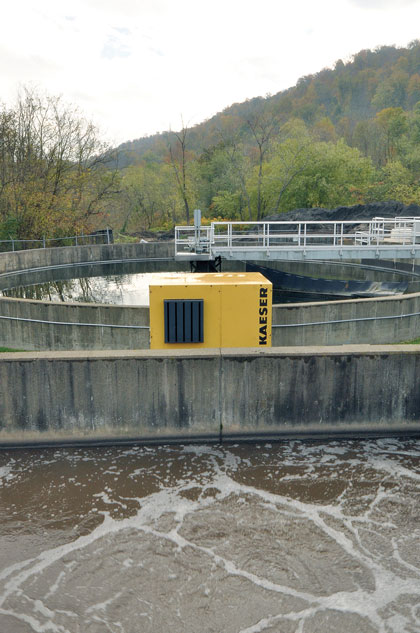 INSTALLING THE NEW SOLUTION
Next, Moundsville staff back calculated the air requirements for the individual tanks. Their calculations supported a new solution: installing a DO sensor, a 50 horsepower positive displacement blower, and a variable frequency drive in line to the secondary aeration tanks. The proposed air system was carefully designed to respond to real-time conditions in the aeration tanks.
The DO sensor would constantly monitor oxygen levels in the tanks and output a control signal varying between 4-20 mA. The signal would then be sent to the variable frequency drive. Finally, the drive would control the speed of the blower by changing the frequency of the motor power supply. This new air system called for quality components, including a Danfoss variable frequency drive and a Kaeser positive displacement blower.
Plant personnel chose Kaeser because of the wide turn-down range and surge-free characteristics. Further, the blower’s power is almost directly proportional to the speed in constant pressure applications such as tank aeration. After the selection of the new equipment, plant personnel put the plan in place. Staff programmed the drive to maintain a DO level of 2.2 parts per million and a minimum of 40 percent blower speed. 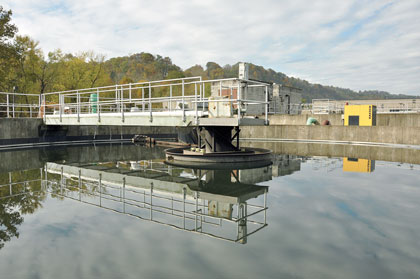 SEEING THE RESULTS
After just four days of automatically controlled DO levels, the pin floc issue was gone. What’s more, the Kaeser blower and the Danfoss drive were saving a lot of energy by operating at high efficiencies and not producing excess air. In just the first year, the Moundsville Wastewater Treatment Plant saved about $24,000 in power costs. Plant personnel went on to perform additional DO studies in the two remaining aeration tanks. They discovered the levels were too high, indicating energy was being wasted. This time the plant installed a Kaeser 100 horsepower positive displacement blower with a Danfoss variable frequency drive and two DO sensors to control airflow to the two first-stage tanks. 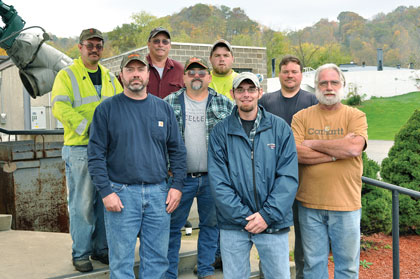