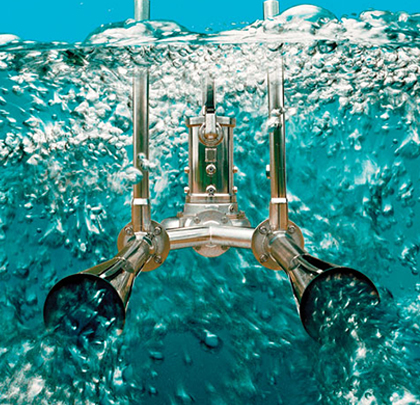 An aeration system from Landia has halted a long running dispute in the Danish town of Skjern, where local residents had complained bitterly about the odors emanating from the paper mill.
Fresh air blown along the bottom of a wastewater tank at the Skjern Papirfabrik paper mill in Jutland has successfully removed the stench described by local people as “worse than rotten eggs”—a problem that over several years brought about increasing pressure via the media for the long established paper mill to be closed down. The owners of Skjern Papirfabrik argued that they had tried many different techniques to reduce the odors, but without success. 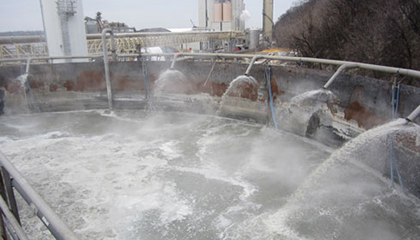 AN UNCONVENTIONAL APPROACH
Lene Lange Andersen, head of laboratory operations at Skjern Papirfabrik, notes, “We were all too aware that the situation was completely precarious and that we had to do something. If not, we could expect intervention by the local authority.”
She adds, “During that phase we had to take an unconventional approach. We knew that it was possible to provide better conditions for the microbes by adding oxygen, but we simply did not have the system for it. Somewhat desperate, we accepted an offer from Landia to try to aerate the tank contents by means of an aeration system originally designed for wastewater aeration under particularly difficult conditions. Within just a few days Landia produced and supplied two pumps with aeration equipment. The design allowed installation to be carried out in full tanks so we were able to start right away. Our hands were shaking, but it turned out to be a success.”
In short, the system consists of Landia pumps equipped with so-called ejectors (similar in appearance to a Harley Davidson exhaust pipe) being lowered to the tank bottom. There, the ejectors blow air along the bottom, creating millions of small air bubbles.
“We began with two aerators and by the following day the stench had been reduced considerably,” continues Lene. Now, Skjern Papirfabrik has five pumps in the same tank, and the odor nuisance and the complaints it created have completely vanished. 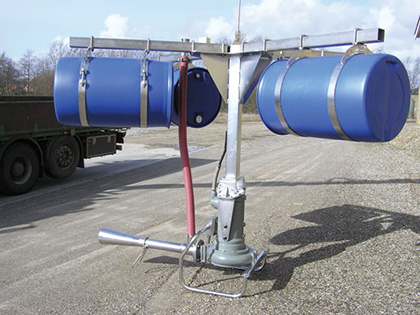 CLEANER AND CHEAPER
Not only did the aeration system eliminate the unpleasant smell by efficient aeration of the tank contents, it also brought about some additional spin-offs, which were noted by the head of the environment and energy department at the paper mill, Søren Baek.
“First of all,” says Søren, “the wastewater for our treatment plant has become significantly cleaner and we do not have to use as much energy as we used to when preparing it for final treatment at the town’s treatment plant. The introduction of Landia’s equipment was very well timed since the wastewater impact had just been imposed with new and stronger regulations. With relative ease, it turned out that we could treat the wastewater in accordance with the new requirements.”
“Secondly,” he adds, “simply by letting one of the aerators point directly into the part of the tank where the contents normally settle, we could remove the sludge in the tank. I can safely speak from experience, because previously, I personally removed 3170 gallons (12,000 liters) of sludge from the bottom of the tank! I am relieved to say that this is no longer necessary! It feels very good to walk the streets of Skjern again without constantly being accused of wrecking the local environment with a stinking factory. The more common odor in the town these days is from barbecues—and there is far more laundry now hanging on washing lines.”
“Several of the former complainants now praise the fact that we have overcome the problem by using Landia’s aerators. A smile is so much nicer than a sullen look,” Søren offers. 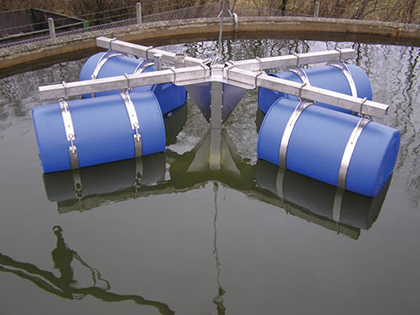 MORE SUCCESS STORIES
Landia’s AirJets, which can be supplied as floating units, mounted on a pontoon, have also been playing a vital role in the success of a former landfill site in Singapore, which has been transformed into a major new wetland. Two 230 feet (70 meter) long, 98 feet (30 meter) wide treatment lagoons for leachate, both with a capacity of over 1.6 million gallons (6.01 million liters) are served by four Landia AirJets and two mixers—all made from stainless steel and mounted on pontoons—which break down pollutants such as nitrogen compounds in the leachate. Following its pumping to five reed beds that absorb the nutrients, the leachate flows into five polishing ponds, where solids settle, and plants further absorb nutrients, with remaining liquid transported to the used water network.
Now an educational and biodiversity site, the project provides a new tranquil space for the public to enjoy the haven that has been created for birds, butterflies, dragonflies and other wildlife. Designed with exercise stations, dedicated bicycle and jogging tracks, as well as lookout points that allow visitors to get closer to the water’s edge, the promenade gives seamless public access to a waterfront and provides a corridor to support future waterfront housing and a range of recreation developments.
Ideal for applications where liquid levels vary, Landia’s non-clogging AirJets are self-aspirating so do not require a compressed air supply. Designed with vigorous mixing capabilities, oxygen transfer is vastly improved and sedimentation is prevented.
Landia’s AirJet aerators have also helped Roquette, a leading starch producer and a biorefinery, create a 30 percent saving in their energy bills—and also reduced what was costly, laborious maintenance to a simple, economic once yearly requirement.
Located in Keokuk on the Iowa/Illinois border, the heart of corn production country, Roquette America is a leading producer of starch products, syrups, and polyols (sugar alcohols) who previously utilized coarse bubble aerators powered by large blowers and several surface mixers to aerate and mix their primary and secondary oxidation tanks. However, this standard industry practice meant constant cleaning and replacing of diffuser membranes. Since Roquette operates twenty-four hours per day, seven days per week, the process could not be suspended in order to drain the tanks. This resulted in the substantial outlay of having to hire divers to enter the tanks to carry out maintenance.
Searching for new technology to reduce maintenance time and costs associated with his aeration tanks, Rob Decker, senior project coordinator at Roquette called in Landia, who created a design for the installation of nine AirJets and one mixer per tank. Landia manufactured and delivered all twenty units in less than eight weeks, enabling construction to flow smoothly.
Landia is the only AirJet manufacturer that utilizes heavy-duty chopper pumps as the standard of design for their self-aspirating AirJets. The result is a completely clog-free operation and a homogenous mixture for higher air-to-water transfer.
The reduction in energy and maintenance costs has been of great benefit to Roquette America, who produce some 700 byproducts made from maize, wheat, potatoes, peas, and other agricultural commodities. The company’s products are used in a wide variety of applications, including animal feeds, chemical products, and food ingredients. As part of its business, Roquette America also makes items for use by industrial products makers and pharmaceutical companies. 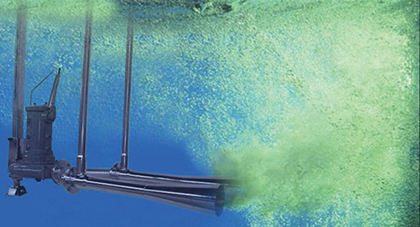