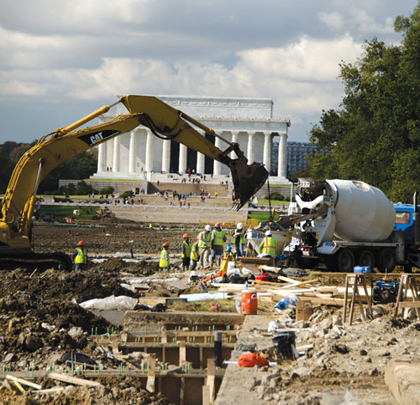 Washington, D.C., is home to some of the United States’ most prized and revered memorials. To the nearly 24 million people who visited the National Mall in 2011, the Lincoln Memorial Reflecting Pool was more science project than a scenic and iconic tourist stop.
Several key improvements were needed to keep the largest and most famous reflecting pool in the capital sustainable for years to come. The pool, originally constructed in the early 1920s, has been relatively untouched in terms of improvements since its completion. The pool was prone to leaking, holding stagnant water, and called upon the city’s drinking water resources to fill the pool at the tune of nearly 20 to 30 million gallons (75.7 to 113.6 million liters) per year. 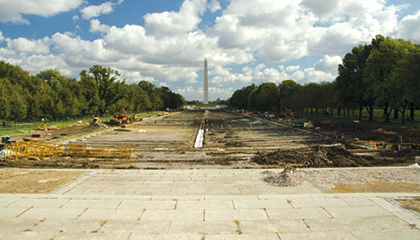 PROJECT SCOPE
The Louis Berger Group, Inc. served as the consulting firm that offered engineering, architecture, and other development resources for the project. When drafting the solutions to the Lincoln Memorial Reflecting Pool’s problems, engineers chose a series of unique solutions. The goals of the $30.7 million project included replacing the leaking concrete pool, retaining the original coping stones of the pool, installing a high-density polyethylene (HDPE) pipeline and a filtration system for drawing water from the Tidal Basin rather than using the city water, installing a system for cleaning and recirculating the water, installing wider sidewalks adjacent to the pool to replace the dirt paths, resurfacing the Elm Walks on the north and south sides of the pool, adding new lights and benches, and improving accessibility and security measures. The project was the National Park Service’s largest project using American Recovery and Reinvestment Act of 2009 funds.
The project, which began in November 2010, revolved around approximately 2400 wooden pilings that were driven into the ground until hitting bedrock 40 to 50 feet (12 to 15 meters) below. The timber pilings were spaced apart every 12 feet, 9 inches (3.9 meters) throughout the 2029-foot-long (618 meter) pool. The piles were used for the foundation design due to the presence of compressible fill materials beneath the pool, which was built on tidal basin sediments.
“The pile foundation was designed to accommodate the pool slab, water weight, and crowd surge load,” says James Stroup, technical project manager for Louis Berger Group. “Previously, the Reflecting Pool slab was not supported on piles, and as a result had settled, cracked and separated from the pile-supporting coping stone.”
In addition to the challenges of strategically hammering yellow pine timbers into the ground, workers were required to remove, repair and restore the 586 granite coping stones located around the pool. The stones, original to the 1922 construction, were restored in their original location as part of a historical preservation process. 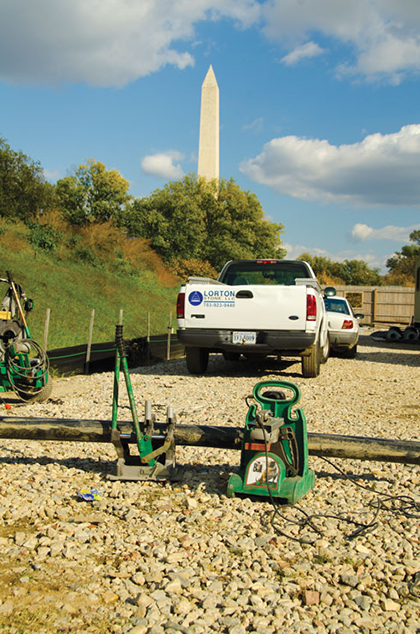 SELECTING THE RIGHT PIPE
While the unique piling system solved the issue of supporting the 12,000 cubic yards (9175 cubic meters) of concrete for the new pool, the question remained of what infrastructure to install to support the water within the new renovated design.
One of the key project requirements set forth by the National Park Service was sustainability. “It was not considered sustainable or environmentally sound to use water treated to drinking water quality to fill the Reflecting Pool, especially given the volume required,” says Stroup.
“Even with the reduced volume of the redesigned pool,” he continues, “this seemed like an avoidable waste of a valuable and limited resource. In order to design a more sustainable site, a primary design objective was to find alternate water sources to fill the Reflecting Pool. After performing a life cycle cost analysis, Tidal Basin water with filtration and disinfection was found to be the most viable option.”
The water in the pool won’t be safe for human consumption, but by filtering and disinfecting the Tidal Basin water, the pool will achieve the clear water required to achieve the same reflection of the past.
Engineers also kept the piping connection between the Reflecting Pool and the city’s water supply should it be needed as an alternative source or for cleaning purposes.
HDPE was chosen for the water supply and circulation system for the Reflecting Pool after looking at several factors.
“Once correctly welded via butt fusion or electrofusion, HDPE joints are considered completely restrained,” states Stroup. “This was particularly important as many of the lines will be located beneath the Reflecting Pool and will not be accessible.”
Other pipe materials were considered for the project, but HDPE was proven to be the best fit given the constraints of the project and environmental conditions. Looking at costs, the material and installation of HDPE was even with polyvinyl chloride (PVC) and ductile iron (DI).
One more site constraint was that the environment was once marshland, which lends itself to differential settlement on an unsupported infrastructure. HDPE’s flexibility was a key factor to combat this possibility, due to its ability to tolerate potential differential settlement without breaking.
The final factor in HDPE’s selection was that the pipe material will not support biological growth or be prone to tuberculation. 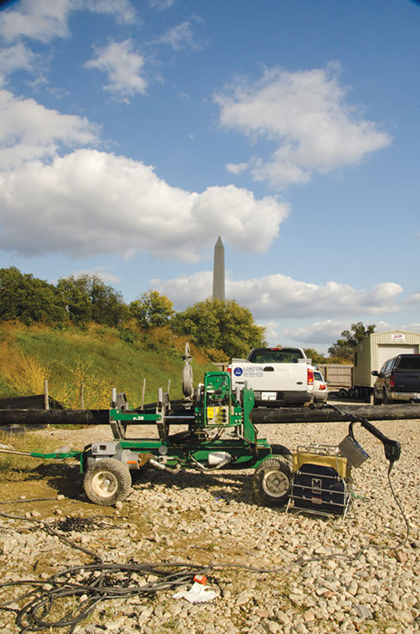 WHAT IS PIPE FUSION?
To fuse the more than 3 miles (4.8 kilometers) of HDPE pipe to be installed under the reflecting pool and to the Tidal Basin, Corman Construction enlisted the help of Ferguson Industrial Plastics. Ferguson recommended a range of McElroy pipe fusion products to be used on the project. Consultants from Ferguson also provided training and qualification testing of Corman Construction personnel to perform the pipe fusion process.
Pipe fusion, also known as butt fusion, is a widely accepted process that joins two pieces of thermoplastic pipe together with heat and pressure. Commonly associated with HDPE, the butt fusion process starts by “facing” or shaving the pipe ends simultaneously so that they can be joined together with heat to create a continuous, sealed pipeline. The welding of the pipes is accomplished by using a hot plate in contact with the pipe ends, which heats the plastic to a molten state. Then, after its removal, the pipe ends are pressed together under a controlled force to form a weld that is as strong as or stronger than the pipe itself. Third-party industry research indicates that HDPE pipe and joints can have a lifespan of more than 100 years. 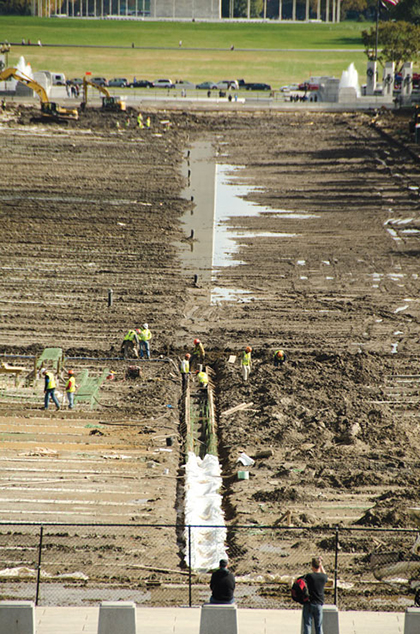