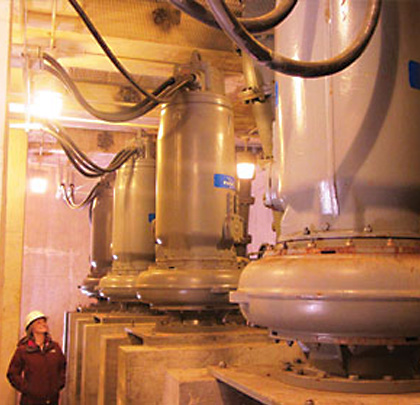 The Ypsilanti Community Utilities Authority (YCUA) is nearing completion of a $10-million pump replacement and capacity upgrade program involving the utility’s four largest lift stations. Originally put into service during 1982, the pumps became priority candidates for replacement in the utility’s Master Plan after operating ten years beyond their expected twenty-year design life, noted the YCUA Engineering Department.
According to YCUA, hydraulic modeling completed during the Master Plan indicated that increased capacity would be critical for three of the four stations. Given advancements in the pumps that YCUA preferred, the utility also had an opportunity to significantly improve the energy efficiency at the stations.
The four pump station retrofits, awarded as three separate contracts, required procurement of eighteen Xylem Flygt N pumps ranging from 100 to 470 horsepower. At the conclusion of the replacements, three of the four stations will have increased flow capacity. The Martz Road facility, for example, was originally equipped with three, 150-horsepower pumps before receiving four, 280-horsepower Flygt pumps.
The replacements embody advancements and responses to issues that have emerged in wastewater handling during recent years. The high-performance Xylem Flygt N pumps feature unique, clog-resistant impellers that significantly reduce their energy use. YCUA cites one pumping station—Martz Road—where the new replacement pumps and variable frequency drives (VFDs) have cut energy consumption from 2500 kilowatt hours (KWHs) to just under 1600 KWHs daily in actual metered usage.
The first two facilities that received the Flygt pumps, VFDs and electrical upgrades experienced 44 percent and 36 percent reductions in kilowatt hours since entering service. The utility expects similar improvements at the third station completed in early 2013 and the fourth facility scheduled for a year thereafter. 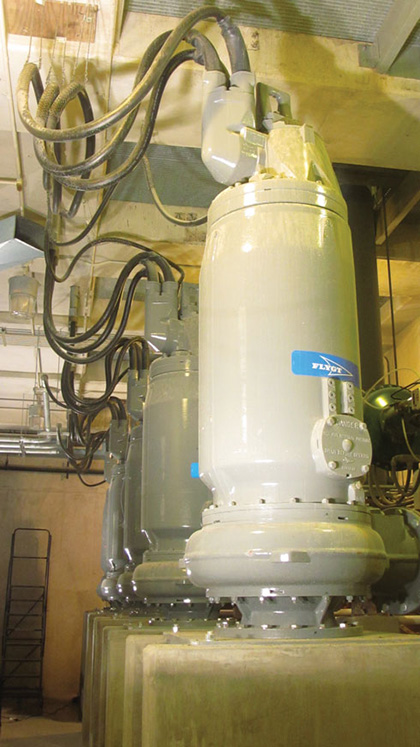 SYSTEM PUMP STATIONS RECEIVE MAJOR FACELIFT
The three- and two-level deep stations—some extending over 40 feet (12 meters) below grade—have been served until now by long-shaft pumps, constant speed motors and throttling values for flow control that individually cycled for week-long runs. Since the existing equipment had passed what the authority had considered its useful life, and maintenance/repair work would soon be an expensive consideration, YCUA took a proactive approach throughout the wastewater system to replace them with new technology as funding became available. Tetra Tech has served as the utility’s consultants throughout the projects.
The first pump station addressed by the initiative, Martz Road, was modified to increase the capacity from 14.5 to 22.5 million gallons (54.8 to 84.7 million liters) per day, in accordance with the YCUA Sanitary Sewer Master Plan. The three existing pumps were replaced with four 280 horsepower Flygt N pumps rated at 7.5 million gallons (28.4 million liters) per day each in flow capacity. Each pump has a VFD for flow control. Other improvements included replacement of the existing comminutor, all suction and discharge piping including valve and flow meter replacement, addition of a second redundant discharge header, yard piping, a standby power generator sized to run all four pumps, and related electrical and controls improvements.
The Willow Run Pump Station had four 100 horsepower pumps replaced with Flygt N pumps rated for the same flow capacity, along with replacing the existing comminutor, complete suction and discharge piping, valves and flow meters, addition of a second redundant discharge header, yard piping, and related electrical and controls improvements.
The improvements at the Martz Road and Willow Run pump stations were funded by a Clean Water State Revolving Fund (CWSRF) loan with assistance provided by the American Recovery and Reinvestment Act (ARRA) of 2009. Completed in 2010, combined project costs for the two facilities totaled approximately $5,075,000 of which YCUA will be responsible for $3,045,000 after principal forgiveness. The current improvements at Snow Road and Factory Street are both funded by SRF loans.
The Snow Road facility, completed early this year (2013), receives the flow from the retrofitted Martz Road station upline. A total of five, 470 horsepower Flygt N pumps were installed to handle that task. The five new pumps increase the maximum capacity from 24.8 to 33.5 million gallons (92.4 to 126.8 million liters) per day. Meanwhile, Factory Street Pump Station, scheduled for replacement next year (2014), will also receive the same five, 280 horsepower, 4350 gallons (16,466.5 liters) per day units that instill a new, maximum capacity of 25 million gallons (94.6 million liters) per day.
The Snow Road and Factory Street facilities will be eligible for utility rebates, which were not applied for during the Martz Road and Willow Run projects. The impressive reduction in energy use was not anticipated during the design of those earlier projects. 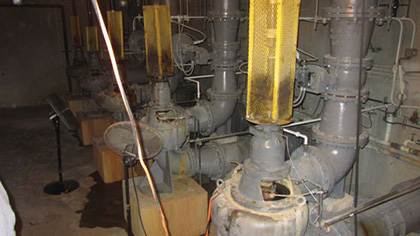 NEW-GENERATION PRODUCTS BRING NEW PROBLEMS
The clogging incidents in recent years have undoubtedly been aggravated by a new generation of consumer products since the original construction of the stations. These fibrous disposables are being flushed into the collection systems here and elsewhere across the nation with unprecedented results since the introduction of disposable diapers. The formidable adversary consists of synthetic sheet goods entering wastewater streams. Added clogging incidents can be directly traced to the mounting popularity of the nonwoven media used as a carrier for baby wipes, personal hygiene wipes, single-use floor mop pads, fabric softeners, dental floss, protective undergarments, anti-bacterial surface cleaning wipes and similar products. Because many of these products are marketed as “disposable,” consumers easily perceive them as “flushable” but the non-degradable nature can cripple lift station pumps and even choke the process flow through a wastewater treatment plant.
The problem has become so pronounced that the National Sanitary Foundation (NSF) markets an independent certification service to test the flushability of consumer products. A formal certification is awarded for a product that meets the organization’s standard for use with septic systems and/or for sewer systems.
A product can earn the NSF certification as flushable only after passing a toilet bowl and drain-line test, a “dispersability test,” a column settling test and aerobic and anaerobic disintegration tests.
CLOG-CUTTING ENGINEERING
Flygt N pumps are uniquely engineered to cope with the ‘trash’ now entering the nation’s wastewater streams. The reliability of an N pump can be attributed to the semi-open, screw-shaped impeller that prevents clogging and facilitates the unobstructed flow of fibrous material. Without material wrapping around the impeller and sapping pump flow, RPMs, and efficiency, energy savings have often exceeded 45 percent during field tests of the patented component.
The leading edge of the N-pump’s rotating impeller passes across a stationary relief groove located in the pump suction port. The dynamic action cleans and pumps away any rags, stringy materials and solids from the impeller without compromising the hydraulic efficiency. The engineering proves more reliable than even traditional chopper pumps that can grind rags and other debris but are less effective against hard foreign materials.
UTILITY RESPONDED TO SYSTEM DEMANDS AND FUTURE NEEDS
Established in 1974, YCUA now has 110 employees and an operating budget of $36 million. The operations provide water and wastewater services to both the city and charter township of Ypsilanti as well as portions of eight adjacent townships. The current YCUA wastewater treatment plant began operations during 1982 and continues today with a recently upgraded capacity of 51.2 million gallons (193.8 million liters) per day. The plant processes over 8 billion gallons (30 billion liters) a year for the more than a quarter-million people served by the facility. YCUA’s other major infrastructure consists of thirty-two sewage lift stations, six water pumping stations, six water tanks, over 600 miles (965 kilometers) of water supply and wastewater collection pipes, the wastewater treatment plant’s equipment and facilities, IT resources, and buildings. ■
_________________________________________________________________________
ABOUT THE AUTHOR
Steve London is president of Steven London Associates, Lansdale, Pennsylvania. Steve has extensive background as a writer and editor specific to municipal water treatment technologies. For the past eighteen years, the company has been involved in the development of application stories that highlight various solutions for water management professionals. He can be contacted at slondon@comcast.net or 215.361.3630.
_________________________________________________________________________
MODERN PUMPING TODAY, May 2013
Did you enjoy this article?
Subscribe to the FREE Digital Edition of Modern Pumping Today Magazine!