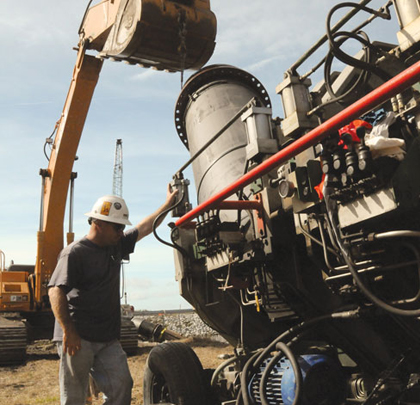 If there is a state that knows a thing or two about water, it’s Florida. The state contends with hurricanes that dump heavy rainfalls in short amounts of time, two massive coastlines, world-famous beaches, the Everglades, and many canals.
With so much water as part of everyday life, naturally some manmade water management comes into play. In 2009, the South Florida Water Management District called upon Moving Water Industries (MWI) and HD Supply Waterworks to use their expertise to move the water in a subbasin to a manageable level in order to repair an eroded flood gate. The Osceola County flood gate’s base was originally 12 inches of cement, but the water had eroded the concrete to 8 inches (203 millimeters).
Polyethylene pipe turned out to be the perfect solution for the repair. Four lines of 42-inch (106.68 centimeters) SDR 26 pipe were fused together and connected to MWI’s pumps with flanges and bolts. Each pump moves approximately 40,000 gallons (151,416 liters) per minute, with the hope of moving a maximum of 185,000 gallons (700,301 liters) per minute across the four pipes and pumps. 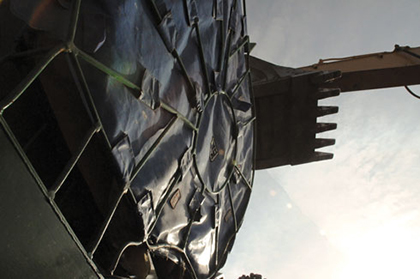 LENDING A HAND
With all of Florida’s water concerns, its not uncommon to see one of their pumps on a water-involved jobsite. In fact, the company’s reputation in the Southern United States led to a call for help during Hurricane Katrina’s aftermath. All of the company’s pumps were put into the fray, often requiring a helicopter to airlift the equipment into the work zones.
Although not quite the same scale of job as the Katrina clean-up, the flood-gate repair near Cypress Lake required getting the maximum performance out of the pumps and the pipe that would transfer the water to the other side of the dam. MWI’s Claudio Grecco, a technical specialist, says that in many instances HDPE is the best answer for moving water.
“Using steel, a weld on that large of a pipe would take two hours and that’s just for one pass,” says Grecco. “It might take a total of three passes by a welder to make sure the steel pipe is leak-free. Every jobsite we get, this poly pipe is what we beg for.”
Grecco also affirms in the case of the flood gate repair, bidding with HDPE was approximately $30,000 cheaper than using steel, and the flexibility of the pipe would be a huge asset on the job. 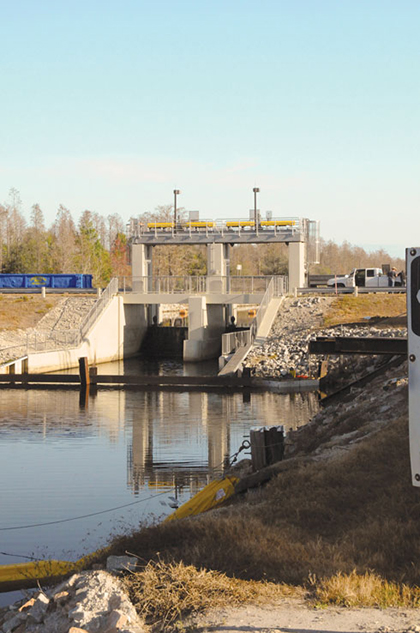 A dam is being built below the flood gate. After the dam is completed, water will be pumped from above the gate to bring the water level down to a manageable level for the repair to occur.
THE MEGAMC 1648 FUSION MACHINE
HD Supply Waterworks provided the pipe, a McElroy MegaMc® 1648 fusion machine and a fusion technician to complete the fusion process.
The jobsite called for a number of 45-degree elbows to be fused onto the four pipes at different distances to create four pipes running side-by-side from above the dam to below it. By the end of the project, the four pipes looked like a smaller “C” hugged by a larger “C” surrounded by an even larger “C” and so on. The three-segment ells were fabricated before arriving at the site by truckload.
“The MegaMc 1648 is one of our most popular machine sizes,” says Andy Santi, director of marketing and solution selling at HD Supply Waterworks.
The MegaMc 1648 can fuse thermoplastic pipes from 16 to 48 inches (406.4 to 1219.2 millimeters) OD. The machine features a semi-automatic control system that requires only one operator. Hydraulic power assists all fusion operations, including the complete operation of the jaws, pipe lifts, heater, and facer. 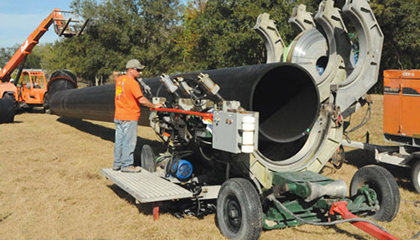