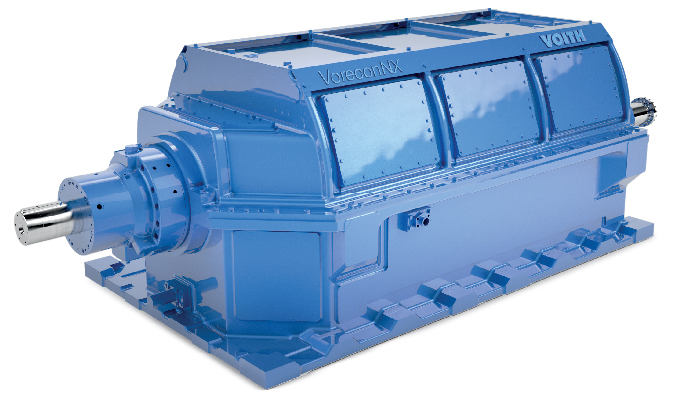 A petroleum refiner in the Southern United States placed two orders for Voith’s new VoreconNX variable speed drive and will use the drives, which deliver low-range power up to 10 megawatts, at two different locations where they will transmit power at variable speeds to compressor units. The remaining order was placed by a Canadian refiner to operate an air blower.

“The key service concept of the VoreconNX allows for spare-part commonalities within the series. Due to the smart design, the downtime during an overhaul can be reduced significantly. This leads to tremendous savings for the customer during the entire lifetime,” says Bill Quinn, vice president of new business sales, power, and oil and gas at Voith Turbo North America.

The first of these VoreconNX drives, which has already been manufactured, is in testing in Germany, where it was recently put through its paces over a standardized five-hour sequence including a speed ramp, overspeed and four defined-load points. This initial test ended without any anomalies, and both Voith and the customer were pleased with the drive’s performance.

That VoreconNX will be delivered to its U.S. installation site later in 2019, and the company’s second unit will be commissioned in 2020. The transmissions, which use adjustable pump guide vanes in the torque converter to improve part load efficiency up to 8 percent, will be used at locations in Louisiana and Texas. The first unit will drive a refrigeration compressor at various powers and speeds, while the company’s other order, going to Texas, will drive a coker gas compressor.

RELIABILITY IN A COMPACT DESIGN

The unit going to the Canadian company will be commissioned in 2020, and it will be used on a blower drive in an oil sand application.

“The success of these orders comes from their standardization and modularization. The VoreconNX offers simplified mechanical design, ease of service, common spare parts, reliability, and a compact design. Just as important was developing the trust and relationship with our end clients,” says Brinnet Paul, sales account manager, Voith Turbo North America.

“With the VoreconNX, you can run your processes at the exact, required speed, which optimizes energy savings,” adds David Pell, director of engineering, Voith Turbo North America. “Part of this efficiency comes from an integrated oil system, which supplies operating oil for the torque converter while also lubricating the drive motor and the driven machine. Another high efficiency element that comes into play is principle of power-splitting, which reapplies power to the output shaft with a superimposed gear, which is an integral part of the epicyclic gear. Further, we have a parallel shaft gear which is used to match job-specific speed requirements.”

BENEFIT TO THE BOTTOM LINE

These enhancements ultimately save money and effort for the refiner, explains Pell, which he says was a key driver of the initial interest in the VoreconNX.

“Hydrodynamic power transmissions are an important part of the driveline at refineries, so optimizing their performance is critical, and we’ve tested these VoreconNX components to have an MTBF (mean time between failures) of forty-eight years in long term operation,” Quinn says. “That is the kind of reliability and performance that pays off, and we’re thrilled we can now demonstrate this in the VoreconNX.”

The group division Voith Turbo is part of the Voith Group and a specialist for intelligent drive technology, systems as well as tailor-made services. With its innovative and smart products, Voith offers highest efficiency and reliability. Customers from highly diverse industries such as oil and gas, energy, mining and mechanical engineering, ship technology, and rail and commercial vehicles rely on the advanced technologies and digital applications of Voith.

David Pell is director of application engineering for Voith Turbo North America. With its broad portfolio of systems, products, services and digital applications, Voith sets standards in the markets of energy, oil and gas, paper, raw materials, and transport and automotive. Founded in 1867, the company today has more than 19,000 employees, sales of $5 billion, and locations in over sixty countries worldwide and is thus one of the largest family-owned companies in Europe. For more information, visit www.voith.com.