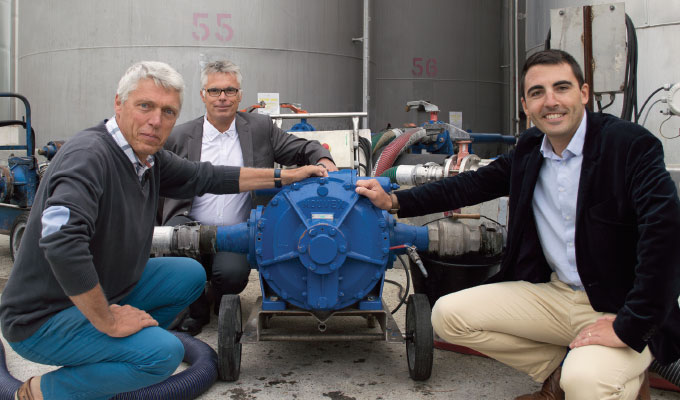 Since its founding in 1929, France-based OLVEA Group has led the way as a European leader in the supply of fish, lard, and vegetable oils for food production; and helping them along the way have been A Series and P Series Eccentric Disc Pumps from Mouvex®.

The day in 1990 that Francois Daudruy joined what is now known as the OLVEA Group as its Technical Director was a proud one for him. That’s because he became part of the third generation of Daudruys to operate the company that had been founded by his grandfather, Charles Daudruy, in 1929 in the small town of Fecamp, close to the English Channel in the northwest of France, as a supplier of cod-liver oil for human and animal consumption.

Then it was time to go to work, and Francois Daudruy knew that the only way his grandfather’s company could continue to grow and prosper was if some noteworthy changes were made in the way the fish, lard, and vegetable oils that had become the company’s bread and butter were handled, stored, and packaged.

“When I arrived in 1990, we were using centrifugal pumps, but they were not very efficient,” Daudruy recalls. “When air arrived in the pump, they would not work anymore and we had problems emptying the lines.”

This was problematic because the fish, lard, and vegetable oils that were arriving at the Fecamp plant for processing were to be used for specific end products. This included the creation of cosmetics, pharmaceuticals, human food, and animal feed, as well as various technical uses, such as the building of lasers and as lubricants for leather and metal work.

These processes require strict purity for the oils as they move from transport truck to storage tank to 330-gallon intermediate bulk containers (IBC) and 50-gallon drums, meaning that no cross-contamination could be tolerated. Additionally, because of the high value of the oils, any products that were left in the transport truck, storage tank or hoses after the transfer process was completed would essentially be lost during the necessary cleaning process. 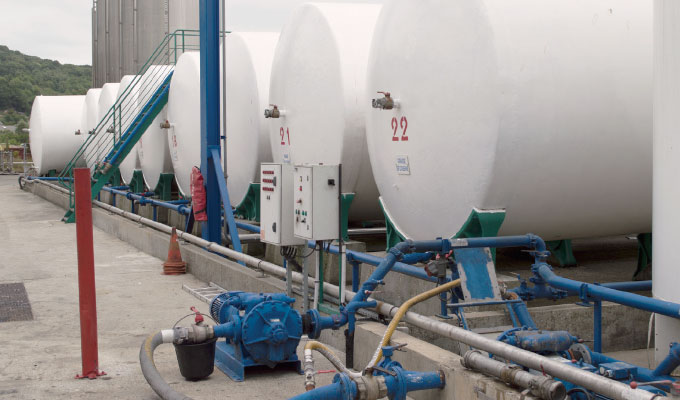 As part of its process, OLVEA Group utilizes large storage tanks to house the oil prior to transferring it to 330-gallon IBCs and 50-gallon drums.

At the time of Daudruy’s arrival, the company had begun experimenting with another type of pumping technology–Eccentric Disc Pumps, from Mouvex®, Auxerre, France, a product brand of PSG®, a Dover company. Specifically, they were testing the A Series model for the transfer of the oils from storage tanks to shipping containers, and P Series Vane Pumps for the unloading of transport trucks.

“When I arrived at the company in 1990, we had started to purchase Mouvex pumps,” says Daudruy. “The products we pump are sometimes very solid and the Mouvex pump will move the product without problems.”

Mouvex A Series pumps operate via the “eccentric movement principle” that was perfected by company founder Andre Petit in 1906. Eccentric disc pumps are driven by an eccentric bearing that is installed on the pump shaft. This creates four distinct pumping chambers that increase and decrease in volume as the disc is rotated by the eccentric bearing, producing both suction and discharge pressures as the chambers move in pairs that are 180 degrees apart. This ingenious method of operation ensures that the fluid passes through the pump at a constant and regular flow rate.

The A Series pumps, which are Mouvex’s landmark model, feature exceptional self-priming capabilities that enable dry-running and pipe-clearing operation. An automatic clearance makeup system maintains initial performance levels over time without the need for adjustment. Constant output is also maintained even as product viscosities and delivery pressures vary, which allows the pumps to reliably handle viscous, non-lubricating, volatile or delicate liquids with no shear.

“It’s very important for us to avoid cross-contamination between the different products,” says Daudruy. “This pump has very good suction and it cleans the lines; it is very, very efficient.”

Mouvex’s P Series Vane Pumps use the rotation of the pump rotor and vanes to transfer liquids from the suction to the discharge side of the pump body in a continuous movement. This method of operation allows P Series pumps to be used in a large range of applications that involve the transfer of very thin to very viscous fluids, whether they are non-lubricating, abrasive or corrosive. The vane-style design also allows the pumps to deliver exceptional volumetric performance and reliability, which leads to reduced energy consumption. Maintenance is also easy since P Series pumps can be dismantled in place without the need to disconnect the suction and discharge lines.

“When we unload trucks and air arrives in the pump, the Mouvex continues pumping and empties the lines, which is very, very important for us,” says Daudruy. “Even when the truck is empty, the pump pushes the air in the tank and we can empty the pipes.” 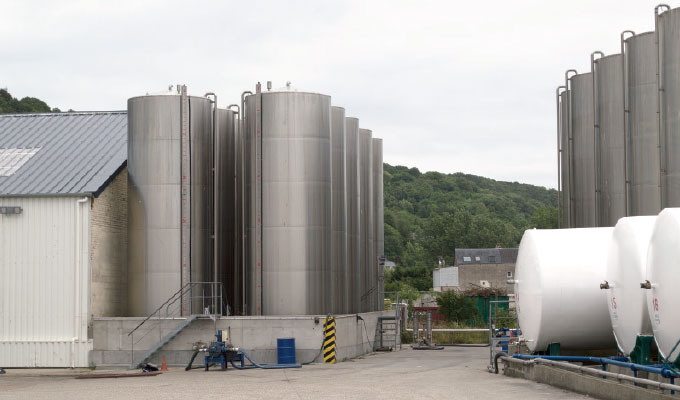 As part of its process, OLVEA Group utilizes large storage tanks to house the oil prior to transferring it to 330-gallon IBCs and 50-gallon drums.

It’s not hyperbole to say that the Mouvex A Series and P Series pumps have played a significant role in the growth of the OLVEA Group. You see, the company that Charles Daudruy founded nearly 90 years ago as the Societe d’Importation et de Raffinage d’Hulles (Oil Import and Refining Company), has been transformed through the dogged efforts of three generations of Daudruys (Francois’s cousin, Arnaud Daudruy, is currently president of the OLVEA Group) into a behemoth in the fish, lard, and vegetable oil industries, and is now recognized as the largest producer of lard oil in Europe.

Today, the OLVEA Group—which became the company’s official name in 2013 after the completion of a series of internal reorganizations—annually handles 45 million tons of oils with exports to ninety countries and annual sales of $94.5 million. OLVEA Group now operates a total of twelve business units in France, the United States, Morocco, Mauritania, Ghana, The Netherlands and Burkina Faso, with more than 300 storage tanks with a total capacity of 38,000 tons, and all of the facilities feature Mouvex pumps.

Closer to home, the Fecamp facility is outfitted with a total of thirteen Mouvex pumps, which are mounted on skids so they can be easily moved were needed during the course of the day. Each pump is dedicated to a different type of oil, with hoses of differing colors (red, green, blue, orange, silver, etc.) snaking around the grounds to indicate which product they are to be used for.

In 2010, however, the company began to outgrow its longtime facility near the harbor in Fecamp and moved its office headquarters 1.5 miles south to an old valve factory in the town of Saint Leonard. On an adjacent plot of land, the finishing touches are being put on a new processing facility that will feature dedicated lines for fish, lard, and vegetable oils. The new plant is expected to be operational in early 2018—and a familiar name will appear on each of the facility’s pumps.

“We are outfitting our new factory with eighteen Mouvex pumps,” says Daudruy. “We will be able to handle about sixty different kinds of vegetable oils and with that many, it’s important to empty the lines to avoid product cross-contamination. With the Mouvex pumps, I am totally confident that our new factory will run efficiently.” 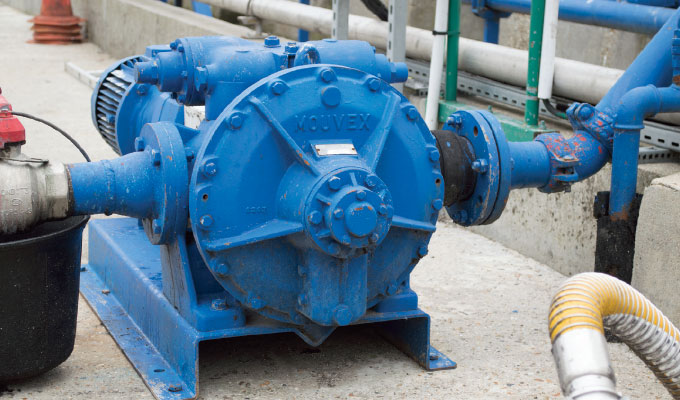 In total, the OLVEA Group uses 13 Mouvex® pumps that are mounted on skids so they can be easily moved where needed during the course of the day.

The French, in a textbook example of their famous Gallic gallows sense of humor, have a saying regarding family-run businesses: “The first generation builds it, the second generation improves it, and the third generation destroys it.” While there is an unfortunate ring of truth to that bromide, it definitely does not apply when speaking of the Daudruys and OLVEA Group. Through the determination and desire of three generations, OLVEA Group has become a leader in its field—with no sign of slowing down—and Mouvex A Series Eccentric Disc and P Series Vane Pumps have played a significant role in the company’s success.

“I arrived at the company in 1990 and now we have Mouvex pumps everywhere because they are very, very efficient pumps,” says Daudruy. “We have total confidence in the Mouvex pumps and there is great loyalty between our company and Mouvex.”

Vincent Lejeau is the regional sales manager – France Northwest for Mouvex® and PSG® and can be reached at vincent.lejeau@psgdover.com. Auxerre, France-based Mouvex was incorporated in 1906 and is a leading manufacturer of positive displacement pumps, screw compressors, and hydraulic coolers for use in the refined-fuels, oilfield, energy, food/sanitary, military, transport, and chemical-process industries, and is a product brand of PSG®, a Dover company. For more information on Mouvex or PSG, visit www.mouvex.com or www.psgdover.com.