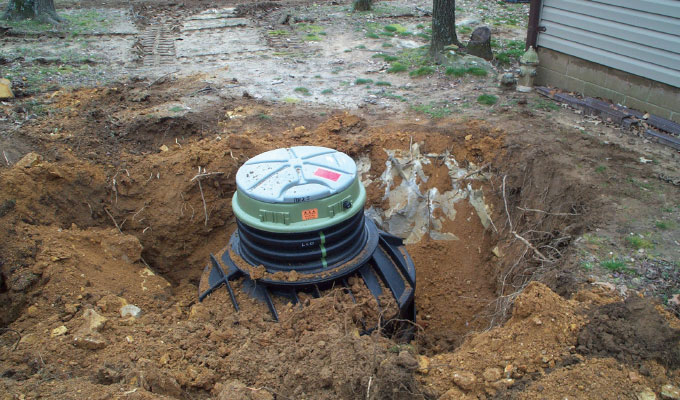 In part 1 of this series, we introduced the E/One Sentry line of alarm panels, which is custom designed for use with E/One grinder pumps. The panels provide the latest technology and the greatest flexibility for customizing features to satisfy individual needs, which makes it a perfect fit when the wastewater authority of Southside, Arkansas, was looking for an efficient solution to meet their needs without breaking the bank.

A high-priority question during the proposal’s exploratory phase focused on future Operations and Maintenance (O&M) expenditures including pump replacements, parts, and labor.

“They did some initial cost analysis and predictions before they even began the project,” says Jared Richardson, the wastewater supervisor for SPWA, “because in the planning stage they had to establish a rate charge and how does that return our money plus allow for O&M. I think O&M costs were a great deal of the consideration and I think they would be wrong to not be.”

SPWA maintains complete ownership and is responsible for all repairs of the system which started running in 2008. After E/One pioneered the grinder pump and ATS technology in 1969, many engineers and operating personnel were reluctant to adopt its system because of a concern that O&M requirements and outlays could be excessive. While those apprehensions were prudent over forty years ago when E/One had a slim “track record,” today there is a large body of well-documented experience showing the long-term reliability and operating costs with data ranging over decades for some projects. 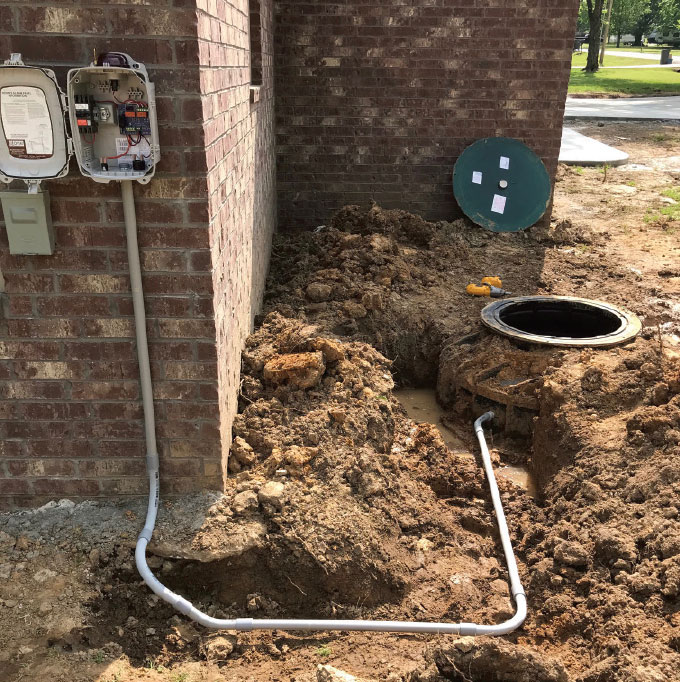 In the case of Southside, SPWA assembled its own meticulous O&M research examining service calls, type of repair, labor costs, and average mean time between service calls for each malfunction. SPWA’s service records are compiled on an annual basis beginning with the original 611 pumps in 2008 and numbering 706 at the end of 2017. A summary of the last decade indicates:

Two service technicians respond to service calls. Average service call is one hour. Pumps are pulled, replaced with a spare pump for minimum inconvenience to the homeowner, and taken to the shop for repair. This one-hour average includes shop to shop, service call, and clean up. All homes are in close proximity to wastewater treatment plant shop.

One service technician completes the shop repair and/or rebuilds pumps that are pulled onsite and taken to the shop. Average time for shop repairs and rebuilds is three hours. This average is based on two hours for simple repairs and four hours for rebuilds. Time includes pump wash, repair or rebuild, testing and cleanup. (As of 9/27/17, nineteen spare pumps have been purchased since system installation in 2008. Quantities four in 2015, thirteen in 2016, two in 2017.)

“One of the key components of a successful grinder pump system is how often service is required at each home,” notes E/One regional manager Marvin Springer. “The average mean time between service calls for 2008-2017 is a very good reflection of how well the system has been operating.”

The cost has increased, says Jared Richardson, because in the initial years the pumps and parts were covered under warranty. Since then, “The cost has gone up because the labor has gone up.” 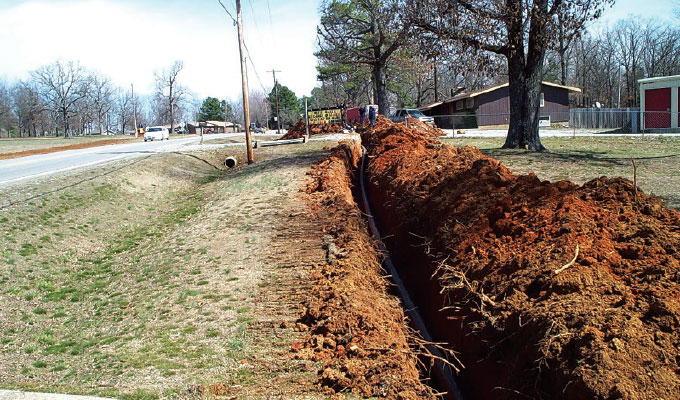 Most of the pumps purchased by SPWA are for new installations and it maintains about 20 pumps in its inventory at all times. “We bring [the removed] back, we clean it, we repair it and put it back into our inventory,” says Richardson. “Unless I’m setting new services, the number of pumps I have on hand does not decrease.”

“We don’t have a lot of customer issues—very seldom—but sometimes we do find something [a homeowner] has introduced in the tank,” adds Richardson.

When a pump malfunctions for other reasons, “I chart them each and every time we pull one. I start looking for trends. Now it’s just routine: some mechanical object that tears up from time to time, mainly motors and switches in the beginning, but then over the course of time as the pumps have gotten older it’s moved into cutter wheels, stators, the typical wear items, the typical fail items, things that have worn out over a period of time,” says Richardson.

“That’s the beauty: what we love about the E/One pumps is we’re able to repair them and then use them right back over again.”

Downstream from the pumps is the wastewater treatment plant which could be built to a smaller scale because the lack of inflow and infiltration (I&I) greatly reduces extraneous water like storm run-off from having to be treated.

“When you’ve got a collection system, especially ours being a ‘sealed system’ I like to call it, I don’t have manholes which are going to take on water, especially during extreme rains, and it makes a world of difference. In talking to other wastewater operators in the area, when they have a heavy rain, they’re treating a lot of water that they shouldn’t be and, of course, anytime you’re treating a gallon more than you should be it’s going to cost and it adds up. Having an All-Terrain Sewer is a tremendous cost savings as far as treatment goes,” says Richardson.

The E/One sewer is changing the way Southsiders live in a number of ways, from the economic prospects of Arkansas’s youngest city to a renewed vitality and boost in civic pride. 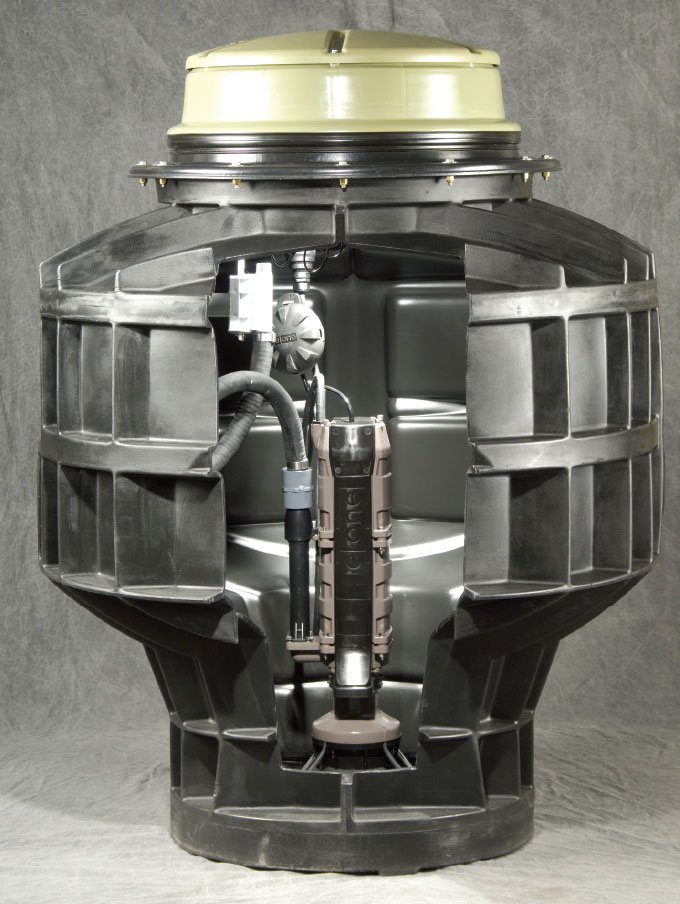 Featuring the E/One Extreme grinder pump, the WH231/WR231 offers a high level of reliability and ruggedness. The lower portion of the tank has a smaller diameter, tapered down to a dish-shaped bottom. These design features reduce the retained volume and promote scouring, which will minimize odor and corrosiveness.

“In the initial project we went up to our biggest subdivision on the top of the hill, where the need was the most. People couldn’t wash clothes or none of that,” says Richardson. “So, we sewered it and a year or so later, people that live up there were commenting on how the ground has finally dried up to the point where they can drive their four-wheelers into their yards for the first time in years because the ground was so saturated. With so many houses there discharging water into the ground, over time it had just gotten to the point where they were having trouble. It really helped existing homes not to mention what it did down on the highway, opening up real estate which before was just used for pasture land because it couldn’t be built.”

Whereas potential home sites unfit for even septic sat idle for decades, Richardson now is working with a contractor planning a 94-lot restricted subdivision. More than sixty apartment and duplex units have been built. Tractor businesses have arrived. The school has added another campus and the nursing home was able to expand. Other new construction includes a car wash, a supermarket and airport upgrades. All, including a fast food franchise, are a result of Southside’s conversion from septic to the All-Terrain Sewer.

“So much of the land wouldn’t perk and was not able to be used for years,” says Richardson. “Recently, the car dealerships have come out of Batesville and used the land that we were able to sewer.”

“There’s so much growth out here. It’s so noticeable when you drive down the main highway that I’ve had several mayors from other areas call me and say, ‘I was driving through and the growth just stood out so much that I want to come and see what you’re doing.’ So, they’ve visited and looked at the ATS and I’ve showed them the E/One pumps and how we operate and how it works. It’s been a steady, steady growth. There’s no question it’s been a big help,” Richardson says.

“There’s not been any really big surprises,” Richardson says of the last decade’s experience. “I can’t say good enough things about the E/One product and the company, I’m that impressed with it, and ten years in I’m still impressed with it,” he adds.

With corporate headquarters in New York and regional offices and distribution throughout the industrialized world, Environment One Corporation (E/One) is a manufacturer and provider of products and services for the disposal of residential sanitary waste and utility systems for the protection and performance optimization of electric utility assets. For more information, visit www.eone.com.