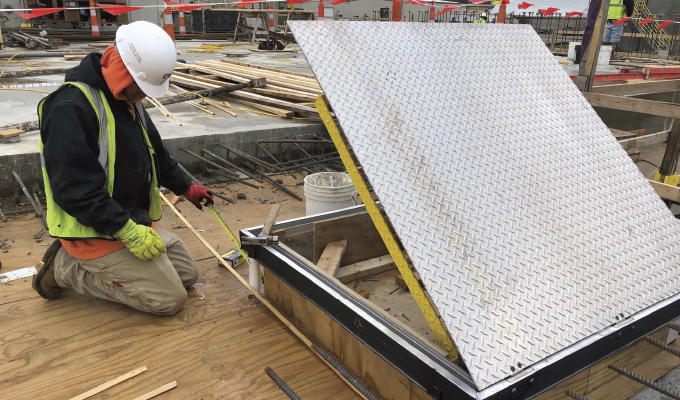 The city of Grand Rapids, Michigan, built its wastewater treatment plant in 1931, and was among the first in the nation to include a biodigester. The system worked until the late 1970s, when increased industrial waste and inefficient performance compelled the city to close the biodigester.

Now, about four decades later, the city is again turning to a biodigester to increase the city’s energy efficiency. The city is building a $57 million biodigester that will convert food waste to energy. The project is part of the city’s solution to use 100 percent renewable energy to power city buildings by 2025. “This is just taking what’s old and making it new again,’’ says Mike Lunn, the Grand Rapids utilities director.

Construction on the project began in February 2018, and start up of some systems is expected to begin in fall of 2019. The city expects gas produced by the project will generate 60 percent of the wastewater plant’s electricity needs. “We looked at future demand and other options,’’ Lunn says. “But those options would have been more than $120 million. We calculated that this was going to be the best solution for future growth.”

HOW THE SYSTEM WORKS

The Grand Rapids plan will take organic waste and combine it with microorganisms in three sealed, air-tight tanks that have a capacity of 1.4 million gallons. Two tanks will be used for municipal biosolids, and the other tank is an anerobic membrane bioreactor to quickly reduce other organic waste, such as that from the brewery. The biodigesters will convert carbon to carbon dioxide and methane. The biogas produces energy, primarily electricity, that can be used to power and heat the buildings and operations at the city’s Water Resource Recovery Facility.

Waste will filter to the biodigester from businesses in the Grand Rapids commercial district. One of the key participants in the project is Founders Brewery, one of the most prominent breweries in Michigan. The company has been expanding rapidly, and plans to produce 900,000 barrels of beer per year when its expansion is complete. The Grand Rapids location also includes a taproom modeled after a German beer hall.

The city installed a 10-inch transmission pipe that will carry concentrated food waste from Founders and other businesses to the treatment plant. The waste will then be recycled through the biodigester to create the biogas. The pipeline was installed in June of 2018. The next phase of the project, building the biodigester followed by start-up and testing, is expected to be completed in January 2019.

“It’s been great working with the City of Grand Rapids on the biodigester product,’’ says Brad Stevenson, Founders’ chief production officer. “This coming together of the public and private sectors in the name of sustainability will have a positive impact on the future of our brewery and our city.”

Grand Rapids will also allow people who pay a surcharge to transport waste to the concentrated waste tank.

The project is being funded with tax exempt municipal bonds. Electricity production from the biodigester is expected to offset the costs of the investment, and will help keep consumer rates steady. The sale of city-generated phosphorous recovery once the biodigester is fully operational could eventually add an additional revenue stream for the city.

Earthwork, foundations, concrete and masonry work started in March of 2018. Electrical and mechanical work started in November. The two-mile sanitary pipe that carries waste from Founder’s Brewery and other businesses to the Water Resource Recovery Facility opened in June.

Nicholson Construction and Menard Group USA developed the groundwork where the biodigester will be located. The company needed 15 feet of fill across the site to support the structures.  “The combination of unsuitable soil, fill and the proposed structural loads required ground improvement to meet the settlement criteria,’’ the company says on its website.

Lunn says onsite contamination from waste at a nearby railyard also provided an early challenge for construction workers. “We had planned on some of that, but it was in excess of what we had planned,’’ he says. “That was one of the biggest challenges.”

One of the most vexing issues for biodigester engineers will not be evident until the biodigester is fully operational. The nearby city of Lowell closed a biodigester in February of 2018 after less than three years in operation because of odor control issues. The smell of decaying food waste plagued the town for months, as the odor drifted to nearby homes and schools. The biodigester nearly exploded, and thousands of gallons of waste spilled on to the ground. Lunn says carbon filters and other technologies will be used to control odor in the Grand Rapids biodigester. A similar system has already proven effective in the city’s wastewater treatment plant to control odors from raw solid waste.

“Any time you take on a big project you have concerns,’’ Lunn says. “I think we have this one designed with significant resources so that odor control will not be an issue. We’ve done a good job in the design phase and we’re confident we won’t have those concerns.”

The biodigester includes a substantial number of pumps and other mechanical equipment that require access for repair and inspection. Christman selected nineteen products from The BILCO Company, including floor doors and roof hatches, that will allow workers access to equipment when the biodigester becomes operational. Architectural Building Products of Byron Center, Michigan, provided the doors.

“BILCO provides a wide range of sizes that we need and could deliver to the project on time, including very large custom-built units,’’ Sawatzki says. “A really appealing feature is the fall protection grating option for our standard-sized floor openings. This provides immediate protection from falls through the floor opening for construction personnel as well as users at the plant. It saves the expense of installing a rail system around every opening.”

The project includes eight 4 x 4 roof hatches with safety railings on the roof exterior. There are also eleven floor doors of various sizes, including some with drainage. Some doors were also customized for the application. The doors are made with stainless steel hardware and corrosion-resistant materials. They also include engineered lift assistance for one-hand operation.

The safety grate provides a permanent means of fall protection. It includes a safety-yellow powder coat paint finish, and stainless steel hardware for corrosion resistance. BILCO, which has been manufacturing specialty access products for more than ninety years, can install grates on doors prior to shipment. Retrofit kits are also available for field installation.

Grand Rapids is the second largest city in Michigan, and the largest city in West Michigan.  It is also one of the national leaders in sustainability. The city was named “America’s Greenest City” by Fast Company magazine and has received worldwide recognition for its sustainable efforts. The city was recognized by the Water Environment Federation with a “Utility of the Future” award for its comprehensive plan in the recovery of resources, such as water, energy and nutrients.

Thomas Renner writes on construction, building, and manufacturing for trade publications throughout the United States. The BILCO Company is an industry leader in the design and manufacture of specialty access products. Many of BILCO’s products incorporate features for which numerous U.S. and international patents have been issued. Years of engineering experience, coupled with manufacturing facilities utilizing the most modern equipment available, allows BILCO to design and fabricate access products for virtually every application. For more information, visit www.bilco.com.