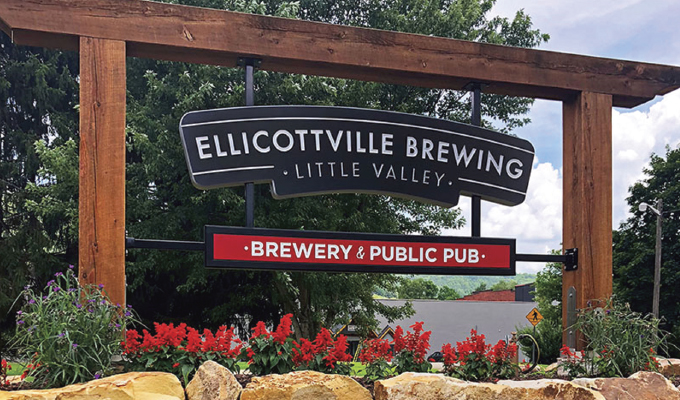 Nestled in the heart of New York ski country, Ellicottville Brewing Company was established in 1995 by its founder and managing member, Peter Kreinheder, whose inspiration for the brewery followed a ski trip to Vail, Colorado. Today, Ellicottville Village, also known as “The Aspen of the East,” provides the perfect backdrop for the Old World brewery, which played an early role in leading the then-fledgling craft beer movement.

The brewery has enjoyed much success over the years, with ongoing expansions to both its beer portfolio alongside its production and retail facilities. This expansion led the brewery to reach out to ClearCove in the summer of 2017 to address its wastewater challenges for its new craft brewery in Little Valley, New York, a few miles west of the original brewery.

The brewery’s recently constructed operation in Little Valley is twice the size of its original brewery in Ellicottville; it also has two satellite locations in Fredonia and Beamus, New York. The building in Little Valley was formerly a beverage distributor, Salamanca Beverage Company.

The brewery’s wastewater challenge was that the municipal wastewater treatment plant (WWTP), which the brewery discharges to, did not have the capacity or ability to treat full-strength brewery wastewater. The operation was faced with two options if it wanted to avoid punitive measures: spend extra costs hauling its wastewater, which is unsustainable, or the brewery could install a treatment system for its process wastewater to meet permit limits of 250 mg/l for biochemical oxygen demand (BOD) and 250 mg/l for total suspended solids (TSS).

In order for the local WWTP to be equipped to handle high-strength brewery wastewater, it would need an investment of millions of dollars. This was not an ideal situation for the municipality or taxpayers alike, even if it meant keeping key local employers happy while attracting and retaining future food and beverage producers to the area. Given the growing burden on the municipal wastewater infrastructure across the United States, the benefits of tackling the issue at its source is crucial.

This challenge was exacerbated by the brewery’s space restrictions, which prevented the deployment of a large aerobic digester. And the flow—forecasted not to exceed 15,000 gallons per day—is too small for an anaerobic digester.

Ellicottville Brewery chose ClearCove’s wastewater solids removal pretreatment system consisting of a specially designed treatment tank that is just under 13 feet in height and fits in less than 100 square feet of floor space. The compact, SCADA-controlled system has a processing capacity of up to 36,000 gallons per day (its slightly taller counterpart can process up to 60,000 gallons per day within the same footprint). The shorter pretreatment system (tank) decimates the brewery’s TSS levels, removing 98 percent or more of the TSS prior to being directed to a series of membranes, while using a small amount of coagulant, with a predetermined settling time. Dosage rates and settling times are determined by jar testing alongside past experiences of treating brewery wastewater.

Once the solids have settled, the effluent is decanted through a set of 50-micron screens to a downstream ultrafiltration (UF) membrane system that removes any remaining suspended solids. Once all suspended solids are removed, the effluent is sent to a single-pass reverse osmosis (RO) system that removes the dissolved organics that pass through the system and the UF membranes. The RO membranes are required because the majority of the brewery wastewater BOD is soluble.

The final effluent coming from the system (as highlighted in Table 1) should always meet the brewery’s discharge permit limits for both BOD and TSS. All solids and RO membrane reject are sent to a holding tank for offsite disposal.

The system performs above expectations, meeting the aforementioned discharge permit levels of 250 mg/L for both BOD and TSS.

The brewery also benefits from significant operational expenditure savings. Based on a daily process wastewater flow of 15,000 gallons per day at an annual electrical cost of $0.10/kWh, according to an independent engineering study, when compared to either a membrane bioreactor (MBR) or dissolved air flotation (DAF), the savings are approximately 30 percent. Chemical costs from the system versus a DAF or MBR are approximately 33 percent lower. On the labor side, Ellicottville’s costs are about 60 percent less when compared to the aforementioned technologies. These savings are due to the nature of the technology—settling/screening and mixing—versus solutions that are derived from biology, i.e., bugs, or aeration; both of which tend to be highly energy-consumptive.

As an effective solids removal technology, removing most of the TSS and a large amount of the BOD prior to being sent to membranes, fouling is not an issue, which brewers have typically struggled with for many years.

The result of this engagement is a brewery that has avoided punitive actions from the local municipality, while choosing an environment-friendly option. Ellicottville Brewing can focus on what it does best, make great beer. And the local municipality no longer faces the prospect of having to invest money into the wastewater infrastructure, while also ensuring that a long-standing local employer avoids economic hardship due to wastewater woes.

Greg Westbrook is the president and CEO of ClearCove. ClearCove’s technology leadership lies in its ability to remove insoluble organics and inorganics from wastewater more effectively and efficiently than any other technology in the world today. For more information, visitwww.clearcovesystems.com.