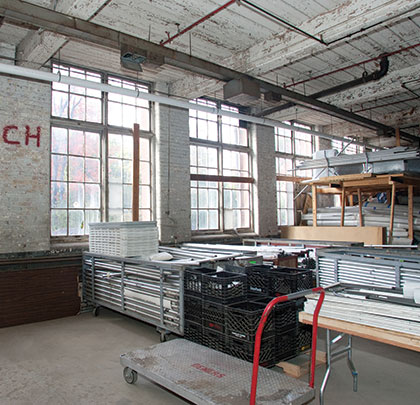 From bicycle wheels to automobiles to typewriters and electronics, the sprawling Remington Rand complex in Middletown has held an important place in the state’s economic history since 1897. But over the decades, the hub for heavy industry took a toll on the environment, contaminating the surrounding soil and groundwater and polluting the Mattabessett River.

The sprawling Remington Rand complex in Middletown, Connecticut (illustration by Mark Coleman).
BRINGING THE PAST UP TO DATE
Although the Remington Rand division closed the factory in the early 1970s, the facility still carries the familiar name. The property was foreclosed in 1999 and taken over by the city of Middletown. Today, it’s undergoing a substantial, city-led cleanup and renovation effort, designed to help attract emerging businesses and create jobs.

Installer Al Warren’s design for a series of Sanicubic Duplex Grinders upgraded the plumbing at the 110-year-old Remington Rand building.
Bringing the facility’s outdated plumbing into the twenty-first century is the effort’s centerpiece. “The building was a disaster when the city took it over,” says William Warner, director of planning, conservation and development for the city of Middletown. The area, all but abandoned, had become a host for illegal activity, and was filled with junked cars and other debris.

Sanicubic No. 3 is installed further down the factory outside this restroom and approximately 500 feet from the first duplex grinder.
There was also a serious pollution problem. “The property was never tied into the Middletown sanitary sewer system,” Warner explains. “When it was built in 1890, the plumbing was designed to flow into the nearby river. So we took it over and began the cleanup.”
To solve the building’s plumbing problem a septic system seemed the way to go initially, says Warner. But sewer lines 15 to 20 feet (4.57 to 6.1 meters) in the ground and groundwater in the old clay pipes eliminated that option.

A longer view from the point where the discharge from Sanicubic No. 3 enters the main.
CHALLENGES ALONG THE WAY
Making matters worse, contamination was found nearly everywhere, so digging to install new sewer lines and plumbing wasn’t possible either. At that point, the city turned to local plumbers to help solve the dilemma. “We didn’t have a lot of money to spend,” Warner says. “We wanted a design-build alternative for the interior sewer main, so we let the bid out to licensed plumbers.”

Seven DFUs flow into Sanicubic No. 4. This effluent is combined with discharge from the first three grinders for a total of 49 DFUs.
It was a challenge. Plumbers couldn’t dig in the ground, and they would have to bring the sewer main to the end of the building where the manhole and tie-in are. Plus, the Remington Rand building is 950 feet (289.56 meter) long—more than three football fields—so bidders had to present a solution for moving plumbing waste across this expanse plus another 100 feet (31 meters) or so beyond its walls to the sewer main. Sanicubic No. 5 has 4 DFUs that are pumped to join the cumulative flow. 53 total DFUs are pumped another 275 horizontal feet out of the building to the sewer.
That made the problem tougher. “If you applied the normal plumbing pitch that has to go in pipes,” Warner explains, “you would have more than 20 feet [6.1 meters] of drop” across the building. But the first floor is only 12 feet (3.66 meters) high. All of the ground floor toilets are Saniplus macerating units, also made by Saniflo. These upflush units can be installed directly on top of the floor.

A SOLUTION WITH TEETH
Enter Al Warren, a licensed plumbing contractor for more than thirty years and owner of Warren Brothers Mechanical Contractors in Stafford Springs. He won the contract based on a design that uses a series of Sanicubic duplex grinder pumps, made by SFA Saniflo Inc. SFA Saniflo Inc. is the only manufacturer offering a line of macerating toilet systems and gray water pumping systems for residential and commercial applications, so this solution was right up their alley. A ceiling panel has been removed to reveal the discharge line, which contains the effluent from the second-floor restrooms, flowing down into Sanicubic 1.
“The concept took a little thought, but really nothing is complicated about it,” Warren says. He worked with Rob Pellegrini, branch manager at the Granite Group in Colchester. “We batted it back and forth and came up with a plan.”
The result was the installation of five duplex grinders, positioned at intervals on the ground floor, along the length of the building. This created a “stair effect” that achieved the right pitch in the pipe to accommodate the extreme length of the sewer line. “Everything is located in one area,” Warren says. “It’s easy access—just pop the cover off and anything that could need service is right underneath that cover”.
The duplex grinders are installed right on the floor—there is no need to dig. They can handle waste matter from multiple plumbing fixtures, without storing sewage, as sewage ejectors do. Each one pumps effluent up through small diameter pipe into the main and out to the sewer. They work in concert, handling cumulative waste for the entire two-story building. The Remington Rand building is nearly 1000 feet (304.8 meters) long. The Mattabessett River lies beyond the rear of the building.
FROM DIRTY JOB TO PLEASANT SURPRISE
Al Warren had not used Saniflo products prior to this job, but the installation was straightforward. “I was pleasantly surprised,” he notes. “Sanicubic is very versatile, and once I got into it, I could see how easily adaptable to a situation it can be. I’d definitely use it again.” Swampy area on the Remington Rand property. Groundwater was in the old clay pipes and contamination was found everywhere. Digging to install sewer and plumbing lines wasn’t an option.
While the Remington Rand building may be unique, Warren says duplex grinders are a good option for any application and a great alternative to septic systems and sewage ejectors. The Sanicubic can handle waste from toilets, tubs and showers, sinks, washing machines, and dishwashers. The Sanicubic No. 1, the first of five in the system, is installed at the front of the Remington Rand building, pictured here.
The renovated Remington Rand facility will provide an additional revenue stream for the city of Middletown. “We’re embracing a very creative solution, using Saniflo to send all of the sanitary waste into a city sewer instead of our river,” William Warner concludes. “It has huge environmental benefits.”