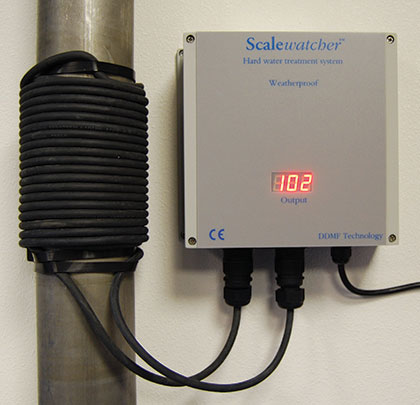 San Antonio Housing Agency (SAHA) is saving thousands of dollars a year at its Woodhill Apartments on expensive maintenance and replacement boilers every six to nine months following the installation of the patented, award-winning Scalewatcher computerized, electronic water-conditioner from Scalewatcher North America.  Purchased following a successful four month trial at the apartments, the Scalewatcher has successfully kept all four boilers scale free since it was installed.
MEETING AN IMPORTANT NEED
SAHA provides housing assistance to over 70,000 children, adults and seniors through its Public Housing, Section 8 Housing Choice Voucher and Mixed-Income housing programs. The Agency owns and manages 6254 public housing units at seventy-one properties, employs more than five hundred individuals, has an annual operating budget of $172 million and real estate assets valued at over $500 million.
The Agency chose the Woodhill apartments as the BETA site because in spite of attempts at water treatment, it had a consistent history of domestic hot water boiler failure due to scaling.  At the site a 100 gallon boiler typically had a life span of six to nine months.  With four boilers in the boiler room the cost of replacing each boiler was $3,590.
KEEPING WATCH ON THE BOILERS
A Scalewatcher unit was installed on to the pipes in the boiler room to treat all four boilers. However, SAHA’s Project Manager, Neville Blair decided that the newest boiler would be the ‘control’ boiler for the purpose of the test.  After 64 days a section of copper pipe was removed for inspection and it was observed that there was no scale at the bottom of the boiler.
After 180 days the heater tank was valved off and drained.  It was noted that there was soft ‘sand- like” deposit on the bottom of the tank and the copper coils were clean. Previously, scale would have formed a hard crust on the copper coils and at the bottom of the tank. The new boiler at this stage would be halfway through its useful life.
THE IMPORTANCE OF PREVENTATIVE MAINTENANCE
“We had no hestiation in buying the Scalewatcher,” said Neville Blair.  “Previously we had used a liquid water treatment that had cost $200 per month and had been ineffective.  Since Scalewatcher has been installed we have had to replace just one boiler, which we believe was due to age and not scale.”
Twelve months following the Scalewatcher installation, the bottom of the heater was once again inspected and the copper coils were found to be clean. The “sand-like” deposits on the bottom of the tank are removed from time to time as part of a Preventative Maintenance program.
FIT AND FORGET
Scalewatcher North America has a range of environmentally friendly units that will combat the effects of hard water limescale without the use of chemicals or salt. A fit and forget system, Scalewatcher is easy to install and requires no plumbing, maintenance or chemicals. Using modern, integrated circuitry the Scalewatcher emits an electronically applied force field, induced by a coil wrapped around the outside of the pipe work, which keeps the minerals in suspension and thus prevents limescale forming. The unit can be attached to all types of pipework material, regardless of size.
Scalewatcher models are based on continuous research and over twenty-five years experience and expertise as market leaders in electronic scale control with countless units sold worldwide.  The patented Scalewatcher systems start at $248.00 USD and are capable of treating pipe sizes from 1 to 120 inches (25.4 millimeters to 3 meters). All Scalewatcher systems come with a full performance guarantee and are shipped throughout North America. ■
About The Author
Jan de Baat Doelman is president of Scalewatcher North America Inc. The Scalewatcher is an environmentally friendly alternative to chemical and mechanical descaling. Launched in the 1980s it has successfully treated hard water problems for industrial manufacturers as well as water companies, oil producers, farmers, horticulturists, shipping companies, shopping centers, school, universities and government establishments. For more information, call 610.932.6888, email sales@scalewatcher.com, or visit www.scalewatcher.com.