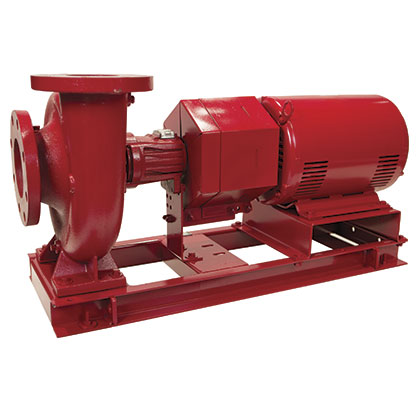 In part 1 of this overview, we discussed E.J. Gossett and R. Edwin Moore’s important roles in bring Bell & Gossett to a prominent position in both commercial and residential markets. Both Gossett and Moore realized the importance of strong relationships with employees and manufacturer representatives. Another important figure during this time the company was William A. Boone, who also served as company president. Boone began with B&G in 1941 as a specialist in heat exchanger products. He married Gossett’s daughter, Eleanor, and worked at the company for more than thirty years in various capacities, including president, until his retirement in the mid-1970s. Boone’s start with the company coincided with one of the most important periods in B&G’s, and America’s, history: the Second World War.

During World War II, B&G was commissioned to produce no less than fifteen products for the war effort, which accounted for 60 percent of its business during that time. Relying on its experience in building centrifugal pumps, B&G redesigned another company’s existing bilge pumps used on amphibious trucks and landing craft, producing more than 50,000 pumps valued at one million dollars.

B&G also produced 5,000 to 6,000 tank track pins each day, for a total of 2.5 million during the war, filling a critical need. The pins connect the metal links on the moving track that covers the wheels of the tank. Other wartime products included evaporators for Navy cargo ships, laundry tanks for Army portable laundry equipment and self-contained steam jet cleaners for use on airplane and other engines.

“In more than one instance, the government turned to B&G to manufacture products when other companies could not deliver, which earned B&G official commendations for providing high-quality products and additional contracts,” says Mark Handzel, vice president, product regulatory affairs, and director, HVAC commercial buildings for Xylem, now the parent company of the B&G brand. “That was something everyone at B&G was very proud of—from the people on the manufacturing floor to the president of the company—and still is a source of pride for the brand.”

B&G is well known for its emphasis on education through Xylem’s Little Red Schoolhouse, a former cafeteria turned training center on the company’s Morton Grove campus.

“B&G’s focus on education actually dates back to 1934, when the company issued a Six-step Manual as a training supplement for company sales representatives,” Handzel says. “That led to a company handbook in 1940 that contained the very latest in technical instructions for design and installation of B&G products, thousands of which were distributed to government procurement agencies and contractors and subsequently used by universities and technical schools.”

Today, B&G is educating even greater numbers of HVAC professionals in the basics of hydronic systems with the debut of its Online Little Red Schoolhouse in 2015.

Since its inception in 1954, more than 60,000 engineers, contractors and other HVAC professionals have been educated at the Little Red Schoolhouse on the latest advancements in centrifugal pumps and HVAC system design.

B&G’s acquisition by ITT Corp. in 1963 offered increased opportunities for sales of the B&G brand worldwide. The Morton Grove campus has since expanded to more than 500,000 square feet on 31 acres, most of which took place during the 1960s; a multimillion-dollar plant revitalization occurred from 1988 to 1993. Also during the 1980s, B&G engineers pioneered microprocessor control of pumping systems, pressure boosting, variable speed pumping and heat transfer packages. In 1982, the Series 90 close-coupled inline mounted pump was introduced and in 1990 B&G released its highly acclaimed equipment selection program, ESP Plus.

Just as they did in the early days of B&G, engineers are scrutinizing every aspect of HVAC and plumbing system design to develop more efficient and cost-effective solutions for customers. Today, B&G products are installed in high-profile facilities around the United States, where innovation and efficiency are highly prized, including Levi’s Stadium in California and the National Renewable Energy Lab in Colorado.

B&G’s current portfolio of award-winning and industry-leading products is based on its POWER OF e platform, which focuses on energy efficiency and systems solutions. Its Efficiency Island concept is unique in the industry and is a critical element of the POWER OF e as it creates higher levels of efficiency over a broader range of operating conditions. The redesigned Series e-1510 end suction centrifugal pump, newly launched Series e-80 centrifugal pumps and its ecocirc XL large wet rotor circulator pump are just a few of the latest products.

“For 100 years, B&G has been an industry leader in efficiency, expertise and education,” Handzel adds. “From our extremely knowledgeable representatives, industry-leading training and highly efficient products, we are proud to be a leader in the HVAC industry. As we look ahead to the next century, our goal is to continue to provide customers with solutions that help them achieve greater overall system efficiency.”

Larry Konopacz is the manager of training and education at Bell & Gossett’s Little Red Schoolhouse. He has worked for Xylem Inc. and the company’s Bell & Gossett brand in a variety of training, engineering and manufacturing capacities for more than 30 years. Konopacz earned BS and MS degrees in industrial technology at Western Illinois University, and an MBA in managerial accounting at DePaul University.