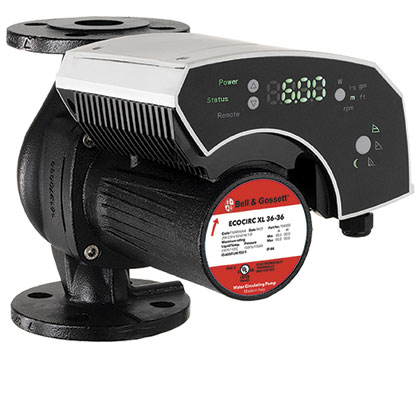 When young engineers W.C. Bell and E.J. Gossett formed the Bell & Gossett Company on a cold Chicago day in January 1916, they didn’t intend to become one of the world’s leading manufacturers of commercial pumps. In fact, they didn’t start out making pumps. But as men of opportunity and innovation, they soon realized there was a future in hydronic heating.

As early as 1918, the Bell & Gossett Company began manufacturing potable water heaters, in addition to its original business of manufacturing and selling case hardening compounds. It was that entrepreneurial spirit that spurred the company’s rapid growth, sending Bell to Cleveland to preside over the acquisition of another case hardening company, while Gossett directed the company’s expanding Chicago operations. (Gossett later bought out Bell’s interest in B&G.)

In 1929, buoyed by additional business acquisitions and expansions, the company started producing heat transfer equipment and began development of forced hot water heating systems. In 1930, the company introduced a booster pump—its most important development—as well as flow-control and motorized valves, which remain core products of the B&G brand.

“Today we focus on bringing products to market that incorporate the latest technologies and deliver the highest levels of efficiency,” says Mark Handzel, vice president, product regulatory affairs, and director, HVAC commercial buildings for Xylem, now the parent company of the B&G brand. “That has always been the mission of B&G, and it hasn’t changed since our very early days.”

Inventions by B&G revolutionized building heating systems and improved efficiency, helping to cut fuel costs by 25 percent or more. Prior to the 1920s, about 80 percent of home heating systems were gravity hot water or steam systems. B&G’s Forced Circulation Hot Water House Heating Systems dramatically improved the old gravity hot water systems due to the use of the small electrical booster pump, which circulated heated hot water through the system much faster than had been previously done. Forced hot water heating proved so successful from the standpoints of greater comfort and economical operation that it became the industry standard.

“One of the primary reasons for the Bell & Gossett Company’s early success was the pursuit of the best and the brightest talent of the day,” Handzel says. “E.J. Gossett instilled an organizational philosophy that every employee should have a goal. He had a genuine connection with his employees and encouraged excellence.”

Among those who helped lead B&G to prominence was R. Edwin Moore. He joined B&G as director of sales in 1926, and became president in the late 1950s, though Gossett remained chairman of the board. Moore was known for his enthusiasm for his work and penchant for telling stories. His strong desire to provide quality products at competitive prices and his ability to recognize industry trends further propelled the success of B&G in both commercial and residential markets.

“Another important person to note is B&G engineer Gilbert Carlson, who was one of the great pioneers of this industry,” Handzel adds. “He did more to advance the field of hydronic heating than any other individual.” Carlson worked at B&G from 1946 until his retirement as director of technical services in 1988. He held seven U.S. patents and was recognized internationally as one of the foremost authorities on hydronic heating systems.

“He was a genius,” Handzel says. “He not only invented heating products, but he developed new ways to design systems, which often began with a problem and led to breakthrough thinking in the science of hydronic heating.”

Carlson was an ASHRAE Fellow and the recipient of the Distinguished Service Award and Life Member Award.

From 1939 to 1955, B&G’s growth was substantial as it concentrated on engineering, developing, and producing components to improve heating systems. According to the 1940 U.S. Census, there were 7 million steam and hot water systems in the U.S., which meant an unlimited field for B&G, as many of those systems could be modernized with the installation of its products. In 1943, B&G began manufacturing large centrifugal pumps as commercialization led to larger buildings with hydronic systems.

During the 1940s, B&G developed a mechanical sealed pump, known as the 1522, which is still part of the B&G portfolio. It also implemented hydraulic designs in another new line of end-suction industrial pumps known as the 1531.

In 1950, B&G developed a revolutionary mechanical seal that used a ceramic material with an aluminum oxide base. Trademarked as Remite, the material proved to be as hard as diamonds and able to withstand many of the fluids and system problems that prevented the use of mechanical seals in the pump industry.

During this period, the company also acquired a number of companies to fortify its portfolio. B&G expanded from 144 employees in 1939 to a nationwide company with 947 employees in 1955. Sales for those years jumped from $1.3 million to $25.2 million. In 1941, B&G moved its headquarters from Chicago to a newly constructed 200,000-square-foot facility on 20 acres of land in Morton Grove, Illinois.

“Not to be lost in this tremendous growth are the contributions of the B&G workforce and the longtime B&G stocking representatives,” Handzel notes. “Many of those associations go back nearly to the company’s founding. R.D. Bitzer, R.L. Deppmann and Mulcahy companies and Blackmore and Glunt Inc. are among B&G’s longest associations,” Handzel notes.

Next month, in part 2 of this overview, we will bring Bell & Gossett’s innovation into the modern era—exploring both the future of the B&G product portfolio and especially the continued focus on instruction, education, and application.

Larry Konopacz is the manager of training and education at Bell & Gossett’s Little Red Schoolhouse. He has worked for Xylem Inc. and the company’s Bell & Gossett brand in a variety of training, engineering, and manufacturing capacities for more than thirty years. Konopacz earned BS and MS degrees in industrial technology at Western Illinois University, and an MBA in managerial accounting at DePaul University.