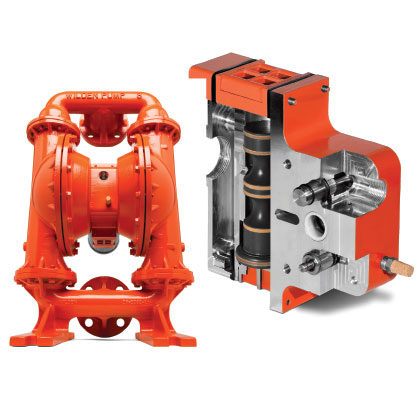 The circumstances that prompted Jim Wilden to develop the air-operated double-diaphragm (AODD) pumping principle six decades ago have taken on almost mythic status: a ruptured water pipe, a flooded workshop, and an exclamation from a coworker that “Slim” (Wilden’s nickname) could “make a million dollars” if he could invent a solution.

In the ensuing sixty-plus years, those words have proven to be prophetic as the AODD pump technology that was said to be “conceived out of necessity, born in the arms of innovation, and inspired by sheer will and determination” has become a go-to choice for operators in rough-and-tumble industries like mining and heavy construction who require a pump that can easily and reliably pump water, slurry, or any finely divided substance, such as cement, in diverse operating environments.

Since their invention, AODD pumps have earned a reputation as a technology that is well-suited for utilitarian, auxiliary or basic liquid-handling and transfer applications thanks to their design characteristics that allow them to obtain dry self-prime, run dry, maintain suction lift up to 30 feet, withstand deadhead pumping conditions, operate while completely submerged, and pass solids up to 3 inches in diameter. In reality, though, these characteristics have also allowed AODD pumps to be extremely effective in more delicate liquid-handling applications, including those that are prevalent in the pharmaceutical and food-and-beverage industries.

Thanks to a series of technological advancements from Wilden® that have further economized the AODD pump’s method of operation, the unit can now be considered a true “process” pump and has gained acceptance as such in diverse industries like paint and coatings, ceramics, adhesives and sealants, oil and gas, food and beverage, pharmaceutical and cosmetics, as the following examples help to illustrate:

When one of the largest independent chemical distributors in the United States relocated to a new, larger facility with expanded warehousing, blending, packaging, clean room and warm room areas it needed a pump technology that could perform well in a number of unique operating environments. The solution was to outfit the facility with bolted AODD pumps, which possess the capability to handle a plethora of different chemicals that would need to pass safely through the facility. “We wanted better product containment and the AODD pump has been fool-proof and has given us a great performance with no worries,” said the distributor’s facilities maintenance manager.

Featured Image: Among the benefits that a Wilden® air-operated double-diaphragm (AODD) pump outfitted with the Pro-Flo® SHIFT ADS can offer, chemical processors are significant savings in air consumption, more yield per standard cubic feet per minute (scfm), easy maintenance, and the ability to handle a wide range of corrosive or hazardous liquids.

Above: The charts above illustrate how the next-generation operation of the Pro-Flo® SHIFT ADS from Wilden® is able to eliminate the wasteful air overfilling that occurs at the end of each pump stroke with traditional AODD pump designs.

Also, a leader in solvent production for use in the Indonesian paint-and-coatings market was looking to improve the operational efficiencies at its production plants, where the time needed to load and unload holding tanks was becoming prohibitive. After performing a series of onsite tests, the plant’s operators learned that advanced AODD pump air motor technology could not only reduce the transfer times through higher flow rates, but could do so with decreased compressed air consumption compared to competitive products, thus reducing the operating costs of the fluid transfer.

Finally, a Spanish company that produces printing inks was having problems with the gear pumps that were being used in the production of water, solvent and UV-based inks for flexography and digital printing systems. Namely, the gear pumps were very inefficient in their operation and constant breakdowns were leading to increased downtime and maintenance costs. The solution was found in replacing the ill-performing gear pumps with AODD pump technology featuring an advanced air engine that requires less air while still delivering the same flow rates. “Compressed air as an energy source is relatively expensive, so if we can do the same work with half the energy it is very important,” said the company’s president. “For me, the AODD pump is a very good choice and I am sure the results will demonstrate that.”

While these examples may show that AODD pumps can be considered process pumps in critical applications across a wide variety of industries, this has only become possible once some noteworthy refinements in their operation were made.

THE AIR IN THERE

Despite the fact that AODD pumps have, from day one, proven their effectiveness in utilitarian liquid-transfer applications, there has always been one annoying glitch in their operation: at the end of every pump stroke, a small, but still significant, amount of air was wasted. This kept the pump from operating at its most efficient and added to its bottom line cost of operation.

Because of that, AODD pump manufacturers–led, of course, by Jim Wilden–were always searching for ways to decrease or eliminate the air loss at the end of the pump stroke. This has led to a series of advancements in Air Distribution System (ADS) technology that have enabled the AODD pump to optimize air usage (and cost) while still maintaining its standard-setting operational characteristics.

While air loss has been a constant concern within the operational window of AODD pumps, the earliest ADSs were designed first and foremost to battle another operational irregularity in the AODD pump’s performance: stalling and icing. It was only once those performance inhibitors were conquered that designers turned their attention to developing ways to more efficiently govern the pump’s air consumption.

One of the first ADSs designed to promote energy efficiency featured a dial that could be used to tune the pump’s operating speed by restricting the amount of air that was allowed to enter the pump. It’s a fact of AODD pump life that a slower running pump is more efficient. For example, a dial-in ADS running at full throttle may consume 50 standard cubic feet per minute (scfm) of air in order to pump 100 gallons per minute (gpm) of fluid.

While the dial-in ADS represented an undoubted advance in AODD pump operation, there was still more field that needed to be plowed if pump performance was to hit the sweet spot in optimized air consumption. That day came in 2013 with the development of a new ADS technology that featured a revolutionary air control spool, which is shaped, more or less, like an hourglass. This innovation was driven by an evaluation of the pressure dynamics that occur within the AODD pump during its operation.

This evaluation clearly revealed that air consumption was significantly impacted by an increase in air pressure at the end of each diaphragm stroke. Specifically, when the shaft would come to a full stop at the end of each stroke a shift signal would be sent to indicate that the flow of air should cease. However, there was a small time lag between the stopping of the shaft and the sending of the signal, meaning that the full force of the compressor continued to push compressed air into the air chamber, but that air was not doing any actual work and was lost to the atmosphere upon exhaust.

The function of the air control spool reduces the amount of air that is allowed into the pump at the end of the stroke, which drastically reduces the amount of “wasted” energy that had traditionally been “force fed” into the pump. This allows the AODD pump to experience up to 60 percent savings in air consumption, while delivering more yield per scfm than AODD pump models that feature legacy ADSs.

THROUGH THICK AND THIN

The favorable reputation of AODD pumps is built on the technology’s versatility, or ability to handle a wide range of liquids with varying characteristics. One of the most important is viscosity, or the thickness of the liquid that is being transferred, since the pump’s true best operational efficiency is only achieved if the lowest possible amount of scfms of air are consumed while delivering the highest possible flow rate, no matter the viscosity.
Specifically, in the operation of AODD pumps, slip is almost eliminated, regardless of the viscosity of the fluid, as it is controlled by the ball check valves in the pump. Other technologies such as gear, screw and lobe pumps have fixed tolerances to control slip, which makes them unable to adequately adjust to viscosity changes.

When working with a centrifugal pump, the fluid viscosity is a design factor in the pump equipment and its selection for a specific application. Impeller dimensions and styles are specifically tailored to be compatible with thick or thin fluids, making moving a pump from one application to the other not really workable. Working with an AODD pump, however, the viscosity need not be a factor for operation. This is the real benefit of the AODD pump in this realm—its ability to handle multiple or different viscosities without regard for equipment setup.

For example, gear pumps may be a good choice for very thick oil or viscous liquids, but they are poor choices for thinner liquids like ethanol or water. The AODD pump, on the other hand, is a jack-of-all-trades that doesn’t care if the fluid is thick, thin, particulate-free or laden with particulates; its design allows it to pull in the liquid, no matter its composition, and drive it downstream. AODD pump manufacturers do publish viscosity correction tables, but these are simply helpful in predicting pump performance given specific system discharge and air inlet pressures and a known viscosity. In reality, the design of the AODD pump does not need to change for liquids that have highly viscous or very thin consistencies.

AODD pump manufacturers are also taking steps to improve the flow path of their pumps, which will make it even easier to efficiently transfer highly viscous or particulate-laden liquids. In fact, some newer AODD pump models with redesigned and optimized wetted paths deliver flow rates up to 50 percent higher than legacy models. This enhanced flow capability may also allow the operator to use, for example, a 2-inch pump where a 3-inch model may have been the choice in the past, with attendant initial cost of ownership and maintenance cost reductions—smaller pumps, smaller price.

A caveat must be noted, though, that the AODD pump does have a few performance limitations, most commonly on the suction side of the pump, since the only pressure that is available to bring the liquid to the pump is atmospheric. In cases of extreme suction conditions, the physical location of the pump relative to the pumped media is a crucial component of application success, i.e. the pump should be moved as close to the source of the fluid as possible. This will reduce the line friction leading to the pump. Whenever possible, locate the pump below the supply tank—this will enable gravity to assist the “feeding” of the pump. Also, eliminate as many fittings and elbows on the suction side of the pump as possible. Operators and system designers may additionally consider over-sizing the plumbing leading to the pump, all in an effort to reduce friction on the suction side. These are some of the tricks of the trade that can be used to take advantage of the AODD pump’s versatility and ability to optimize air consumption and liquid flow rates.