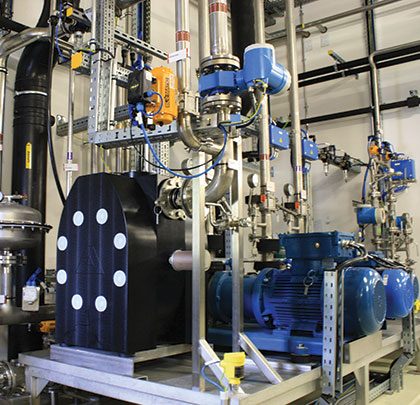 There’s an old adage, usually credited to the first chancellor of Germany, Otto Von Bismarck, that “Laws are like sausages, it is better not to see them being made.” The implication is that reaching the consensus required to create a new law can oftentimes be unpleasant and it may be best not to know what the actual “ingredients” are and how that consensus was reached.
The same can said for a number of industrial processes, whether it be the refining of petroleum products, manufacture of pharmaceuticals or the treatment of wastewater. In many cases, these process require the use of many dangerous chemicals. Among them can be strong acids and caustics like hydrogen chloride (HCl), hydrogen fluoride (HF), nitric acid (HNO3), sulfuric acid (H2SO4), potassium hydroxide (KOH) and sodium hydroxide (NaOH). Then there are dangerous solvents like toluene, a colorless, water-insoluble liquid that can cause a series of severe reactions in the body when exposed to humans, and xylene, a slightly greasy, colorless flammable liquid with some level of acute toxicity.
SAFELY HANDLING DANGEROUS CHEMICALS
In contrast to being dangerous, these substances are also invaluable in the manufacture of thousands of consumer products and the production of components that are used to create consumer goods or facilitate industrial processes. The challenge, then, for manufacturers and users of these dangerous chemicals is to construct, handle, and transfer them in a way that eliminates any chance for their release into the atmosphere where they can harm humans or the environment.
This article will illustrate how one type of pumping technology—positive displacement (PD) solid-body plastic air-operated double-diaphragm (AODD) pumps—possesses the design and construction features that are necessary to guarantee full containment of dangerous chemicals, while also offering working characteristics that enable the highest level of operational efficiency to be achieved.
THE CHALLENGE
Any time substances comprised of dangerous chemicals are handled there is an inherent risk involved. This risk stems from the fact that the release of these chemicals can lead to severe health consequences for humans and animals, as well as damage to the environment. While safety in handling these chemicals is a top concern for those who come in contact with them, there is also a secondary one: these chemicals are often very expensive and any loss due to leakage or release has a direct effect on the manufacturer’s bottom line.
However, keeping these dangerous chemicals fully contained is often easier said than done. Since many can also be highly corrosive, the pumping equipment used to transfer them is prone to chemical attack if the materials of construction are not compatible with the acid, caustic or solvent. Materials of construction are not the only factor to consider when determining if a pump should be used to handle dangerous chemicals. Another area to focus on is the actual design features of the pump. For example, if the design incorporates mechanical seals or packing, they may be prone to leaking. 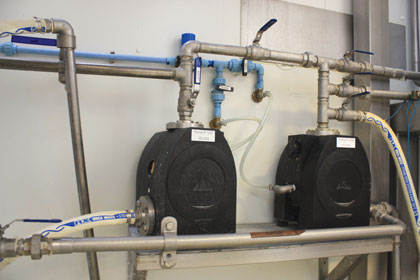 The plastic solid-body construction of Almatec® E-Series AODD Pumps eliminates the small crevices or cavities that can be found in injection-molded models. It is in these crevices that liquids can accumulate and leak paths can be created.
Attempts have been made to circumvent the shortcomings of pumps that feature mechanical seals through the implementation of magnetic couplings or double barrier seals. While these methods of containment do outperform mechanical seals, there are other shortcomings that limit their effectiveness. The viscosity range of liquids that are transferred by pumps with magnetic couplings is limited by the amount of transferable torque that can be created. The use of pumps with double seals or barrier liquids can be impractical due to their high cost and the elevated level of maintenance required.
Some common pump styles that have traditionally been used to handle dangerous chemicals include lobe, gear and centrifugal models. While they may be constructed of chemical-compatible materials, their design features mechanical seals, the performance of which can be compromised over time, raising the possibility that leaks will occur.
In terms of actual performance, these competitive pump styles also have shortcomings when it comes to the reliable, energy-efficient transfer of dangerous chemicals. Gear pumps, for instance, move liquids through the meshing of gears. Over time, however, as the gears wear, the pump’s volumetric consistency is adversely affected, resulting in unreliable flow rates and increased energy usage. The operation of both gear and centrifugal pumps can create turbulence in the pumped liquid, which can lead to shearing that can damage or alter the liquid’s chemical properties. Since they are not true PD pumps, lobe models can be subject to product slippage, which can make attaining a consistent flow problematic and result in compromised production rates.
A LOOK AHEAD
In next month’s conclusion, we will offer a list of features and benefits that handlers of dangerous chemicals need to look for when selecting an AODD pump, as well as compatibility and volumetric consistency concerns presented by some types of pumps during operation. ◆
Peter Schüten is the Almatec® product manager with Almatec® Maschinenbau GmbH, Kamp-Lintfort, Germany. He can be reached at peter.schuten@psgdover.com or +49.2842.961.0. Almatec is one of the world’s leading manufacturers of air-operated double-diaphragm (AODD) pumps, owns numerous patents and has one of the largest product ranges in the field of pneumatic diaphragm pumps. Almatec is part of PSG®, a Dover company. PSG is comprised of several of the world’s leading pump brands, including Abaque®, Almatec®, Blackmer®, Ebsray®, Griswold™, Neptune™, Maag Industrial Pumps, Mouvex®, Quattroflow™, RedScrew™ and Wilden®. You can find more information on Almatec and PSG at www.almatec.de and www.psgdover.com. 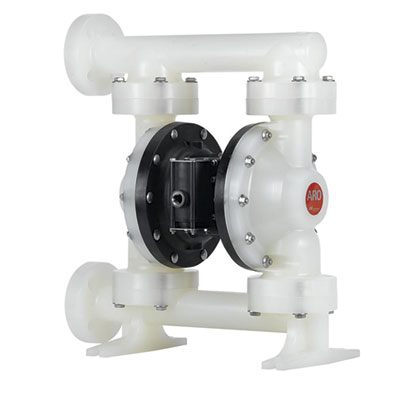 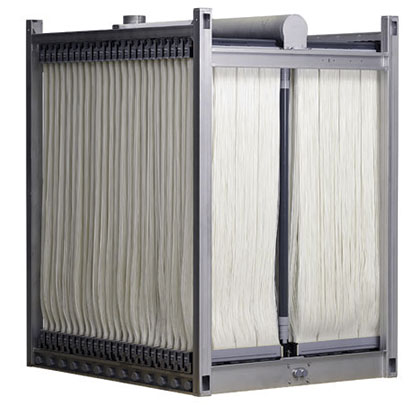 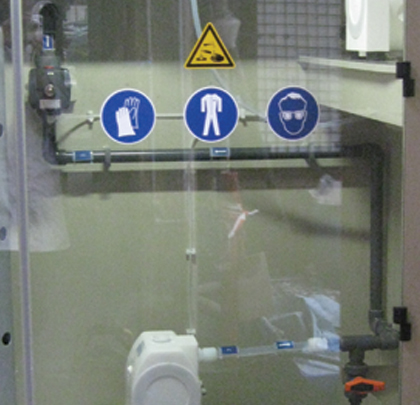