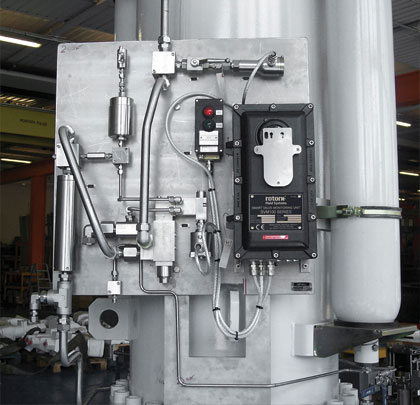 Although a great deal of media attention focuses on the future of power generation—specifically the push toward a combination of renewable resources and nuclear power—the majority of the power people use today still comes from legacy sources such as the hydrocarbon industry. However, that is not to say that the drive toward alternative energy sources has not made an impact on the current landscape, far from it. In fact, today’s energy providers—the hydrocarbon industry, in particular—search for ways to be more efficient and to improve the safety of their production systems.
Regulatory bodies like the International Electrotechnical Commission (IEC) and the International Society of Automation (ISA) play a large role in setting safety guidelines for mechanical operation in a wide range of facilities. However, when it comes to providing energy, the shut-down time required for safety testing creates a domino effect of stress on other applications and complaints from end users. The potential long-term damage from a system failure can be catastrophic. Rotork believes they have developed a method for adding safety while extending the life of a system—one that also meets the standards of regulatory bodies.
PARTIAL STROKE TESTING
Partial stroke testing (PST) is a function used in a safety instrumented system (SIS) to enable the operator to identify possible failure modes on a shutdown or emergency shutdown (ESD) valve without the need to completely close the valve and hence disrupt the process. Partial stroke testing is an accepted hydrocarbon industry standard technique that is quantified in detail by regulatory bodies such as the IEC and ISA.
The partial valve stroke prevents unexpected failure on demand of the safety function and demonstrates that certain potential problems that would otherwise go undetected, such as spring fractures in the spring chamber of the pneumatic actuator, are not present. Consequently, the interval for testing for these otherwise undetected errors can be extended.
SMART VALVE MONITORING
The Rotork SVM (Smart Valve Monitoring) system has been selected to provide a networked solution for digital valve monitoring and partial stroke testing on a large scale oilfield installation in the Middle East. The system is designed to deliver predictive maintenance information from widely distributed areas for use by the operators to reduce shutdowns and improve overall plant efficiency.
This is made possible by the ability of the SVM to be integrated into an existing Ethernet and fiberoptic infrastructure, enabling over one hundred monitored valve actuators on wellheads at numerous locations to be networked over distances of 6 miles (10 kilometers) or more.
The SVM field control units on this project are attached to the ESD circuits for shut off valves installed in sets of two and four on more than fifty wellheads. Analysis is performed on the SVM server computer in the centralized control room. Communication between the wellhead sites and the computer is fully integrated within the operator’s existing network infrastructure. The SVM field units are incorporated into the Ethernet network that links other equipment and instrumentation at each wellhead site. A fiberoptic link is then used to transmit the data to intermediate engineering and control stations at two manifold sites. From these sites, fiberoptic links are again used to transmit data from all the wellheads to the centralised control room. 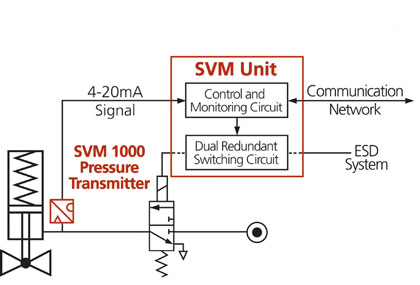 EXPANDED FEATURES
The Rotork Smart Valve Monitor incorporates several features that are not available from other systems, as well as providing detailed diagnostic data that allows the operator to plan for strategic preventative maintenance. The key to the SVM’s reliable performance is its separation from the valve’s control system. This enables the operator to design the control system exactly to suit the routine and safety requirements without having to compromise for the testing program.
The SVM system is powered by the control signal to the actuator’s solenoid valve. The monitoring function is then provided by a pressure transmitter located between the solenoid valve and actuator which records the instrument pressure changes whilst the valve is moving. Any change in the valve performance is detected and identified by a change in the pressure wave exiting the actuator. The simple, self-contained design of the SVM enables it to be used with the most complex control mechanisms and makes it impossible for the SVM to prevent the valve from closing on demand.
Analysis of the 4-20mA signal from the pressure transmitter during the partial stroke test is performed using SVM software to confirm the correct functioning of the valve or identify a fault. To achieve this, the output pressure curve of the transmitter is compared with the pressure signature of the actuator, obtained during commissioning. Identified faults can include valve obstructed, damaged actuator cylinder, seized valve or failsafe spring failure, stem shear or disconnected valve, stiff valve, increased breakout torque, damaged valve seat, internal cylinder corrosion, exhaust restriction, and sticking solenoid valve.
MAXIMUM SAFETY PERFORMANCE
The SVM always tests every final element component of the shutdown system and is capable of detecting all the failure modes of the valve, actuator, and controls that are possible during a partial stroke test. It is designed to ensure that operators obtain the maximum safety performance from their systems while running their plants at maximum efficiency.
The benefits of using the SVM are, therefore, not limited to simply reducing the probability of valve failure on demand. Gains can also be made in the capital cost and the production performance of a plant. For example, the requirement for costly redundant valves can be reduced or eliminated. Production performance can be enhanced by extending the periods between compulsory plant shutdowns and predicting potential valve failures, enabling the pre-ordering of spare parts and identification of maintenance priorities. ■
_________________________________________________________________________
ABOUT THE AUTHOR
Richard Hudd is the sales and marketing director for Rotork Fluid Systems. He can be reached at richard.hudd@rotork.com. For more information, visit www.rotork.com.
_________________________________________________________________________
MODERN PUMPING TODAY, March 2013
Did you enjoy this article?
Subscribe to the FREE Digital Edition of Modern Pumping Today Magazine! 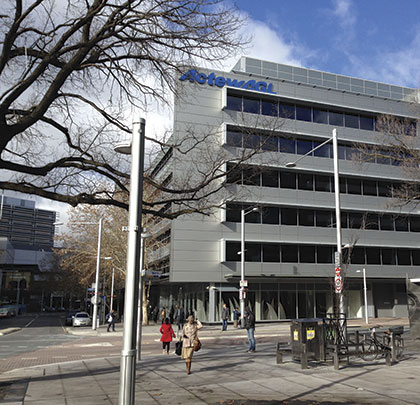 Reliable Energy Is Looking Up Down Under 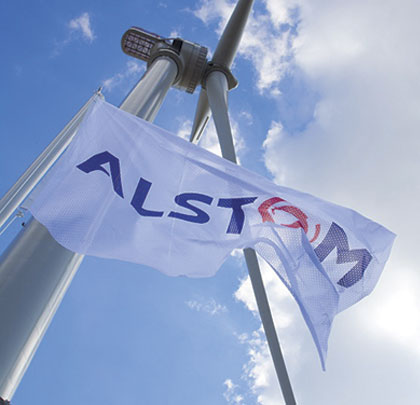 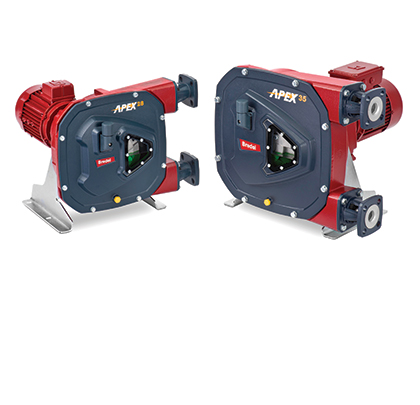