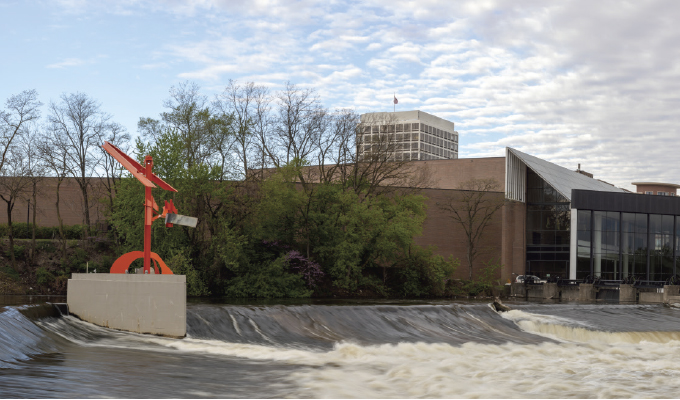 The St. Joseph River has long shaped South Bend’s economy, especially during the mid-twentieth century, when the river was the conduit to heavy industrial development such as Studebaker and the Singer Sewing Company. Despite the demise of heavy industry in the 1960s, the city is still the economic and cultural hub of Northern Indiana, and the St. Joseph River is still the central downtown attraction. Over the past decade, the city’s population has started to grow for the first time in fifty years, and the old Studebaker plant and surrounding area is being re-ignited as a technology center to attract new business.

To reduce the one to two billion gallons of polluted water dumped in the St. Joseph River annually, and the huge environmental, social, and economic costs associated with the ongoing issue, the city embraced a way to harness intelligent watershed technology to optimize its existing sewer system, without the need to build costly new gray infrastructure.

Prior to 2008, virtually every time it rained heavily, the city of South Bend faced sewer overflows into the landmark St. Joseph River because the city`s aging sewer system could not handle the excess discharge, an average of some one to two billion gallons annually.

In 2012, the city entered into a consent decree, agreeing to a long-term control plan (LTCP) of their sewer overflow estimated at $713 million in capital improvements plus financing costs. For South Bend, with a population of just over 100,000, this equated to a significant burden per citizen, which is economically unfeasible given that the average annual household income is around $32,000.

South Bend turned to Xylem for help to solve the overflow problem. In 2008, the city installed and commissioned a real-time monitoring system of more than 120 sensors located throughout the city’s urban watershed. After a thorough data review in 2012 the system was expanded with Xylem Wastewater Network Optimization, a real-time decision support system consisting of smart sensors and actuators. Xylem’s system enables the network to react to sudden wet weather events to avoid sewer overflows and prevent water pollution by trading available sewer capacity in real time and moving flows to under-utilized parts of the network.

Xylem’s Wastewater Network Optimization serves overflow information via SCADA screens to operators, via smartphones and tablets to field staff, and through web portals jointly developed with the city’s engineering staff. A key benefit is that operators have the ability to override the system at any time and take control.

Since 2012, the monitoring sites (currently 165) and thirteen automated gates and valves have eliminated dry weather overflows and reduced combined sewer overflow (CSO) into the St. Joseph River by more than 70 percent.

Since implementing its smart sewer program, dry weather overflows have been eliminated and combined sewer overflow volumes have been reduced by 80 percent, or roughly one billion gallons per year. South Bend has also enjoyed approximately $1.5 million in annual operating and maintenance cost savings. In addition, E. coli concentrations in the St. Joseph River have dropped by more than 50 percent on average, improving the water quality.

MODERN PUMPING TODAY, August 2022
Did you enjoy this article?
Subscribe to the FREE Digital Edition of Modern Pumping Today Magazine!