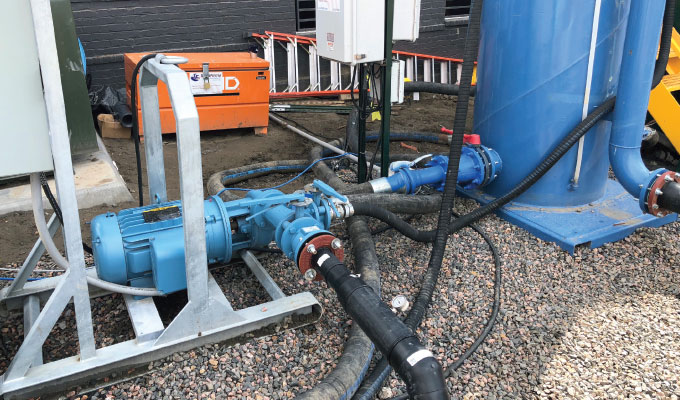 The highly anticipated Platte 15 multi-use mid-rise structure, located at 15th and Platte streets in Denver, has reached its final depth of 28 feet below ground surface. The installation of the temporary dewatering system by TerraFirma Earth Technologies is complete, and is in the maintenance phase. The general contractor Adolfson & Peterson Construction continues excavation in preparation for pouring of concrete slabs in late June.

Besides being Denver’s first mid-rise building made from cross-laminated timber (CLT) and offering a reduced carbon footprint, Platte 15 is the site of a rarely utilized means of groundwater control, known as ejector well dewatering. Though more costly up front, in the long run, this unusual use of ejector dewatering wells in controlling the ground water within soils typical to downtown Denver, has proven more reliable, and more cost efficient.

The added benefit of this unique use of the ejector well dewatering system was the lowering of groundwater to the maximum extent possible, allowing for the excavation and installation of the foundation mat slabs and water proofing membrane in “near-dry” conditions. “The proper installation of the foundation slabs and water proofing membrane under ‘near-dry’ conditions is extremely important to the structure,” explains Shiloh Hicks, project engineer.

There are generally three means employed by the dewatering contractor in controlling groundwater: vacuum wellpoints, deepwells, and ejector wells. The most commonly known in the Denver area are deep wells (sometimes referred to as sump wells).

Most contractors shy away from the ejector wells due to up-front costs; however, they are more often the best solution for Denver soil conditions (water-bearing alluvial soils over shallow bedrock). We are glad to see that the general contractor, Adolfson & Peterson Construction (AP), made the best decision for dewatering this project. Though ejector wells are typically utilized in much deeper excavations, they are well suited here because of the necessity to lower the groundwater to the very top of the confining bedrock.

Vacuum wellpoints, though versatile, were ruled out because of the suction limitation, generally 15 feet or less. Because ejector wells use a continuous, recirculating supply of water through an ejector body to create a vacuum at the bottom of each well, suction limits are not a concern (water is pushed up). Deepwells, though suited for deeper excavations, would have proven ineffective because of the proximity of the relatively shallow bedrock (20 feet below ground surface) in relation to the much deeper subgrade (28 feet below ground surface). Deepwells would have to be so closely spaced to achieve the desired results—they quickly would become cost-inefficient. Additionally, deepwells, which rely on the continuous flow of groundwater to cool the electrically driven submersible pump located near each well bottom, would quickly run dry under the Platte 15 soil conditions, making them a maintenance nightmare. The ejector well, on the other hand, is a self-priming pump. If it runs out of groundwater, it will proceed to pump air without interruption, until the groundwater returns.

Aerial view of the Platte 15 site. Clear view of the completed ejector pump station, groundwater filtration equipment, and ejector wells along the north side of the excavation (photo credit: Josh Peltier).

According to AP’s project manager, Shawn Brannon, Platte 15 is using the CM/GC delivery method, which gave AP the opportunity to employ the “choosing by advantage” process when hiring contractors. “This ensures a collaborative project team offering the best solutions for the particular project’s requirements, rather than choosing contractors simply by cost,” says Brannon. “TerraFirma was consulted well in advance of groundbreaking. Getting the project on firm ground is critical to the success of a project. We needed TerraFirma’s expertise early in the preconstruction phase. They were able to give us a detailed solution to the site conditions that we could detail out before we broke ground,” notes Brannon. He adds that the owner, Crescent Real Estate, applauded the “choosing by advantage” process and that it made the entire team engage wholeheartedly in the preconstruction problem-solving effort, which was a year in the making.

The Platte 15 property is being built out right to the property lines. Furthermore, the dewatering of the site was further complicated by the fact that one entire side of the site was inaccessible. The excavation has a perimeter footprint of approximately 800 linear feet (approximately 200 feet x 200 feet). Two levels of underground parking are planned; the excavation extends up to 28 feet bgs. TerraFirma installed sixty-four ejector wells around the site’s three accessible sides—one every 10 linear feet.

Also unique to the project was TerraFirma’s use of the sonic drilling methodology in advancing each borehole several feet into the bedrock. By employing the use of sonic drilling technology, not only were we able to fully penetrate the water-bearing alluvium overburden; we were also able to penetrate the highly weathered portion of the bedrock, which can often be another source of groundwater. With the sonic drilling methodology, the sixty-four ejector wells were installed and ready for operation just three weeks after mobilizing. In next month’s installment, we’ll take a closer look at how the finishing touches were put in place for this groundbreaking product.

David Giles is a geologist and president of TerraFirma Earth Technologies. He can be reached at dgiles@tfearth.com. TerraFirma, a Houston-based dewatering firm with offices in Denver, helps owners and contractors throughout the United States maintain acceptable groundwater levels for both temporary projects and permanent installations: getting the job on firm ground—before it starts. Past deep excavation projects include athletic stadiums, hospitals, high-rise facilities, transportation facilities, airports, tunnels, power plants, dams, waterways, petro-chemical plants, and municipal infrastructure sites such as pumping stations and treatment plants; as well as sewer and gas pipelines. For more information, visit www.tfearth.com.