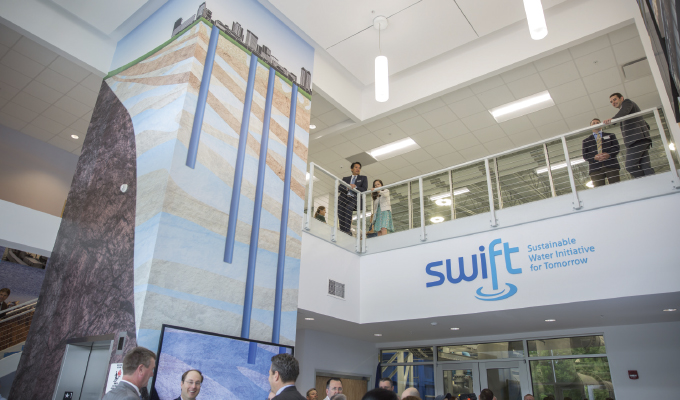 A United States Geological Survey report in 2013 found that land subsidence in Virginia’s Chesapeake Bay region has been occurring since the 1940s. Rates have varied over the years—ranging from 1.1 millimeters to 4.8 millimeters per year, according to the report—but the undisputable fact is that the region is sinking.

“This land subsidence helps explain why the region has the highest rates of sea-level rise on the Atlantic Coast of the United States,’’ the report says. “Data indicate that land subsidence has been responsible for more than half the relative sea-level rise measured in the region. Land subsidence increases the risk of flooding in low-lying areas, which in turn has important economic, environmental, and human health consequences for the heavily populated and ecologically important southern Chesapeake Bay region.”

In May of 2018, the Hampton Roads Sanitation District unveiled a research center that just might lead to a solution. The agency opened a $25 million research center as part of an innovative water treatment program known as SWIFT (Sustainable Water Initiative for Tomorrow) that will eventually pump more than 100 million gallons per day of treated wastewater into the Potomac Aquifer. The SWIFT water will be treated to match existing ground water.

“This is a great project, because 90 percent of what we currently discharge will no longer go into the Chesapeake Bay,’’ says Ted Henifin, general manager of the Hampton Roads Sanitation District (HRSD), the Virginia agency that is managing the project. “It will be treated, purified and put into the ground where it can provide other benefits.”

The SWIFT research center is the first phase in an ambitious project by the HRSD to halt land subsidence in the region. “The combination of sinking land and rising seas helps explain why the southern Chesapeake Bay region displays the highest rate of relative sea level rise on the Atlantic Coast, with Hampton Roads following only New Orleans as the second largest population center at risk of the negative economic, environmental and human health impacts of sea level rise,’’ SWIFT says on its website.

The research center is capable of producing one million gallons of SWIFT water (water treated to meet drinking quality standards each day). Officials hope to build the first full-scale facility by 2020, and four more by 2030 to recharge the Potomac Aquifer with more than 100 million gallons each day. The total output from each facility will range from 9 to 45 million gallons per day.

The process includes eight steps that begin by pumping highly-treated wastewater from the Nasemond Treatment Plant to the research center’s advanced treatment facility. Those steps include flocculation and sedimentation, which removes suspended solids by settling large particles to the bottom of the water column; ozone contact, which breaks down organic material and provides disinfection; biologically active filtration, which filters out suspended particles and pathogens and removes dissolved organic compounds through microbiological activity; granular activated carbon contactors that remove trace organic compounds and prepares the water for ultraviolet disinfection, which is the next step and provides a barrier to pathogens by disinfection with high intensity ultraviolet light. The process concludes with disinfection through chlorine contact, additional small chemical doses to closely match the geochemistry of the water already in the aquifer and finally, sending it into a recharge well, where the well conditions and surrounding aquifer water quality can be constantly monitored.

“One goal of this project is to treat without the large environmental footprint of membrane systems,’’ Henifin says. “The SWIFT Recharge is a first of its kind treatment, recharge, research, and public education facility.”

Two underground pump stations and a number of vaults are key parts of the process. The vaults and pumps are protected by channel frame doors manufactured by The BILCO Company of Connecticut. The doors are frequently used in exterior applications where there is a concern of water or other liquids entering the access opening.

The aluminum doors feature stainless steel hardware and engineered leaf assistance. They come in standard single- and double-leaf sizes, and can also be specified to meet unique access requirements. The doors are also constructed with corrosion-resistant materials, and include hold-open arm locks to ensure safe egress and a heavy-duty and positive latching mechanism to prevent unauthorized access. The doors have a twenty-five-year warranty.

“The doors met the quality and specifications that we needed for this job,’’ says Chris Robards, project manager for Crowder Construction, the company that constructed the research center. “They’re quality doors and we install them in a lot of jobs. It has to be easy to operate. These particular hatches are easy to open and close.”

Henifin says HRSD looked at the feasibility of recharge in 2014. One of the early challenges was convincing government officials that the project could work.

“It was a challenge to get decision makers to keep an open mind—not be swayed by opinions regarding groundwater and contaminants—and rely on science,’’ Henifin says. “We did extensive outreach to anyone and everyone in a position of power or perceived power, that may be approached about SWIFT. We stressed the benefits but were clear about the challenges and that we would take a measured approach, pilot testing, demonstration scale (the newly opened research center, at one million gallons per day) before moving to full scale (100 million gallons per day by 2030).”

One of the top concerns was treating the water to keep the supply safe and Henifin says the HRSD takes the issue seriously.

“The quality of the water will be carefully and continuously monitored to ensure that it meets human health standards and that the aquifer is protected,’’ according to SWIFT. “The design and selection of treatment processes are being overseen by an independent technical advisory panel of leading experts on the engineering and science of water purification to ensure the best science is being applied.”

Thomas Renner writes frequently for U.S. trade magazines on building, construction, manufacturing and other topics. Contact him at trenner@catalystmc.com. The SWIFT Research Center, a design-build project by Hazen and Sawyer and Crowder Construction, is an advanced treatment facility that incorporates an eight-step process to prepare the water for recharging the Potomac Aquifer. For more information, visit www.hazenandsawyer.com.

MODERN PUMPING TODAY, December 2018
Did you enjoy this article?
Subscribe to the FREE Digital Edition of Modern Pumping Today Magazine!