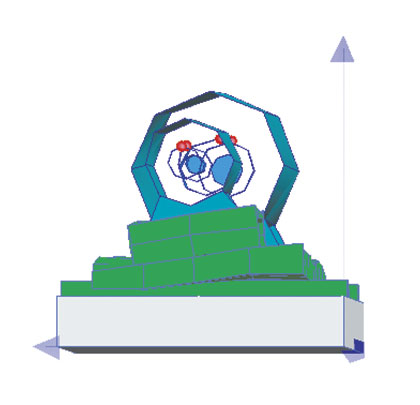 The following article consists of a case study utilizing Operating Deflection Shape (ODS) in conjunction with standard vibration tools to solve problems in the field. This case study consists of a POD structural base issues causing ongoing misalignment even after the motor and gyrol was aligned.
POD SYSTEM ALIGNMENT ISSUE
The POD is a liquid to liquid extractor and consists of a motor coupled to a gyrol, and the POD is driven by a belt via the gyrol. The gyrol is basically a hydraulic VFD allowing operations to adjust speed as needed. The motor and gyrol are mounted in east to west direction on adjustable base plates to align with the POD. The POD is north of the gyrol and is driven by the gyrol via belts. The issue was alignment between the motor and the gyrol. For some time, maintenance aligned the motor to gyrol. After a few minutes of run time the system would generate high 1x and 2x vibration (0.5-0.7 ips) indicating an alignment issue. 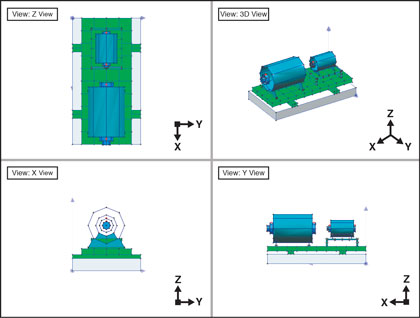 DIAGNOSING THE PROBLEM
Cross channel phase analysis was performed to prove out the misalignment. This issue actually went on for a number of months and the system ran with high vibration. Actually the problem had existed for a number of years. We had a number of outside people come in and help with the alignment; No one could find anything wrong with the alignment or provide any suggestions on what was happening. We performed an Operating Deflection Shape (ODS) analysis to evaluate the system (base, motor, and gyro). We built a model of the motor, gyrol, and base and established points to collect data during operation. The base sits on two adjustable guides allowing for movement in the N-S direction and some movement in the E-W direction. The motor sits on a small platform on top of the main base plate. 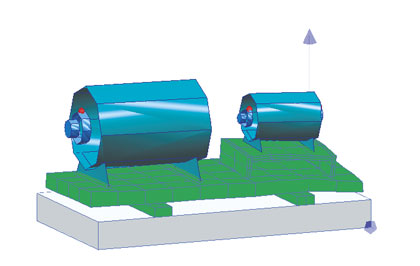 After the model was built and we established the data collection points, we asked operations to startup the POD. With the POD in operation we measured vibration on the system to determine the area with the highest overall amplitude. Once this was determined, we used this as our reference point for performing the ODS. ODS allows us to measure amplitude and phase to see how the system is moving. The following pictures show how the system was moving and also explains why the alignment would not stay. The ODS analysis has allowed us to study the system movement and make modifications to eliminate the problem. 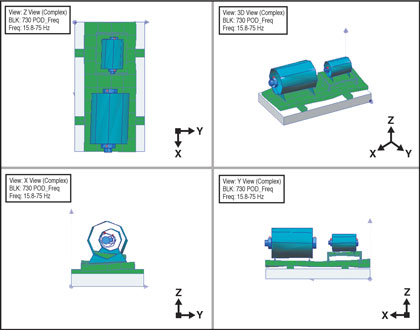 REVIEWING OPTIONS
We looked at a number of options for supporting the base plate and not lose the ability of being able to adjust the base for alignment between the gyrol and POD. We looked at adding three more supports similar to what was already installed in the field, but there were design issues. The final design was to support all four corners and across the middle of the base plates and slot holes in the base plates to allow for alignment.
The supports were installed and the vibration amplitude has dropped down below 0.1 ips, and we are no longer losing alignment. We are planning on putting the modifications on three additional PODs. ◆
REFERENCES