The phrase “significant operational challenges” is something of a major understatement when bringing about wastewater treatment enhancements at a preeminent public international research university, that 170 years on from its establishment, continues to expand.

Known affectionately by alumni, students, and its passionate sports fans as Ole Miss, the University of Mississippi first approached Engineering Solutions Inc. (ESI) in 2010, seeking guidance on an upgrade to its wastewater facility built in 1972 as a a dual basin extended aeration plant.

ESI (based in Pontotoc, Mississippi) designed a project to convert one of the basins to a 0.75 million gallon per day Lakeside oxidation ditch, replacing the existing clarifier equipment and recirculation pumping, as well as upgrading the headworks and converting the other aeration basin to flow equalization.

Lakeside’s oxidation ditch, the Closed Loop Reactor (CLR) Process, consists of reactors with a single feed point for raw wastewater and return sludge. The basic design uses a simple racetrack configuration that provides a straight-line flow pattern for wastewater between the headworks and the final clarifiers. At the core of the CLR Process is the horizontal Magna Rotor, which sustains a high population of micro-organisms in the reactor to provide simple process control. The Magna Rotor provides precise oxygen input into the biological process through adjustment of rotor immersion by raising or lowering the level control weir and by adjusting the rotational speed.

As ESI’s Mike Falkner, civil engineer–principal, explains, the wastewater facility at the University of Mississippi is different in several ways.

“First,” he says, “there are very wide swings in on-campus population, depending on the school calendar. This can range from almost no campus population at all during the Christmas break—to normal student loading—and then to home football games—for which the much-loved Ole Miss Rebels attract sell-out crowds in excess of 60,000 to every home game.”

TRYING TO MAINTAIN A STABLE POPULATION OF BIOMASS

“Also, due to a campus-wide push to convert to low-flow plumbing fixtures, the net wastewater flow rates were not increasing as a linear function of population; however, the concentrations of contaminants (such as ammonia) in the waste stream were continuing to rise—often to levels which are difficult to effectively treat using normal municipal-type treatment processes. This rising trend in ammonia levels was not identified in pre-design sampling prior to the 2010 plant rehab project. The source has been confirmed by on-campus sampling conducted as an independent study.”

As the campus population continued its rapid growth, the Physical Plant Department at the university (PPD) then tasked ESI in 2013 with investigating options for future wastewater treatment. At that time, the university owned and operated a single oxidation ditch separate wastewater treatment facility, permitted for 0.95 million gallons per day, which would be upgraded in the 2015 project to the dual-basin configuration with nutrient removal capability.

Faced with a growth rate that would overwhelm existing wastewater facilities as early as 2017—and experience periods of overload prior to that, the university sought the most feasible approach—from economic, environmental and social perspectives, for the next twenty years.

ESI saw that while the existing system’s water conservation effort had been beneficial in many respects, it had placed higher demands on the wastewater treatment facility, especially when trying to consistently meet the discharge limit for ammonia nitrogen of 2 micrograms per liter.

At this time, the resident population had grown from approximately 7,500 to 8,400—and with the addition of 2,500 employees, the university’s daytime population was almost 20,000.

ESI looked hard at the surface waters potentially affected by the project, including an unnamed tributary of Burney Branch, along with Burney Branch itself, which flows generally southeast into Burney Branch and thence southward to the Yocona River—which had capacity for larger drainage, but was already impacted by the City of Oxford POTW. The city had adequate available capacity to treat the anticipated flows from the university, but it would have been necessary to construct some 12,500 feet of 24 inches gravity sewer to make the connection, including a bore under Mississippi Highway 278.

The potential benefits included lower initial capital cost, elimination of the need for ongoing operational and maintenance expenses, and reduction of environmental liability. Also, it would allow the abandonment of the university wastewater treatment facility, which is located on a prime site adjacent to Vaught-Hemingway Stadium, home to the hugely popular Ole Miss Rebels football team. Not only is this a valuable site, but there are social impacts of treating wastewater, including visual impacts and occasional odor issues, in what has become a high traffic and highly visible area—although there would still be a need for a sewer metering station in the vicinity of the current wastewater treatment facility, so that the entire site could not be converted to other uses.

However, the negative impacts related to this alternative were considered far greater—particularly the City of Oxford’s commercial usage rates for treating wastewater—but the fact that it would leave the University vulnerable to future rate increases. Charges would also apply to maintenance, expansion and replacement of its existing collection system components.

After lengthy consideration, ESI recommended iincreasing the capacity at the university’s existing wastewater treatment facility, maintaining an adequate level of wastewater treatment capacity while maximizing current assets. ESI proposed the introduction of a second Lakeside oxidation ditch, as well as the addition of anoxic tanks upstream of both ditches for enhanced biological nutrient removal (BNR) to help maintain compliance with more stringent National Pollutant Discharge Elimination System (NPDES) discharge limits. The proposed new process train would have to be slightly higher in capacity than the existing ditch, and new headworks would be constructed to optimize the flow balance between the two. Other components would also have to be modified to handle pumping, sludge treatment and chemical treatment.

The most beneficial aspect of this alternative is that the university retains full control of wastewater treatment/disposal activities. Any decisions that would increase operational costs would be made by the university instead of the city, where the university has no vested representation. Also, the annual debt service plus operational cost of this expansion would be substantially lower over the life of the facility than either option involving off-campus treatment. The initial capital cost was higher than the other options and the wastewater treatment facilty would still be located next to the prestigious stadium—but the visual and odor related social impacts would be attenuated by the use of covers and air scrubbers.

Falkner continues, “The most recent project added a third clarifier, new screening and grit removal systems, a headworks odor control scrubbing system, and an aerobic sludge digestor as well as an ultraviolet disinfection system. This included Lakeside’s Grit Removal system, the SpiraGrit, which has no submerged bearings, so is very easy to maintain.”

Compact in design, this system consistently removes inorganic grit from the treatment plant in a mechanically induced vortex environment. The efficiently removes grit over a wide range of daily flow rates. Rotating paddles maintain the flow velocity in the vortex chamber, keeping organics in suspension while allowing heavier grit to settle on the chamber floor. The settled grit moves across the floor and falls into the lower grit hopper.

Lakeside also supplied its Raptor® Micro Strainer, which captures small debris that passes through other screens. The captured screenings are washed, compacted, and dewatered to a dry solids content of 40 percent as they are transported up the inclined screw for disposal. This step reduces the volume by 50 percent and weight by 67 percent, ultimately reducing disposal costs.

“Again, this is a simple yet very effective design with a single drive that keeps maintenance costs low for the university,” says Falkner.

The university’s popularity and growth was underlined in the fall of 2016 when enrolment reached an all-time high of 24,250 students. Overall, enrolment has grown by a massive 40.5 percent over the past decade, and by 13.1 percent in the past five years alone—so putting all of these futureproof measures in place has been crucial.

“The current configuration now has a flow capacity of 1.5 million gallons per day with a peak of 2 million gallons per day. It is designed to be highly energy efficient because the aerators in the ditches are controlled based on dissolved oxygen levels in the mixed liquor using variable frequency drives. This means that they only inject as much oxygen and mixing as necessary to maintain high quality effluent. This is much more energy-efficient that timers or other mixing schemes since it is based on real time operational conditions.”

He concludes, “Investing in Lakeside’s robust engineering was very much part of our commitment to the long-term wellbeing of the University of Mississippi’s wastewater treatment facility. It is tough, reliable equipment, which requires only basic maintenance.”

Warren Kersten is vice president of Lakeside Equipment Corporation. Lakeside Equipment Corporation is an engineering and manufacturing company concentrating on helping to improve the quality of our water resources. Lakeside started in the spring of 1928 to engineer, develop, and provide water purification systems to municipalities and companies throughout North America. For more information, visit www.lakeside-equipment.com. 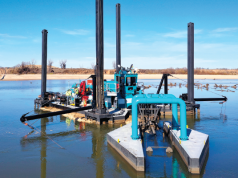