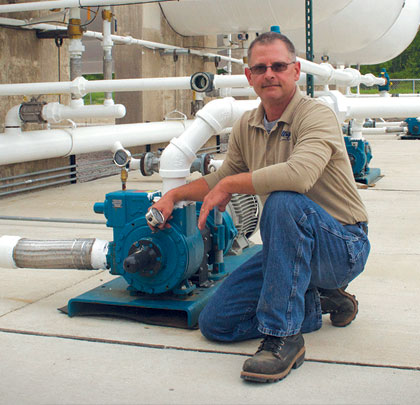 It’s a basic tenet of negotiation: always ask for more than you can possibly hope to receive. Even with that in mind, when Scott Tonkin proposed a 1000 gallon (3785 liter) per minute LPG throughput rate for Altogas, Inc.’s new Red Arrow Transfer Terminal in Benton Harbor, Michigan, even his bosses were forced to do a double-take when considering their operations manager’s seemingly pie-in-the-sky flow-rate goal.

“Scott immediately got the wheels spinning in his head and started talking about 1000 gallons (3785 liters) a minute and we said, ‘No, nobody’s done that and there’s got to be reasons,’” says David Hast, general manager of Altogas. “He also talked to several people we know and have worked with and they said, ‘No, you’re not going to do that, it’s not possible,’ but he’s a hard sell.”

That incredulity was shared by others close to the Altogas operation and its new Red Arrow Transfer Terminal project, most notably Kevin Pruitt, director of integrated systems for Gas Equipment Co., Dallas, Texas, the firm that supplies Altogas with its LPG-handling pumps and equipment.

“I received a phone call from Scott and he threw out a flow rate that scared the heck out of me—he wanted 1000 gallons (3785 liters) per minute,” marvels Pruitt. “My first reaction was, ‘Scott, I don’t want to promise you I can do that and under-deliver.’ He said, ‘Will you work with me to try to get there?’, and I said, ‘Absolutely, I would.’”

“We shopped for a number that a lot of people thought was a bit excessive for the gallons per minute,” admits Tonkin, who is also business development manager for Altogas. “After talking to a lot of transport drivers, the fastest anybody could remember seeing was 850 gallons [3217 liters] per minute, which is a fairly large number when it comes to loading an LPG transport, but why not do something different? That’s why we built it—to see what would happen.”

Observers were amazed when the Red Arrow Transfer Terminal’s LPG-transfer system was put into operation and the flow meters reported a flow rate that exceeded 1000 gallons (3785 liters) per minute.

In the end, that unique 1000 gallons (3785 liters) per minute LPG flow rate was perfect for the state-of-the-art operational capabilities of the Red Arrow Transfer Terminal. Altogas is headquartered in Alto, Michigan, a few miles southeast of Grand Rapids, with satellite offices in the nearby towns of Charlotte and Edmore. From that base of operations it has grown into one of Michigan’s largest locally owned propane companies and since the 1980s, it has provided propane to a residential, commercial and agricultural customer base in central Michigan.

The idea for the Red Arrow Transfer Terminal was born from the fact that the Chicago LPG market has more favorable pricing than Michigan’s does. By locating the terminal in the far southwest corner of the state in Benton Harbor, the facility would be close enough to the Chicago LPG racks so that “jumbo” LPG transports, which are not allowed to operate in the Chicago market, could load up with Chicago LPG for delivery in Michigan.

“While the Chicago market has favorable pricing, it doesn’t allow the larger trucks, so there’s a freight loss when you’re moving the product north,” explains Hast. “Our idea was to have a quick transfer facility where you could get the smaller trucks offloaded and the larger trucks to onload so they could deliver to Michigan companies. Initially, we thought this would be really good for our business, then we thought if it’s really good for us it’s probably good for somebody else, as well, and maybe we can start getting a pass-through percentage of the volume that goes through here.”

Enter Tonkin and his grandiose 1000 gallons (3785 liters) per minute flow-rate plan, which, if realized, would allow the jumbo LPG transports to be loaded in less than 30 minutes.

“The idea was that if we get the trucks in and out fast, we can do more trucks,” says Tonkin. “The owners were all for it and said to do it anyway you want. And that’s what we did here.”

To meet his goal, Tonkin designed a terminal layout that was as flow-friendly as possible. That meant piping with no elbows or 90-degree turns, which would ensure a smooth product flow. It also meant that, when loading, the LPG would flow simultaneously through two hoses and meters, all of which had to be able to support a flow rate of at least 500 gallons (1892 liters) per minute. Tonkin incorporated a 10-inch (254 millimeter) trunk line and collector that pushes the LPG through a 4-inch (101 millimeter) pipe that is equipped with a 4-inch (101 millimeter) flange shutoff and 4-inch (101 millimeter) strainer. The LPG is stored in six 30,000-gallon (1,135,623 liters) aboveground tanks that are situated on piers.

“When we partnered with Gas Equipment Co. we also worked with a meter company to make the gas move as quickly as possible,” says Tonkin. “These meters are the first of their kind in the nation and approved for up to 700 gallons (2649 liters) per minute per meter. Coming off the 10-inch (254 millimeter) trunk line we’re going through our 4-inch (101 millimeter) flange shutoff and 4-inch (101 millimeter) strainer, and then we have 40 inches (1016 millimeters) of clean pipe so that we could maximize flow without any cavitation concerns.”

BLUE WOULDN’T LET ME DOWN

The equipment that would drive this unique LPG-transfer operation would be the pumps. For those, Tonkin turned to Pruitt, who confidently recommended LGL Series Sliding Vane Pumps from Blackmer.

“We looked at all kinds of pump curves out there and settled on Blackmer for this application,” says Pruitt. “Blackmer’s always been there, always been reliable. They provide a very low cost of ownership. We put Blackmer pumps in and don’t hear from the users for ten years, and then they just might buy parts for the pump. They’ve just always been so reliable.”

“When I was talking with Gas Equipment Co. and other suppliers, they told me Blue wouldn’t let me down, so that’s why we decided to go this route,” confirms Tonkin.

For the Red Arrow application, Tonkin required four 4-inch (101 millimeter) LGL Series pumps. They were the perfect choice because they have been designed for maximum performance and reliability under the most demanding and severe service conditions. They feature a cavitation-suppression liner that reduces noise, vibration and wear, as well as replaceable casing liners and discs that allow for easy rebuilding of the pumping chamber to like-new condition. All models are able to be base- or truck-mounted and are equipped with an internal relief valve. They can be powered by PTO drive, hydraulic motor or electric motor, depending on the installation location and application.

“We use the Blackmer 4-inch [101 millimeter] pumps with a 25-horsepower electric motor and gear-drive reducers and we also ganged two pumps together so that we can utilize the best of their operation as the LPG comes to the 10-inch [254 millimeter] collector I designed,” says Tonkin. “Each pump has a bypass that we tie together with a 2-inch [50 millimeter] tee that returns back to the trunk line. We’ve got 4-inch [101 millimeter] inlets and 3-inch [76 millimeter] outlets on the pumps so we could get the flow we’re after. That maximizes the flow and lessens the idea that any cavitation would be created with the restriction, and then everything delivers out of both of our meter systems.”

While Tonkin’s 1000 gallons (3785 liters) per minute goal was eye-opening and the design looked good on paper, the real test would come when the system was fired up for the first time and the LPG began to flow. If jaws dropped when Tonkin made his 1000 gallons (3785 liters) per minute proposal, the project’s principals were positively stunned when the first load of LPG flowed through the system.

“I recall when we first fired the plant up we all had our phones out videoing it because we couldn’t believe the flow rates we were seeing,” says Pruitt. “We actually put sight glasses in the line so that we made sure we had laminar flow and the flow was crystal clear, a real smooth flow. I remember videoing one line and counting off that one line at 545 gallons [2063 liters] per minute, so between the two of them we were around 1080 gallons [4088 liters] per minute. It was quite an adventure, I must say. I have to give credit to Altogas for doing every little thing right; it all adds up in the end. They didn’t cut any corners, spared no expense and did the project pretty much better than anything I have ever seen.”

“I’ve always liked to do things that sometimes other people haven’t tried yet,” says Bernie Vanderboegh, president of Altogas. “I didn’t think we could 1000 gallons [3785 liters] per minute either, so I remember when they first cranked it up the surprise from everyone, the adjectives when those meters were reading 1000 gallons [3785 liters] per minute; that was quite a pleasant experience.”

The Red Arrow Transport Terminal only became operational in March of this year, but already its storage capacity has been expanded from the original 120,000 gallons (454,249 liters) of LPG to 180,000 gallons (681,374 liters), which will help the facility meet the growing demand. In fact, Tonkin hopes that by the time Red Arrow celebrates its first birthday next March, as many as 15 million gallons of LPG may have passed through the facility.

“The situation now is that we can’t keep the tanks full,” says Hast. “The key is getting the product to the site, so we’re also going to be adding another offloading facility so we can get more trucks in. We’ve tried to set a parameter of how many gallons in and out we can do, what’s crazy and what’s too minimal; somewhere in the middle is what we’re going to shoot for, and I think we can accommodate it.”

While “crazy” has been a constant in the creation of the Red Arrow Transport Terminal (Really, a 1000 gallons [3785 liters] per minute LPG flow rate?!?) one of the sanest decisions that was made in the course of the site’s development was the commitment to use Blackmer LGL Series Sliding Vane Pumps to facilitate the LPG transfer, and it’s a decision that no one involved in the project has had cause to question.

“With my experience with Blackmer compared to other pumps, the reliability and long-lasting consistent operation will keep the gas flowing and moving with minimum maintenance involved, which makes it easier for everybody,” says Tonkin. “They’re machined much better, everything is much more consistent when it comes to the inner workings, and the tolerances are excellent. Also, the fact that they’re a Michigan company means the service is right there, the parts are there, anything that’s needed is right at our backdoor so we know that everything will continue to run smoothly.”

Brent Tippen is a public and government affairs professional for Chevron Products Company, a division of an indirect, wholly owned subsidiary of the Chevron Corporation (CVX) headquartered in San Ramon, California. He can be reached at 925.790.3938 or brent.tippen@chevron.com. For more information on the Cetus® family of compressor oils, download the product data sheets from www.chevronlubricants.com.

MODERN PUMPING TODAY,  December 2013
Did you enjoy this article?
Subscribe to the FREE Digital Edition of Modern Pumping Today Magazine!