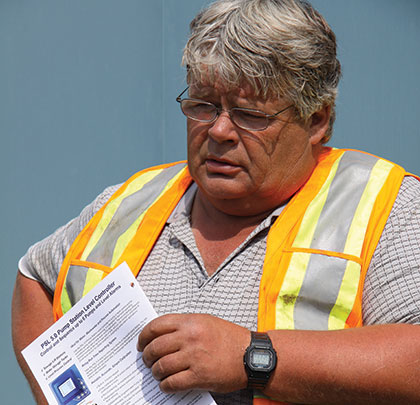 It’s 2:00 AM and a telephone rings in Eckville, Alberta. Rick McKinnon checks the display on his cell phone and groans. It’s another high level call out alarm from one of the town’s new sewage lift stations. He knows before he drives there that the system will be running on floats instead of the new ultrasonic level controller. Greyline PSL 5.0 Pump Station Level Controller.
Rick is the public works supervisor for the town of Eckville. He has to work out most of the issues that occur in the town’s wastewater collection system and the level control call outs in two new sewage lift stations were costly and straining his resources. “There have been lots of problems and I am getting annoyed at the call outs,” says Rick. East sewage lift station with grease and foam.
THE ECKVILLE UPGRADE
Serving a population of 1100, the town of Eckville completed its upgrade project with two new lift stations and forcemains in 2011. Stantec Engineering of Red Deer, Alberta, designed the new pump stations. Each control system included a non-contacting ultrasonic level controller with Hi/Lo floats as back-up. Eckville had used ultrasonics with float backup in their old lift stations so Jeffpro Services of Calgary, Alberta, supplied new but similar level instrumentation for the project. The pumps are VFD (variable frequency drive) operated with relay connections to the level controllers for On/Off pump control and 4-20mA speed control.
Soon after start-up Eckville operators began receiving call out alarms from the control systems in both pump stations. The cause of the echo loss problem was hard to figure out because it was intermittent. The ultrasonic level controls would work perfectly for several weeks but then the call out alarms would begin again and they could come at any time in the day or night, so troubleshooting was a trial and error procedure. They first suspected that condensate might be forming on the ultrasonic sensors and causing echo loss. Over several months operators experimented with the instrument settings, sensor positioning and then with baffles and stilling wells to reduce the build-up of foam and grease on the water surface. Improvements were made but none of the modifications entirely stopped the call outs. Left: Non-contacting ultrasonic level sensor.
Right: Submerged redundant pressure.
RECOGNIZING THE PROBLEM
This problem was not new to Greyline Instruments. Manufacturing ultrasonic level controllers since 1986, Greyline had seen similar echo loss conditions in sewage lift stations before. Design engineers set out to solve the problem and came up the unique concept of a level instrument that operates with an ultrasonic as the primary sensor and any other 4-20mA level transmitter as a redundant or standby sensor. The new model PSL 5.0 Pump Station Level Controller was released at the same time Eckville was experiencing call out alarms.
Rick McKinnon contacted Carbon Controls of Calgary, Alberta, to help solve the level control problems. Carbon Controls supplied two of the new Greyline PSL 5.0 Pump Station Level Controllers plus submersible pressure sensors to be connected to the PSL 5.0 Controllers as a hybrid system. They felt that using ultrasonic along with pressure sensors would result in a reliable level control system that would not be defeated by foam or grease on the water surface. Relay and redundant sensor run report.
HOW IT WORKS
Pump station level monitoring is a critical process with catastrophic failure modes. In a standard sewage collection system, sewage flows to local wet wells or sumps by gravity and is then pumped to a sewage treatment facility. Water level in the wet well is monitored and pumps activated whenever the level exceeds set points. Failure in the monitoring instrument would allow the sewage level to rise and spill into the environment and or back up into homes. High level alarm switches are typically installed as a back-up.
ANALYZING THE OPTIONS
Several methods exist to monitor liquid level and each has different drawbacks. Airborne ultrasonic sonar has become the standard level monitoring technology with the benefits of easy transducer installation and maintenance (mounted above and remote from the sewage) and modern manufacturing methods produce a highly reliable device.
Air sonar uses sound pulses bounced off the liquid surface to compute the sewage level. Grease or foam blanketing the surface is one of the few situations which can defeat this level monitoring method. Having an alternate monitoring method which is not defeated by grease cakes or foam would allow a “second opinion” in the case of a temporary loss of sonar signal and not trip the high level alarms.
An added bonus is that the embedded sonar calibration is used to automatically calibrate the alternate level signal and the two level signals are continuously compared to alarm the operator if the alternate signal is not responding to level changes.
The transition from primary to secondary level signal is seamless and transfer to the secondary signal is displayed to the operator with usage hours logged for troubleshooting or maintenance purposes.
The Greyline PSL 5.0 uses a “hybrid” of transducer technologies to provide a redundant level measurement and insurance against level measurement failure. The 4-20mA secondary input, automatic calibration and signal monitoring together with easy field retrofit are designed to solve a specific problem in the sewage treatment industry.