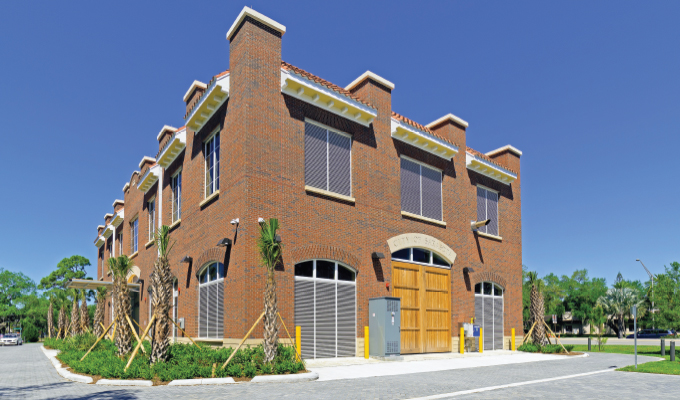 A BIG LIFT FOR FLORIDA COMMUNITY

What: Lift Station 87 in Sarasota, Florida, is a new above-ground station with a 9.5 million gallon per-day capacity.

Why: The project is necessary to improve the wastewater system and mitigate overflows due to aging infrastructure and equipment. It will replace Lift Station 7, which will be decommissioned and the site will be restored and landscaped to its park-like setting. The new station will handle about 33 percent of the city’s wastewater flow.

Hurricane-proof: The two-story building was designed to withstand the impact of a Category 3 hurricane. The design will allow Sarasota Memorial Hospital and other critical designated storm shelters to remain operational after a storm. City officials directed the project engineer, McKim & Creed, to bring critical equipment above ground to a height above Category 3 storm surge elevation.

Custom floor doors: Thirteen floor doors from BILCO were installed in the project, and include factory-installed fall protection grating. The doors were customized to meet unique size requirements.

Did you know? Sarasota has been impacted, directly or indirectly, thirty-six times in the last 146 years by hurricanes. The city is brushed or hit by hurricanes every 2.16 years.

People have discovered there is a lot to like in Sarasota, Florida. Fewer than 1,000 people called the city home in the early 1900s. Its population now approaches 60,000, with an increase of more than 12 percent since 2010. Like the rest of the county with the same name, the city on the state’s western side has seen a significant rise in citizenship.

The motives are many: weather, culture, recreational activities, and affordable housing are among the reasons people have flocked to the community. Sarasota Bay’s abundant marine life, plentiful variety of plants and exotic birds add to the appeal, along with opportunities for fishing, kayaking, and water sports activities. Sarasota County attracts more than 2.2 million annual visitors, accounting for $2.24 billion in total economic impact. By any measure, Sarasota has got the goods.

Sewage spills can detract from the appeal of any community, and they seem particularly problematic in Sarasota. “The overall health of the bay has regressed in many ways over the past decade,’’ Orion Morton, a kayak tour guide and advocate for Sarasota Bay wrote in the Herald-Tribune newspaper in April. “We have become accustomed to sewage leaks.”

A 500,000-gallon sewage link in February 2004 in the city provided the impetus for a new lift station to handle approximately one-third of the city’s wastewater flow. Lift Station 87, which opened late in 2020, will replace Lift Station 7, an aging facility that contributed to city’s sewage control problems. After the spill in 2004, another 500,000-gallon spill just seven months later sparked community outrage.

The problems, it turns out, were just beginning. The road to completing the new lift station—at a reported final cost of $67 million—was complicated, lengthy, and costly.

Neighbors complained to the city’s public works department about foul odors emanating from Lift Station 7 almost from the beginning after it was constructed in the 1980s. Other city officials, however, had been unaware of resident complaints.

Tensions reached a boiling point in February 2005. Residents learned about the 2004 spill only after the incident one year later. Michael McNees, Sarasota’s city manager at the time, defended city employees, further angering residents. In August 2005, six public works employees were demoted, reprimanded, or forced to retire. McNees left his position as the city’s chief executive in 2007.

The state’s Department of Environmental Protection established a 2011 deadline to move the city’s Lift Station from Pomelo Avenue. Luke Wood Park was determined to be the best site in terms of efficiency and cost. The city estimated the project would cost $8.5 million.

The city awarded Westra Construction Corporation a $9.6 million contract in February 2011. AECOM served as the initial project engineer, and teams estimated to have the station completed in 2012. Construction began in June 2011, but more problems quickly surfaced.

Just two months after work began, another spill—this one not caused by aging Lift Station 7—pushed the project in a new direction. A contractor inadvertently broke a force main, causing an estimated spill of 200 gallons into the Hudson Bayou, a Sarasota Bay tributary. AECOM and Westra were terminated, stopping work on the project. An article in the Sarasota News Leader magazine said contractors were on the verge of drilling into a support slab of the Osprey Avenue bridge. “We’re very lucky we didn’t have a catastrophe with our utility department,’’ then-Mayor Shannon Snyder says.

McKim & Creed took over as the project engineer in 2013 and after an evaluation phase, made two significant changes to the project. The new team wanted to build a new, above-ground “hurricane-proof” lift station, designed to withstand Category 3 hurricanes.

The new model also required digging eight-feet further down to construct microtunnels to convey waste. Engineers believed the bridge might have collapsed in the soft silt base around the bridge without the deeper microtunnels.

While necessary, the new design was more time-consuming and costly. Previous work also needed to be done over. Work on microtunnels started in January 2017, and estimates increased from $27.1 million in 2014 to $32 million in 2015 and finally, $54.1 million in 2017.

Microtunneling was one of the most significant decisions made by McKim & Creed for the project. A trenchless method of sewer construction, the process is effective in soft, unstable soils. The tunneling process is remotely controlled and involves digging a sending and receiving pit, placing a microtunnel boring machine into the sending pit, cutting a hole through the ground and pushing the new sewer pipe in place. Workers then have to remove the microtunnel boring machine.

A jacking rig, functioning similar to a jack hammer, pushes the new sewer pipe in place. The process is slow, progressing about 20-40 feet per day. “You’re underground, chewing through rock, under a historic bridge, and in an environmentally sensitive area,’’ McKim & Creed’s Robert Garland, P.E., said in a radio interview. “We went about this in a methodical way.”

While slow, the advantage is that the process does not disturb the surface above. The bridge, and the sensitive environment in Hudson Bay, concerned Sarasota officials and McKim & Creed. Wastewater is carried through a 36-inch PVC pipe in the microtunnel, and it is encased in a 60-inch casing.

“We put the steel casing in first, which is the wall of the tunnel,’’ Garland said. “Inside that casing will be the pipe that carries the wastewater. It helps us in the construction, but if there is any failure of the pipe, it is contained within that casing.”

The other critical change designed by McKim & Creed included the construction of a two-story lift station designed to withstand strong hurricanes. Sarasota Memorial Hospital and storm shelters will be served by the new station. Maintaining operations during hurricanes was an important concern for city officials and residents as a hurricane or tropical storm brushes the city, on average, every other year.

The building includes HVAC and equipment exhausts in the towers, and the two-story building was built over a new, 50-foot deep wet well. It has a maximum capacity of 9.5 million gallons per day.

PCL Construction installed thirteen doors from BILCO in the lift station. The doors were manufactured in a wide range of sizes and allow access to vaults, pipes, and pumps in the wet well. The floor doors are constructed from aluminum with stainless steel hardware for corrosion resistance and are reinforced for H-20 loading to withstand the force of heavy equipment vehicles used at the facility.

“The doors are durable, and they are a good product for this application because they are aluminum and won’t be as impacted by corrosive gases and water,’’ says Cory Westphal, an assistant project manager for PCL. “It was a fairly standard installation except that they were installed before the building was finished. The building was built around the doors.”

PCL ordered the doors through Building Specialties of Bradenton, which worked with them to manufacture special sizes. “BILCO was selected because they had the capability to make very large hatches,’’ Westphal says. “Competitors had difficulty building the sizes we needed and meeting the loading requirements. The ability to make them that large and meet those requirements was essential. They were prepared because they build doors like this frequently and they knew how to do it.”

The final phase included the installation of a 24-inch diameter gravity wastewater pipeline by open cut to connect homes and businesses to the new lines. Crews also replaced aging ductile iron and asbestos cement pipe, installed new reclaimed water mains and replaced storm sewers. New curbs, sidewalks, and drainage improvements were included. Osprey Avenue, which had been closed earlier in the process for the digging of the microtunnels, was closed again from June 2020 through March 2021.

Wastewater flow was diverted to Lift Station 87, and Lift Station 7, seventeen years after its failing systems surfaced, will eventually be demolished and restored to a park-like setting. The final price will amount to about $67 million, and that figure includes $48.6 million for planning and construction, according to reports.

For city officials and residents, the project’s completion is noteworthy, but hardly celebratory. “I think we need to own up to it and explain to the community what happened so that we and future commissioners don’t have the same problem or learn from those mistakes,’’ Commissioner Hagen Brody told the Herald-Tribune last September.

Thomas Renner writes on building, construction, engineering, and other trade industry topics for publications throughout the United States.