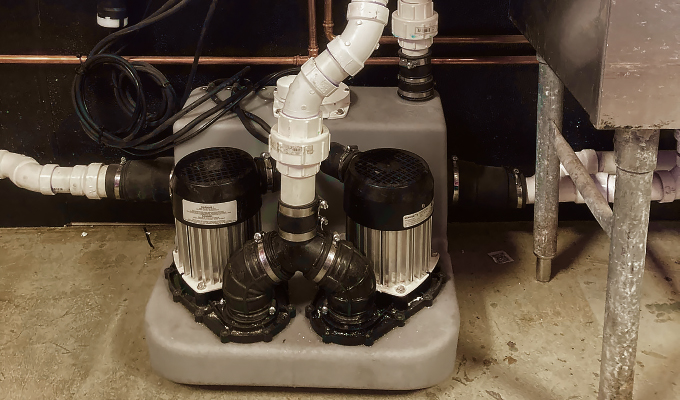 Revival Brewery Company provides a distinctive craft beer experience that appeals to everyone. It is a renewal of brewmaster Sean Larkin’s passion for unique and innovative craft beers, cultivated over twenty years of creating signature brews for the preeminent breweries in Rhode Island.

Though he’d been thinking about striking out on his own for a few years, it was an introduction to avid home brewer Owen Johnson in late 2009 that set in motion what would become Revival. After many nights of brainstorming, Revival Brewery Company decided to reinvent itself in a post-pandemic world with the timeless combination of beer and pizza. The owners created Revival Brewing and Lost Valley Pizza, a brewpub and pizzeria located in the Valley neighborhood of Providence, Rhode Island.

After reopening the brewpub in a new building, the owners had various projects lined up to improve the space, including additional bathrooms and a new bar area.

However, the brewery’s new location posed a difficult plumbing situation. According to Geoff O’Leary, owner of O’Leary Plumbing and Heating, they had originally planned to install traditional underground drain lines, but “during the initial construction of the brewery, they utilized a space without any plumbing plans available, so we had no idea what the plumbing setup looked like,” explains O’Leary.

“We knew there were drain lines in the floor, but we didn’t know where we wanted to install the restrooms or the bar area,” he continues. “We later realized the concrete was three feet thick, making any new plumbing installation particularly difficult and expensive.”

Thankfully, O’Leary knew of a product he had been using over the entire span of his twenty-year plumbing career: Saniflo’s above-floor plumbing pumps, a solution that would allow them to install plumbing without needing to break through that 3-inch-thick concrete to install new drain lines.

“I’ve been using Saniflo’s residential line of macerator pumps since it was first introduced in the United States,” says O’Leary, who serves the Eastern, North, and South Shores in Massachusetts providing residential and commercial plumbing services.

After presenting the challenges they were facing at the brewery to manufacturers representative Walter F. Morris, they introduced him to Saniflo’s commercial line of drain pumps and lift stations. A Morris representative recommended Saniflo’s Sanicom 2 to handle the drainage for a new bar area. Walter F. Morris also recommended Saniflo’s Sanicubic 2 to handle two unisex restrooms. Down the line, the brewery faced additional issues when they had to add a sink close to the pizza oven per the Health Board’s request and, again, when they finally started the construction of the new bar area.

“The Sanicubic set the standard for the brewery and helped out tremendously, because we could go from one staff bathroom to providing two bathrooms for the public,” O’Leary explains.

After successfully opening and providing the necessary amenities to customers, the brewery had to add a hand sink near the pizza oven. O’Leary explains there were no drain pipes available close enough to the oven, so they had to find another Saniflo solution. O’Leary decided to install the Saniswift drain pump, which enabled them to tie into the existing drain line, located above the doorway almost 30 feet away from the new hand sink.

Soon after, Revival Brewing and Lost Valley Pizza was ready to start the construction of the new bar area. The bar would include two washing machines, a three-base sink, and ice bins. The new Sanicom 2 served as the plumbing solution for the bar area. The Sanicom 2 is a heavy-duty duplex drain pump designed for applications requiring gray water removal for commercial needs.

Recently introduced into the market, the Sanicom 2 comes equipped with a pair of 2-horsepower, 220-volt motors for handling multiple commercial fixtures that must process large volumes of high-temperature water, grease or chemicals. The duplex drain pump can move up to 140 gallons of fluid per minute, with both pumps automatically activating simultaneously when the incoming flow rate exceeds that of a single pump.

Other key features of the Sanicom 2 include:

Like the Sanicom 1 drain pump, the new duplex model can handle fluids up to 194 degrees Fahrenheit (90 degrees Celsius), making it ideal for industrial-scale dishwashers, commercial washing machines, hydroponic crop growing, and any other commercial and industrial applications requiring wastewater evacuation. With horsepower ratings higher than other Saniflo systems, the Sanicom 2 discharges effluent through a 1.5-inch pipe vertically 32 feet and/or horizontally 390 feet. The pump comes equipped with built-in check valves on the discharge of each motor.

Accommodating the brewery’s new bar, the Sanicom 2 pumps the wastewater from three fixtures 15-feet vertically and then 30-plus-feet horizontally via a 1.5-inch discharge pipe. At a quarter-inch slope per foot, the discharge then runs into the main drain on the other side of the wall.

“Depending upon the length of your run into a drain line, it could take as little as an hour to install the Sanicom 2,” says O’Leary approvingly. “But it was a twelve-hour job for us at the brewery, because we had a lot of piping to run and had to install venting.”

According to O’Leary, the installation was very easy and went smoothly for him and his team. “We effortlessly connected the drain lines to the pump and installed a shut-off for the ejection side for maintenance down the line,” he says, adding, “I was amazed how high and far the Sanicom 2 is able to pump the drain water to the sewer line, yet the unit itself tucks right under the bar.”

Besides not obstructing the bartenders or the staff, the Sanicom 2 offers easily accessible electrical hookups, according to O’Leary: “The electrician raved about how simple and easy it was to make connections.”

O’Leary reports that “the bar is now up and running, and the owner’s feedback has been unbelievably positive”—thanks in no small part to Saniflo’s heavy-duty commercial drain pumps and lifting station.

Revival Brewing Company is a centered on the brewmaster’s passion for unique and innovative craft beers, cultivated over twenty years of creating signature brews for the preeminent breweries in Rhode Island.

Saniflo is the world leader in the plumbing industry as a result of the above-floor technology used in Saniflo pumps. The Saniflo’s complete range of pumps, for both residential and commercial needs. The innovative method of using above-floor technology allows the installation of any sanitary application, anywhere. Whether it’s a small project requiring drain and condensate pumps to more complex engineered jobs, such as a whole buildings with multiple fixture units, Saniflo has a solution. For more information, visit www.saniflo.com.