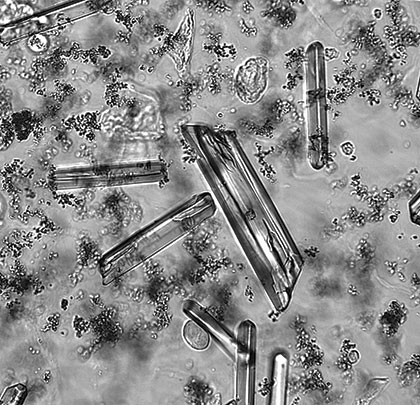 Named after Henrich Christian Gottfried Von Struve, who discovered the magnesium ammonium phosphate crystals in medieval sewer systems in Hamburg in 1845, struvite is a major problem for wastewater treatment plants. The hard, crystalline deposit forms scale on lines and belts, in centrifuges and pumps. It also clogs system pipes and other equipment including anaerobic digesters.

Struvite precipitation can be separated into two stages of nucleation and growth. Nucleation occurs when constituent ions combine to form crystal embryos. This crystal growth continues as long as there is an excess of the crystal-building components in the medium—and this is typical for wastewater systems. As struvite components are steadily replenished, crystal growth is an ongoing problem. The formation of Struvite occurs under favorable conditions, including when concentrations of ions from Mg2+, ammonium NH4+ and phosphate (PO4)3 exceed levels which promote the formation of crystals, sometimes referred as super-saturation. 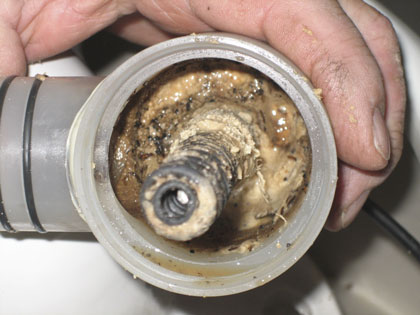 Struvite crystal components are typical ingredients of human waste. Our drinking water contains small amounts of magnesium. Urea or carbamide from human waste breaks down into ammonia and carbon dioxide (CO2) in the anaerobic digester. Phosphorus comes into the plant as a phosphate from our dishwasher and laundry detergents.

The mineral components are found in all sewage slurries containing water. Dewatering enhances the concentration of the ions in the remaining water until the point of precipitation (supersaturation) is reached whereupon Struvite forms rapidly. With struvite, the plant’s operational efficiency begins to reduce and ultimately will be severely compromised. Struvite scale and crystal rock buildup in pipes, valves and pumps will slow the flow of material. Struvite scale on heat exchangers will make it more difficult to maintain temperature in the digester.

Control of struvite formation can be obtained by minimizing the concentration levels of any of the three main soluble ions. Often this involves dosing with metal salts to reduce the phosphorous concentration in wastewater or alternatively using chemical phosphorous which can increase sludge volumes and create greater concentrations of metals in the sludge produced.

However, recent changes in legislation regarding chemicals usage together with increasing costs of chemicals and manpower has led to wastewater companies looking for other means of removing and preventing Struvite by utilizing more environmental methods. Struvite prevention is a hot topic for discussion groups and seminars where the participants are plant managers and operators of wastewater treatment plants. 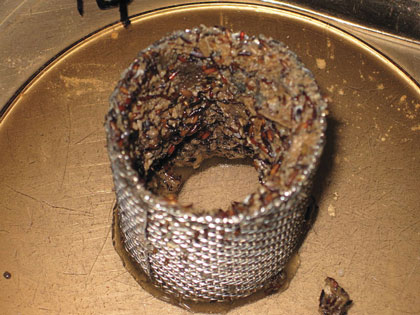 The best method for preventing the precipitation of Struvite is to have a program that limits the availability of the base components of struvite to react with each other. One method that is becoming increasing popular with plant managers is electronic descaling which has proved particularly successful in removing and then preventing the recurrence of struvite in wastewater plants.

Aqueous solutions can become supersaturated, which means that they contain higher concentrations of dissolved solute than their equilibrium concentration. Such solutions are not stable and are easily triggered into dropping back to saturation level, forcing the dissolved compound to precipitate. Even when a bulk solution is less than fully saturated, scale formation can occur spontaneously due to localized super saturation, at a surface for example. 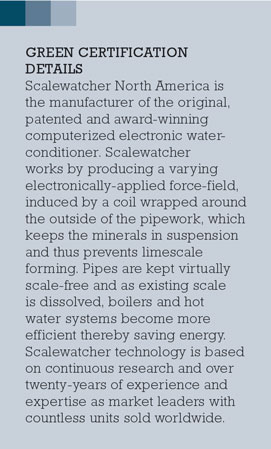 Gases in general, and specifically carbon dioxide, are less soluble in water at high temperatures. There is an equilibrium between CO2 (the gas) and H2CO3 (carbonic acid) in water, which depends very much on temperature. With rising temperature, H2CO3 decomposes and—with Ca-ions in the solution—CaCO3 crystals are formed from the solution. As less carbonic acid is there, the pH increases (i.e. from 7.5 to 8).

Carbon dioxide and gases in general are more soluble under higher pressure. Therefore, as the pressure drops, carbon dioxide gas will be forced out of solution, lowering the carbonic acid concentration. The rise in pH is associated with a drop-in calcium carbonate solubility, leading to the formation of mineral scale deposits. 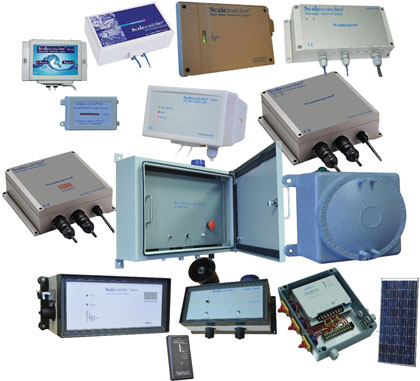 Electronic water conditioning/treatment (EWT) is a non-invasive system utilizing single or multiple solenoid coils wrapped around the pipework to be treated. A continuously frequency changing signal generator, within a specified range, supplies current to the coils. The pulse shaped current creates an induced electric field, concentric around the axis inside the pipe. As a consequence to this arrangement, any charged particle or ion moving within the field experiences a so-called Lorentz force generated by the interaction between charged particles and magnetic and electric fields.

The treatment influences the initial nucleation, resulting in crystals that do not “stick” together. Untreated water builds up matted structures that continuously grow. This treatment creates idiomorphic, scattered crystals, which do not form matted structures. They have a rotundas shape, which means that they have a larger volume in relation to a smaller surface. This feature makes them sensitive to water currents and they are easily flushed out of the pipeline. As no new scale layers are formed, the sheer force of the water flow will gradually remove existing layers of scale. The ability to adjust power, frequency and coil configurations of products like the Scalewatcher on site enables performance to be optimized with no downtime and no pipe replacement.

Struvite formed inside the sludge dewatering centrifuge necessitating the need for the centrifuge to be stopped and cleaned every 800 hours of operation (approximately two months) which took workmen a day to clear with chemicals, hammers and chisels.

A Scalewatcher elctronic descaling system was installed at the centrifuge with an induction cable around the 6-inch supply mains. When, after four months, the treated centrifuge was opened during the first inspection, it appeared that the wall was only covered with a minimal deposit of softened struvite. Two months later the centrifuge was opened and inspected again whereupon it was found to be even cleaner. To confirm the results, the Scalewatcher was switched off. Shortly afterwards, the operators noticed that the deposits had returned. When the Scalewatcher was switched on again the Struvite disappeared.