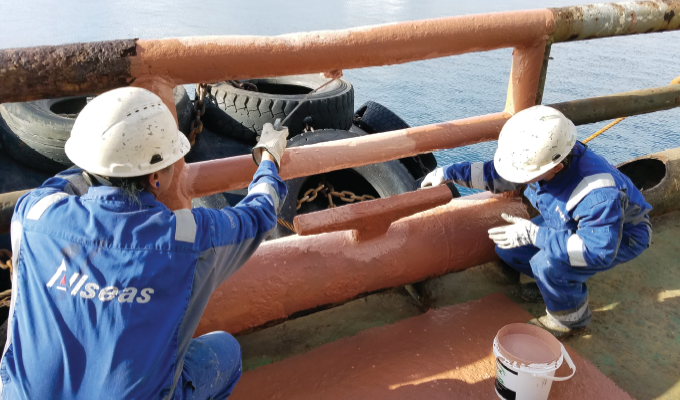 For the marine shipping industry, preventing corrosion is a critically important operational and safety issue for fleets, whether tanker, container, dry bulk, general cargo, passenger, or roll-on roll-off vessel. The continual exposure to seawater and salty air is a corrosive combination that can shorten the service life of everything made of steel such as hulls, decks, cargo, and ballast tanks. In addition, corrosive cargoes, as well as cargo and equipment damage can accelerate corrosion, while increasing maintenance cost and safety risk. Because the corrosion of steel is such a concern in a marine environment, it is common for a full re-priming and re-painting to occur during dry docking every five years or so, with touch up occurring on a continual basis.

Marine primers represent a critical foundation for paints and coatings in harsh maritime environments. However, they have historically been unable to effectively deal with the eventual formation and recurrence of rust. Traditional primers only encapsulate rust until the paint/primer is scratched, chipped, or breached and moisture and oxygen migrate under the film, allowing the corrosion to spread.

As a result, maintenance personnel or coating applicators must repeatedly utilize costly, time-consuming, and environmentally hazardous surface preparation methods such as sandblasting to prepare surfaces for priming and repainting. However, not all environments can withstand sandblasting, which can damage critical surfaces and be impractical for reaching hard-to-access areas such as cracks and crevices.

Now, however, more advanced primers have been formulated that set a higher performance bar in corrosive environments. These reactive primers go beyond encapsulating rust to instead convert it to a protective material (iron phosphate) to minimize the risk of further corrosion. The chemical bond provides superior adhesion and corrosion protection, while eliminating under-film corrosion.

The rust conversion formulation also differs from prior technologies by using a non-toxic, ultra-low VOC water-based acrylic polymer solution that can be applied with minimal surface preparation and without the need to sandblast steel substrates.

One of the main reasons that maritime vessels are so susceptible to corrosion is that traditional primers have serious deficiencies in this area. A common failure of primers is not sufficiently protecting against under-film corrosion.

A primer must first form an effective chemical bond to the metal substrate. Without this, rust promoters like salty sea spray, oxygen, and humidity will creep underneath the primer causing further corrosion. Most primers only encapsulate the iron oxide, which is not 100 percent effective in preventing further corrosion.

Another reason that so much marine shipping industry infrastructure is prone to rust when utilizing typical primers is that a high level of surface preparation is required because most corrosion primers are sensitive to chlorides.

Even a minute amount of chloride on the steel can cause coating system failure. This is why leading coating manufacturers demand extreme levels of surface cleaning (sandblasting) and chloride removal to a level of 5 micrograms per square meter, which is nearly impossible to achieve. Even when sandblasting is used for surface preparation, flash rusting will occur.

In response, the search for more enduring corrosion protection for maritime vessels and infrastructure has involved the development of long-lasting primers that correct traditional deficiencies.

NanoRustX (NRX) NanoPrime, for example, works by chemically reacting with iron and iron oxide (rust) to form iron phosphate and creates a Nano bond with both metallic and painted surfaces. The chemically bonded layer is insoluble and extremely corrosion resistant. This “bonding” process also provides superior adhesion and flexibility and stops under-film corrosion that occurs when conventional coatings are damaged.

The non-toxic, ultra-low VOC primer contains nano-polymers for added strength and durability and has been tested to successfully coat surfaces from rust-free to up to 700 microns of rust. The elasticity of the advanced primer makes it very durable in temperature variations from -90 to 400 degrees Fahrenheit (-67 to 200 degrees Celsius).

Because the advanced primer actually chemically reacts with galvanized steel surface, no surface preparation is required other than a water wash. The water-based acrylic polymer is not sensitive to chlorides or rust and can actually neutralize them. Unlike initial generations of rust converting primers, the primer performs equally well on clean, partially corroded, and heavily rusted surfaces. Typically, a power wash (240 bar/3500 psi) is all that is needed before applying to steel (clean or corroded), galvanized steel or aluminum in order to remove loose paint, dirt, and grease. The primer can be applied to a corroded surface by hand brush, roller, or airless spray gun on the substrate. After the application of the primer, a single coat of a low VOC top coat will complete the job.

The primer has successfully been used on a wide variety of shipping vessel applications to quickly and cost effectively deter corrosion without extensive surface preparation.

In Baltimore, Maryland, when a major roll-on roll-off carrier providing end-to-end, international transport of heavy vehicles and equipment was experiencing rusting and pitting on the upper deck of a vessel due to offshore conditions, the vessel engineer sought new coating methods that could be easily applied for maintenance, even during operation.

Due to its properties, NRX NanoPrime was selected. An electric deck scaler was used to remove existing paint and rust, followed by an electric wire brush machine and a 3,200-psi water blast. Heavily rusted and pitted areas were spot primed, and two coatings of primer were applied. The crew then applied a JOTUN Pioner top coat. The combined system has provided protection against offshore conditions, and is still effectively protecting the deck after two years, according to the roll-on roll-off carrier. It is now used as a simple, effective maintenance solution while the vessel is underway.

In a different application, a marine towing vessel in Staten Island, New York, used for petroleum transport was undergoing maintenance in port when the vessel captain sought a more durable corrosion coating that could withstand working damage. The starboard side of vessel had rusted gashes and holes from damage that had not been recoated, and the sea spray in the vessel’s work environment had accelerated corrosion.

Again, the emphasis was on providing an effective corrosion coating easily applied without interrupting a busy operating schedule. The solution, it turns out, was to use a 5,000 PSI high pressure water blast to remove loose paint, rust and any other contaminants; then to spot prime heavily rusted areas, followed by applying two coats of the advanced primer. The crew then applied a black International Interthane 990 topcoat.

The combined system has provided protection against offshore conditions, while preventing under-film corrosion in case of any further working damage that breaches the coating. After two years, the towing vessel captain has reported that the coating is a significant improvement over previous methods.

While the marine shipping industry has long battled corrosion, the use of advanced primers that convert rust into a protective layer, applied by any method, promises to help keep vessels in good working order far longer, with less costly maintenance, than traditional methods.