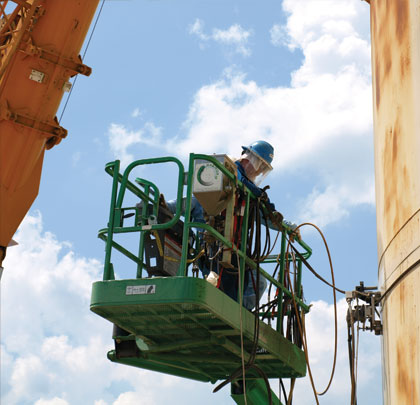 The conventional method for dismantling or repairing petroleum storage tanks is to cut them apart with oxyacetylene torches and hand-held gouges. Sound a little hazardous and time consuming? Mass Technology Corporation thought so too. Convinced that there had to be a better way, Mass Technology launched its Safe-Cut service and acquired the rights to a cold-cutting process for the refinery industry using ultra-high pressure waterjets. 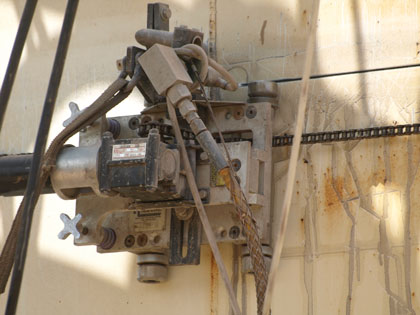 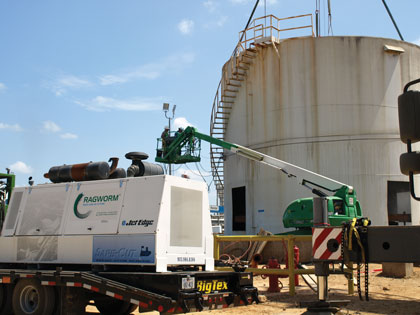 Safe-Cut’s RAGWORM systems can cut through 1/4 inch (6 millimeter) carbon steel at an average speed of 125 feet per hour (38 meters/hour) per cutter and can easily cut through floors in excess of 1 inch (2.54 centimeter) thickness. This process is at least five times faster than cutting with torches and thirty times faster than cutting with gouges. Its Jet Edge Spyder system can cut through 1 inch (2.54 centimeter) carbon steel at an average speed of 30 feet (9.14 meters) per hour, and is ideal for cutting pipelines, steel reinforced concrete, vessels, and fabricated metal structures. Both systems cut with ultra-high pressure water that is mixed with garnet abrasive and propelled through a tiny orifice, creating an abrasive jet that travels faster than a bullet and can cut through virtually anything. 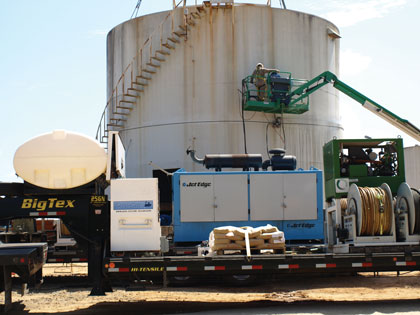 THE SEARCH FOR SAFER ALTERNATIVES
Business has been booming since Safe-Cut first started offering mobile waterjet cutting services. “People in the industry have been very impressed,” says Jimmy Wolford, Safe-Cut’s vice president of operations. “Their response to the system is that it is the best they have ever seen and they all say ‘why haven’t we been doing this before.’”
“The safety aspects speak for themselves,” Wolford continues. “In the refinery industry, industrial safety is a large issue. Torches generate fumes and noxious gases. When you have tanks with hot bottoms that have leaked, there’s no risk of fire with waterjet cutting. When you’re cutting with torches, you have a large risk of fire or even explosions. The conventional methods of cold cutting without heat, such as using air chisels or hand-held water jet cutters, are extremely labor intensive. We are faster, safer and cleaner with less manpower.”
In addition to being safer than torches, waterjet cutting also is much more efficient because waterjets can cut through multiple layers of steel plates and epoxy or fiberglass liners all in one pass, Wolford added. When using a torch, the liners must be painstakingly blasted away or delaminated from the steel plate prior to cutting. 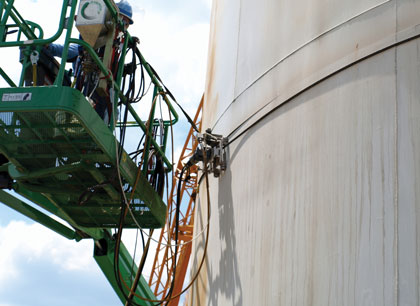 SAFER CONDITIONS WHILE SAVING WATER
Wolford says his customers have been particularly surprised by the RAGWORM system’s efficiency and minimal water and garnet usage. “Eastman Chemical called us to get a quote on a 52 feet (15.85 meter) diameter chemical tank with a potentially hot bottom,” Wolford recalls. “After we gave them our estimate, they asked how much water and garnet we would use and how long it would take us. We told them one day, less than 500 gallons (1892.7 liters) of water and less than 1000 pounds (453.59 kilograms) of garnet. They were very skeptical at first because other companies that quoted the project said it would take four days, require 10,000 to 12,000 gallons (37,854 to 45,245 liters) of water and three to four tons of garnet. We got the job and they wanted us to prove it so we put 500 gallons (1892.7 liters) of water in our tank. At the end of the day, the bottom plate was cut into 6 x 20 feet (1.83 x 6.1 meter) sections and ready for removal with just 375 gallons (1419.5 liters) of water and 800 pounds (362.87 kilograms) of garnet.” 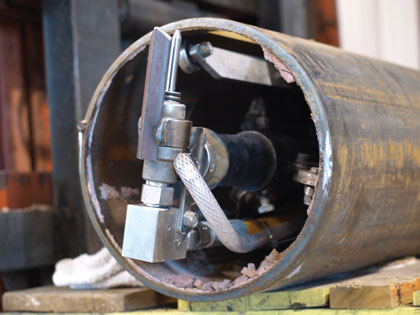 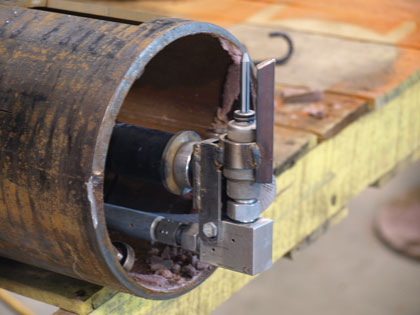 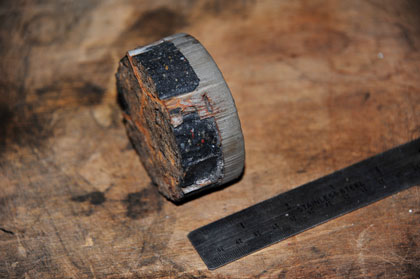 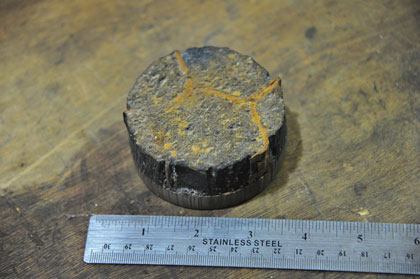 Safe-Cut cut apart and removed a 30 feet (9.14 meter) long, 10 feet (3.05 meter)vessel from a production unit at Delek Refining, LTD in Tyler, Texas. The vessel was constructed of 1/2 inch (1.27 centimeter) steel and 1 inch (2.54 centimeter) of refractory material. Safe-Cut cut through the multiple layers in one pass with a Jet Edge-powered waterjet (Photos courtesy Safe-Cut).
IMPRESSIVE RESULTS
In another project, Safe-Cut fired up its 280 horsepower Jet Edge iP55-280DS pump to make quick work out of a multi-tank demolition project for DCP Midstream, LLC in Carthage, Texas. During this project, Safe-Cut cleaned out and demolished three 35 feet (10.67 meters) diameter, 32 feet (9.67 meters) high tanks. They used their Jet Edge Spyder to cut four entry points in each tank to aid in the cleanout. Six lift points were cut in the top of each tank to facilitate lifting and removal by crane. After the tanks were drained, Safe-Cut remotely cut the center support with the Spyder. This allowed them to hook the waterjet cutter to the outside of the tank so they could cut off the top halves of each tank and remove them with a crane so demolition could be finished with shears. Safe-Cut chose the Jet Edge iP55-280DS pump for this project because it allowed them to run two waterjet nozzles and work faster.
In another waterjet cutting feat, Safe-Cut helped Delek Refining, LTD of Tyler, Texas, out of a tight spot—literally. Delek needed to remove a 30 feet (9.14 meter) long, 10 feet (3.05 meter) diameter horizontal vessel from the inside of a production unit. Traditional cutting methods would not work because the vessel was surrounded on all sides by pipe and equipment. Adding to the challenge, the vessel was lined with 1/2 inch (1.27 centimeter) steel and 1 inch (2.54 centimeter) of refractory material. Safe-Cut used its Jet Edge iP55-280DS pump to create ultra-high pressure water and make a single cut through the multiple substrates at one time. They cut the vessel in twelve pieces, and then cut two holes in each piece with a specialized circle cutter they designed to quickly cut holes. The holes provided a lifting point to remove the pieces by crane.
“This job presented multiple challenges, including a day of rain, but we still completed it in only three days,” Wolford recalls. Wolford notes that Safe-Cut chooses to power its waterjet cutting systems with Jet Edge pumps for their efficiency and cleanliness compared to other cutting processes. “Using the Jet Edge pumps and cutting at 50,000 psi allows us to cut efficiently while using a minimal amount of water and less garnet than other cold cutting methods,” Wolford says. “Since less water is used, there is not as much of a mess to contain and clean up.” ■
_________________________________________________________________________
ABOUT THE AUTHOR
Nancy Lauseng is the marketing manager for Jet Edge, Inc., a global manufacturer of ultra-high pressure waterjet equipment. For more information about Jet Edge, visit www.jetedge.com, call 800.538.3343 or email sales@jetedge.com. For more information about Safe-Cut, visit www.safe-cut.com, call 903.986.8386, or email info@safe-cut.com.
_________________________________________________________________________
MODERN PUMPING TODAY, March 2013
Did you enjoy this article?
Subscribe to the FREE Digital Edition of Modern Pumping Today Magazine!