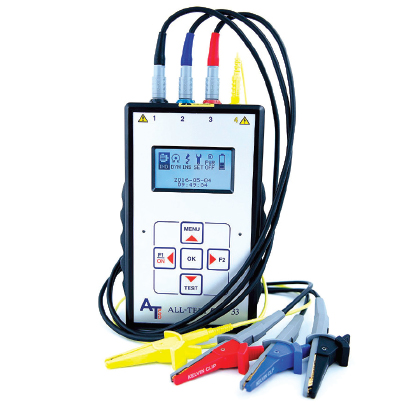 Ethanol has been a clean-burning fuel used in the United States since the 1850s. Ford’s Model T automobile was designed to run on ethanol, and while ethanol was banned during the Prohibition era, it gained traction in the 1970s at a time of high gas prices and concern around oil imports. Ethanol made a major come-back when the Renewable Fuel Standard was initiated by Congress in 2005 to set some minimum requirements for using renewable fuels, and now, about 14 billion gallons of ethanol are added per year to gasoline consumed nationwide. 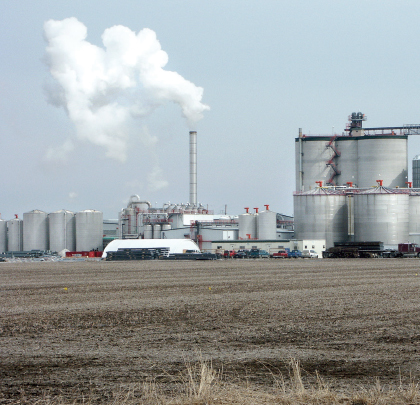 One of the companies dedicated to contributing to America’s sources of renewable energy is Cardinal Ethanol. In 2008, Cardinal Ethanol commissioned a natural gas fired ethanol producing plant in the heart of the Corn Belt. Located in Indiana, this ethanol plant produces approximately 100 million gallons of ethanol per year, in addition to 340,000 tons of dried distillers grains with solubles that are distributed to companies who produce food for livestock and poultry.

In order to produce 100 million gallons of ethanol per year, the plant has to ensure their equipment operates reliably 24 hours a day, 7 days a week. The in-house maintenance team at the ethanol plant schedules “planned shutdowns” twice each year, once in the spring and once in the fall, to perform maintenance on the equipment and machinery operating in the plant. During the fall 2015 shutdown, four new motors were installed to drive the conveyor belts that fed the corn in through to the ethanol processing plant.

In December 2015, the maintenance team noticed the grain flow was being interrupted. Mark Durr, maintenance project manager at the ethanol plant, swiftly investigated the grain delivery system and determined that the interruptions in grain flow were being caused by intermittent shutoff of the conveyors. Mark then instructed his in-house maintenance team to perform several tests on all four motors that drive the corn conveyors. 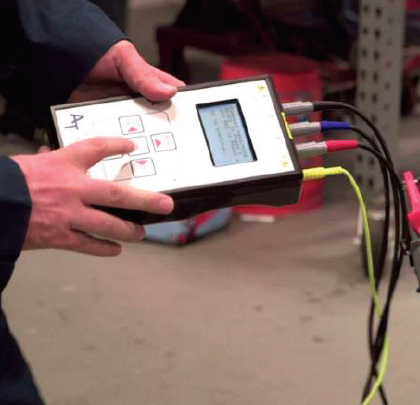 “I instructed my technicians to test all four motors, which ranged from 40- to 60-horsepower, and our meg-ohm meter showed the coils were fine, no short turns and nothing going to ground,” explains Mark. “When we used the ALL-TEST Pro 33 IND™, that motor testing instrument showed us the rotors were bad.”

Mark immediately contacted the general contractor who had installed the motors to inform him of his discovery. The contractor was curious about Mark’s conclusion that there was a problem with the rotors. The motors were brand new, and the contractor could not believe that all four motors would have rotor problems. When asked how he came to this conclusion about the rotors being the root cause of the problem, Mark explained to the contractor that he had an AT33™, which is a de-energized motor testing instrument that shows the complete condition of the both the stator windings and the rotor.

“I had purchased the AT33™ motor testing instrument a little over a year ago, shortly after I began working at this plant. We are focused on preventive maintenance to keep this plant up and running, and that means having the right tools to prevent plant shutdowns,” states Mark. “When you have a problem with a motor, a meg-ohm meter, multi-meter, and LCR meter (L-inductance, C-capacitance, R-resistance) are not going to tell you if there is a problem with a rotor, but an AT33™ will.”

“The report from the service center, confirming the rotors were bad, was not a surprise to me,” shares Mark. “We have used the AT33™ quite successfully on several motors, because we know that more common testers don’t have the capability to show rotor health. This is one of the main reasons I bought the AT33™, because of its ability to test the rotor. In this case, it really came in handy.”

The AT33 IND™ instrument is an excellent tool for troubleshooting, inspection of incoming or stored motors before installation or repair and shows the complete condition of the stator windings, the rotor, contamination, ground fault, and connections.

This instrument presents an exciting break-through in de-energized testing. Within minutes the operator can get a complete picture of the condition of the motor without having to stress-test the windings or use other more expensive or elaborate instruments, which can be difficult to operate and analyze captured data with.

Providing, two tests in one, the instrument can be used in two modes: Static and Dynamic. Both quickly collect data in the auto mode and there is no need to operate a lot of difficult to understand buttons.

It is critical to inspect new motors and stored motors before they are installed into a system. Spending a few minutes to test a motor before installing it can save thousands of dollars in maintenance, and in some cases, shutdown costs.

The AT33™ de-energized motor testing instrument, which performs both Static and Dynamic tests, is a proven asset for revealing the complete condition of the motor rotor and stator windings and also helps the maintenance technician or operator understand if there are any issues with contamination, connections, and ground faults.

Originally founded by twelve members from Randolph County, Indiana, the Cardinal Ethanol project was officially organized in February 2005 with the intention of planning, constructing and operating a 100-million-gallon dry mill corn-processing plant to benefit investors, farmers and the community. For more information, visit www.cardinalethanol.com.

Since 1985, ALL-TEST Pro, LLC has provided industry with the most advanced predictive maintenance testing and troubleshooting tools for AC and DC motors, coils, windings, transformers, generators, and more to a wide range of industries worldwide. With a full line of testing instruments, software, accessories and training programs, ALL-TEST Pro has the tools you need to perform advanced non-destructive motor testing and analysis for both de-energized motor circuit analysis and energized electrical signature and power analysis. The extensive capabilities of the instruments, coupled with dependable post-sale training and technical support, ensure improved productivity, reduced downtime, and a rapid return on investment. For more information, visit www.alltestpro.com.