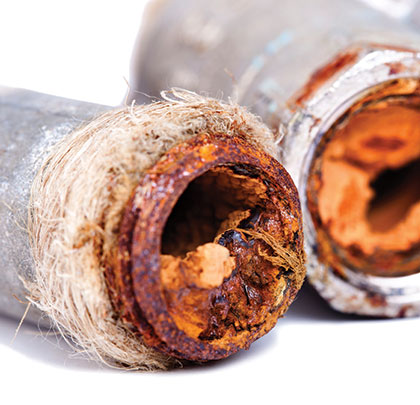 The growing demand for water for industrial applications, power production and water supply has resulted in an increasing need for water treatment. The water used in industry comes from a range of sources such as rivers, lakes, wells and oceans and contains dissolved and suspended solids. In addition the industrial world has to reuse water which in turn causes it to be highly concentrated in silicate, iron scale and calcium carbonate that cause limescale build up and rust.
Limescale deposition results in the need for regular shut down in order that build-up can be removed. Sometimes, this shutdown will be part of a planned maintenance program but on other occasions the system may become severely or even completely blocked with limescale, making it necessary to remove the equipment from service until the blockage is cleared. Scale deposits can also increase corrosion. This is due to entrapped oxygen and also because scale itself is sometimes corrosive to the surface with which it is in contact. Also, scale will interfere with the action of inhibitors in the system, keeping them from reacting with the surface below the scale. If the scale is patchy, the differential aeration between the clean surface and the scale surface may cause a corrosion cell to set up.

RUST THROUGH OXIDATION
One of the chemical characteristics of iron is its chemical reaction to oxygen. When there is more dissolved oxygen in water, iron is easily oxidised and grows into rust (Fe2O3). In addition this ferrous iron is a catalysis that continuously accelerates the anode action so that rusts grows inside the pipe.
Generally, this is called red rust but electronic water treatment (EWT) devices such as Scalewatcher changes it into black rust shown as below
3Fe2O3 · nH2 O + e- ⇒ 2Fe3O4 + 1/2O2 + 3nH2O
This cathode action gradually changes red rust into brown and then into dark brown rust (Fe3O4). Called magnetite it makes it possible to extend the life span of pipe material by forming a film on the inside of the pipe wall which prevents rust growth. Red rust accelerates scale deposition, but the transformation into black rust by EWT means that the red rust is removed together with the scale in the water flow.
ELECTRONIC SCALE REMOVAL
To explain the effect of electronic scale removal it is first important to understand the major factors that cause scale. Whilst scale can be a complex of many minerals, calcium carbonate is the most prevalent in industrial processes.
SUPER SATURATION
Aqueous solutions can become supersaturated, which means that they contain higher concentrations of dissolved solute than their equilibrium concentration. Such solutions are not stable and are easily triggered into dropping back to saturation level, forcing the dissolved compound to precipitate. Even when a bulk solution is less than fully saturated, scale formation can occur spontaneously due to localized super saturation, on a surface for example with a drop in calcium carbonate solubility, leading to the formation of mineral scale deposits.
In RO, the raw water and its components pass through the membrane filtering the pure H2O. Therefore there is a steady process of supersaturation and precipitation of the water through the membrane. Within this environment electronic water conditioners, such as Scalewatcher is the ideal solution for removing and preventing the membranes being clogged with scale. As electronic water treatment (EWT) changes the shape of the molecules from rough to smooth, they do not form a matted structure and are washed away thereby preventing the membranes from being clogged which in turn reduces maintenance shutdown and energy costs.
ELECTRONIC WATER CONDITIONING
EWT is a non-invasive system utilizing a solenoid coil or coils wrapped around the pipework to be treated. A continuously frequency changing signal generator, within a specified range, supplies current to the coils. The pulse shaped current creates an induced electric field, concentric around the axis inside the pipe. As a consequence to this arrangement, any charged particle or ion moving within the field experiences a so-called Lorentz force generated by the interaction between charged particles and magnetic and electric fields.
The treatment influences the initial nucleation, resulting in crystals that do not “stick” together. Untreated water builds up matted structures that continuously grow. This treatment creates idiomorphic, scattered crystals, which do not form matted structures. They have a rotundas shape, which means that they have a larger volume in relation to a smaller surface. This feature makes them sensitive to water currents and they are easily flushed out of the pipeline. As no new scale layers are formed, the sheer force of the water flow will gradually remove existing layers of scale. The ability to adjust power, frequency and coil configurations of products like the Scalewatcher on site enables performance to be optimized with no downtime and no pipe replacement. 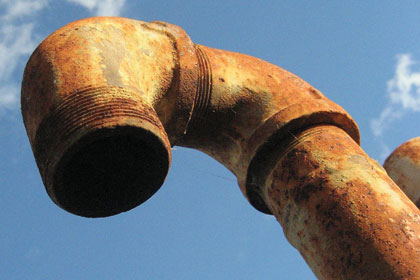 TWO EXAMPLES
River Water Used in a Compressor for Cooling Water Line
The pipe work was clogged with scale which resulted in a safety device automatically stopping the compressor which had overheated. The main composition of the scale was calcium carbonate and iron scale. When the temperature of cooling water was over 194ºF, the compressor stopped automatically. The river water, gathered in a water pond cools the compressor after passing through a strainer. After cooling the compressor, the river water gathers at the return sump and then it is sent to the water pond by a circulation pump. It was difficult to pull up the screen of the strainer because 0.2 inches (5.08 millimeters) in diameter of rust adhered to the screen case of the strainer. Scalewatcher was installed on the discharge side of the pump. After about three weeks, red rust inside the screen case of the strainer disappeared and remaining rust was changed into a black color. And then it became easy to pull up the screen. In the compressor, the temperature of the cooling water didn’t go up to more than 176 degrees Fahrenheit (80 degrees Celsius) and it made it possible to operate the compressor safely without interruption.
Iron Scale Caused by Chlorine in Power Plant
Seawater was used in a pipeline supplying analyzing equipment. The line was clogged with micro-organisms and iron scale. The strainer had to be cleaned every week. The main composition of the scale was Fe2O3 and micro-organisms. The object of the Scalewatcher test was to examine whether Scalewatcher is effective on scale caused by dissolved Chlorine. Scalewatcher was installed on the line between the water pump and the strainer. After a month, the rust and hard scale inside the pipeline was softened. After a further three months the rust (Fe2O3) was changed to black colored Fe3O4, the strainer was not clogged and the microorganisms had disappeared. This means that black colored Fe3O4 is effective for prevention of corrosion by ionized chlorine. ■
About The Author
Jan de Baat Doelman is president of Scalewatcher North America Inc. The Scalewatcher is an environmentally friendly alternative to chemical and mechanical descaling. Launched in the 1980s it has successfully treated hard water problems for industrial manufacturers as well as water companies, oil producers, farmers, horticulturists, shipping companies, shopping centers, school, universities and government establishments. For more information, call 610.932.6888, email sales@scalewatcher.com, or visit www.scalewatcher.com.