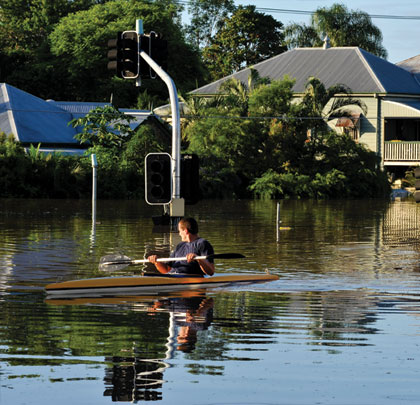 It’s safe to say that most of the country has experienced extremely volatile weather within the last few years. Research shows that weather patterns are, and will continue to be, increasingly volatile due to changing climate trends. Whether it’s dauntingly cold temperatures or unexpected heavy snowfall—it’s no longer a question of if severe weather will occur, but rather when, and when it will affect your assets.
The risk of floods are increasing as the climate becomes more volatile, and now more than ever, it is important to understand what led us to this point and how to stay ahead of flooding waters. Information is power, and preparation is key to protecting assets in an emergency situation.
IMPACTS OF CLIMATE CHANGE
The earth’s climate is influenced by both natural and human factors, from seasonal ocean cycles like El Niño and La Niña to deforestation, agriculture and urbanization.
Communities, infrastructure and governments are all at risk of negative impacts due to a changing climate. One of the most devastating results is the increase in the frequency of volatile weather events, such as flooding. Scientists have taken note of a greater number of the more extreme weather occurrences in recent years. New research suggests that warming in the arctic region is resulting in a weaker temperature contrast that is slowing down the jet stream. This has led to slower moving weather systems or ones that have been persisting for longer periods of time over the same areas. Extreme weather tends to occur more often with these stalled weather systems.
In 2007, the Intergovernmental Panel on Climate Change (IPCC) concluded that intense rain events have become more frequent in the last fifty years. This, combined with increased run-off from land use changes, means more significant flash flood events can and will occur. In addition, as the oceans warm, scientists predict that the number of hurricanes, and potentially their intensity, could increase. Higher sea levels from warmer waters also can lead to greater storm surges.
According to the U.S. Geological Survey, flooding already costs the U.S. more than seven billion dollars in damages, killing more than ninety people annually. Increased flooding has potential to wreak even more havoc on dense populations, with 3800 towns and cities in the flood plain.
From that, it’s not surprising that floods claimed more in terms of number of lives and property damage than any other type of natural disaster during the last century. By the end of the century, assuming no change in built infrastructure or values, a 2013 article in the Journal of Flood Risk Management projected an increase of approximately 30 percent in damages from flooding alone. These trends are likely to continue; an article in Nature found the recent emergence of a statistically significant positive trend in the risk of great floods is consistent with results from a climate model, and that model suggests that the trend will persist.
Accurate, real-time data give a complete picture of conditions decision-makers face, essential in order to properly prepare for an increase in frequency and severity of floods. Improved visibility allows faster, more informed decisions based on aggregated data rather than estimating when a disaster will affect certain assets. Traditionally, several disparate sources were needed to gather information on the two key factors that determined flood conditions: flooding parameters and weather conditions. Today, software can integrate all pertinent information into a single source that provides a clear, real-time snapshot of the environment.
FLOODING PARAMETERS: WHAT TO WATCH FOR
A clear understanding of the most critical parameters to monitor for a potential flood is essential: water level, tide prediction and wave height. New technology gives asset managers the ability to set alert parameters and to be notified whenever one of these factors crosses a threshold that triggers a response.
Tide Prediction
Tide predictions are based on the gravitational force of the moon and sun acting on large bodies of water at a given time. These are especially helpful when severe weather and rainfall are approaching, as the tide can significantly impact the severity of conditions. For example, a storm that hits at low tide may not require the same level of preparation and resources as a storm that arrives at high tide.
Water Level
The measurement of a body of water’s level is an obvious factor when determining the likelihood of a flood, but quick access to accurate readings may be difficult. Plotting water level observations from thousands of ocean buoys and river gauges alongside other high-impact weather information such as radar and local storm reports, a system manager increases his or her situational awareness with a real-time, geographic representation of high-impact ocean tides and river depths.
In addition, hourly forecasts of ocean water levels give critical guidance on where large-scale weather patterns will have an impact on tide levels in the future. This pinpoints specific times of day where a normal tide may be higher than expected due to strong storms and winds. 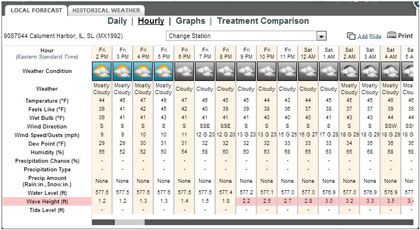 Wave Height
High tide timing and levels are key as well as wave conditions during that time frame, to help best estimate how infrastructure may be impacted. High waves may have little impact if they are predicted to occur during low tide. These same high waves occurring during a higher than normal tide may have a much higher impact and will direct the size and type of response necessary. 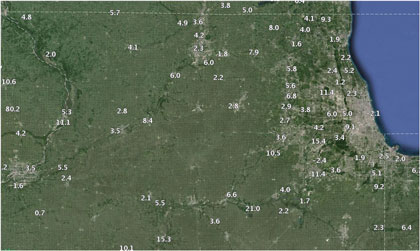 WEATHER FORECASTING IS ESSENTIAL
Current technologies can combine real-time data with accurate weather forecasting to give public safety officials an even more powerful tool for storm preparedness. Operators now have the ability to use a real-time map of water conditions that can also display hourly forecasts to achieve optimal awareness of when water levels, tides and wave heights will coincide with high-impact weather.
The climate is changing, and with it the frequency and increasing severity of extreme weather events, including floods. Pumping system operators must have a clear view of current circumstances in their territory, as well as an accurate understanding of how forecasted weather events will strengthen or mitigate the impact of severe weather. With an aggregated view of flooding parameters and integrated weather forecasts, resources can be mobilized more quickly, communities can receive more advanced warning, and managers can be better informed to protect people and infrastructure. ■
[divider]

ABOUT THE AUTHOR
Jeremy Duensing is the transportation product manager at Schneider Electric based in Minneapolis. In addition to several years on the forecast desk, he has also started a forecast verification program and is a member of the American Meteorological Society ITS/Surface Transportation Weather Committee. Jeff Johnson currently serves as the Schneider Electric’s chief science officer and is a certified consulting meteorologist, whose certification illustrates the highest level of professionalism and overall knowledge of the science of meteorology.  For more information, visit www.schneider-electric.com.

MODERN PUMPING TODAY, August 2014
Did you enjoy this article?
Subscribe to the FREE Digital Edition of Modern Pumping Today Magazine!