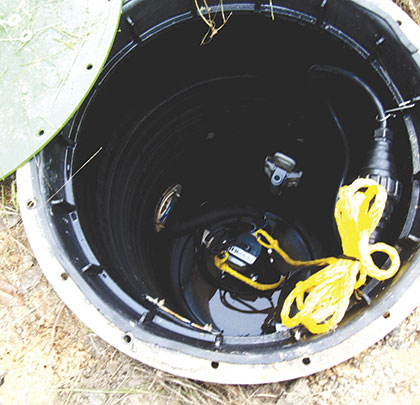 In part 1 of this series, we detailed some of the lingering damage left in the wake of Hurricane Katrina throughout the septic system of Kiln, Mississippi—just an hour outside of New Orleans. However, Kiln’s deteriorating septic systems are far from unique. Approximately 25 percent of North America’s homes rely on septic tanks—including suburbs and small towns as well as rural areas—and hundreds, if not thousands, fail daily, creating health hazards and the potential to deliver fecal coliform bacteria to surface waters.
In this month’s conclusion, we’ll walk through how the implementation of E/One’s All-Terrain Sewer™ (ATS) low pressure system offers a simple, effective, and inexpensive solution for not only the Kiln but also for septic systems worldwide. 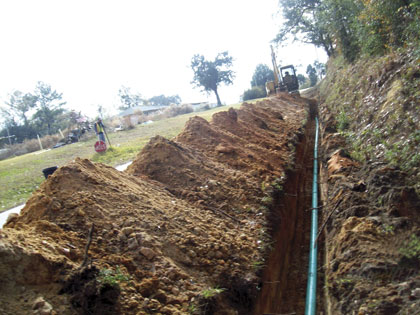 Featured Image: Top view of E/One grinder pump station.
Above: Pressure sewers use small-diameter pipelines, minimizing environmental disruption.
WHEN OTHER SEWER SYSTEMS ARE NOT PRACTICAL
The problem got so bad south of I-10 in Hancock County that the Mississippi State Department of Health prohibited the approval of septic tanks in that area, partially because the soil structure is not conducive to septic tank use. One state report published in 1998 stated “a (septic tank) failure rate of 80-percent was assumed.”
Although funding was not an issue for the Kiln Wastewater Collection System S-6, the project faced other challenges.
Clemens, who was Compton’s project engineer for the new system, says, “The biggest challenge with Kiln was the relatively sparse population distribution within a broad geographic area. The area to be serviced was over 25-square-miles with only approximately 1,000 customers spread across it. The typical distance between residences is significant,” he says.
“Additionally, the region has a mix of terrain including low-lying, flat areas along the Jourdan River, low wetland type areas, as well as areas of significant topography with elevations of 50 feet mean sea level (msl) dropping to as low as 5 feet msl,” Clemens says. “There were also several significant water bodies to cross as well as major state highways that could not be open cut. The geographic and physical challenges encountered typically lend an area to a pressure system rather than a gravity system.”
“In the end, the low-pressure won out on cost feasibility over the gravity system and the vacuum system had too many geographic and topographic issues to overcome,” says Clemens. “The STEP system was a relatively competitive concept, but the region was also in need of a centralized wastewater treatment plant. With the cost of a major treatment plant as a given, the STEP system was not as economically feasible.”
“Cost feasibility studies were done by the design team (which) consistently showed a gravity system to be financially infeasible when compared to a centralized, low-pressure grinder system,” says Clemens. “A centralized vacuum system was considered as well. The pricing of the vacuum system was competitive with the grinder pressure system; however, the topographical challenges to a vacuum system as well as the broad area of low density service ultimately favored a low pressure grinder system.” 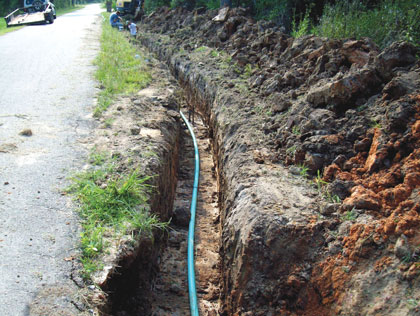 Small pressure sewer mains require only small trenches during installation.
A CATEGORY FIVE SOLUTION
Environment One Corporation emerged the winner of a public bid process. In 1971, the Niskayuna, N.Y.-based manufacturer pioneered the implementation of All-Terrain Sewer™ (ATS) low pressure systems and today its simple, effective and inexpensive solution comprises the largest installed base of pressure sewers in the world, serving more than one million end-users daily.
The heart of E/One’s ATS begins with a tank about the size of a dishwasher that is buried in the ground, often in the same footprint of a decommissioned septic system. Interior components include a one-horsepower semi-positive pump that grinds waste into fine slurry. Its robust torque can propel the liquid through the inflow-and-infiltration-free pressurized 2-to-4 inch pipe for a distance of more than two miles—even uphill—to a force main or treatment plant.
Clemens says his first project exposure to E/One’s ALL-TERRAIN SEWER came in 1995 at the Port of Pascagoula. “The Kiln project ultimately used E/One grinder pumps because collectively the design team and ultimately the contractor selected relied on the E/One pump’s ability to ensure the project would work as designed,” says Clemens.
According to one Compton Engineering study, the sewer collection system totals approximately 216,480 linear feet of force main consisting of PVC, C 900 and HDPE pipe in sizes up to 12-inches in diameter and includes bores under rivers, bayous, gas pipelines and state and county roads.
“The broad area to be sewered only had to have four major pump stations (consisting of a buried pre-cast concrete wet well, with either two or three variable speed, submersible pumps and controls) with everything in between directly connected to the E/One pumps and a small diameter force main system. The project’s design—which needed a pump system with the ability to meet extreme and changing heads conditions—fell within E/One’s wheelhouse.”
Additionally, says Clemens, “The option of (E/One’s) flood-proof chambers and the simple pump exchange process in the stations were attractive. The ability to pump against a broad range as well as extremely high head conditions made the pumps desirable in a lot of applications.”
The local district owns and maintains the residential customers’ pumps. While the district is certified to do its own repairs (E/One’s record surpasses its estimated eight—to-10-year mean time between service calls, including no preventative maintenance), it also utilizes E/One’s Mississippi distributor, Magnolia Pump.
The $13.7 million project (not including the treatment plant) today replaces septic tanks and privies with E/One grinder pump stations (simplex, duplex and triplex) installed along the right-of-way or near almost 900 homes and 30 businesses. “Based on the final costs it worked out to around $13,000-$16,000 per customer of capital expenditure,” Clemens estimates. 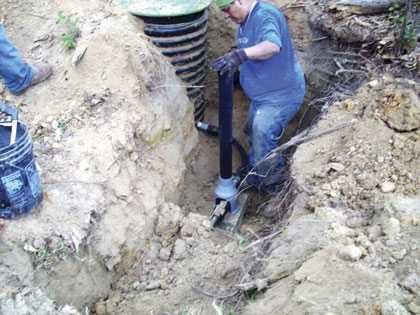 Grinder pump station installation.
LAISSEZ LES BONS TEMPS ROULER!
One immediate effect is water quality. Pitalo says, “[Our rivers are] definitely being cleaned up by the new system. The majority of homes in and around waterways that lead to the Bay of St. Louis have been connected therefore minimizing any opportunities of damaging waterways.”
Equally important, the installation of an ALL-TERRAIN SEWER is contributing to Kiln’s economic development.
“The presence of this system has opened the entire area up to additional housing opportunities as well as industry,” observes Clemens. “The absence of a sewer system all but stifled commercial growth and severely hindered residential development, especially in waterfront areas. The presence of this system has already led to the initiation of high-end waterfront residential developments and business development around the airport and within the Kiln. The local McLeod Park also has been able to provide sewer services within the park, making it a viable economic tool in the county presently receiving thousands of overnight visitors per year.” ◆
For More Information:
Low-pressure, gravity-independent, contour-following sewage collection systems were pioneered by Environment One. E/One Sewer® systems have proven to be an economical and effective method of sewering otherwise difficult land areas, such as flat, wet, rocky and hilly terrain. E/One’s Sewer Systems business is ISO 9001:2008 certified. For more information, visit www.eone.com.
____________________________________________
MODERN PUMPING TODAY, September 2016
Did you enjoy this article?
Subscribe to the FREE Digital Edition of Modern Pumping Today Magazine!