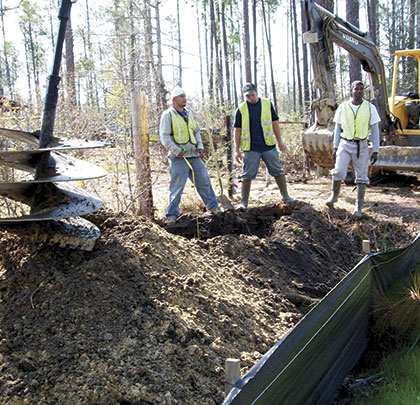 The eye of Hurricane Katrina made its final landfall in August 2005, along Mississippi’s Hancock County (bordered by the Gulf of Mexico and Louisiana), crossed Interstate 10 and headed a few miles north to Kiln—an hour’s drive northeast of New Orleans—where it proved equal opportunity in its destruction, ravaging the property and livelihoods of rich and poor, from unknown citizens to one of pro football’s most iconic names—Hall of Fame quarterback Brett Favre.
STARING DOWN THE STORM
Out on Irving Favre Road—named after Brett’s late father—his mother and relatives had decided to ride out the storm at the family compound where they had done so during another legendary weather event, Hurricane Camille, which in 1969 leveled Gulfport and Biloxi (Hancock is part of its three-county metropolitan area). While the house—built in 1950—survived that assault, Katrina’s sustained 120 mph wind and record 6- to 12-mile storm surge destroyed Brett’s childhood home.
In the immediate aftermath of “The Storm” (Katrina’s victims remain seemingly reluctant to call it by name), few could prophesize anything positive in its wake. Half of Kiln (population 2,250) was under water and its town offices operated out of FEMA trailers. While many across the affected region continue to fight to this day for compensation from their private insurance companies, every U.S. taxpayer would play a role in its recovery effort.
The historically cash-strapped region struggled in the best of times and it’s doubtful much of it could have recovered from Katrina barring outside help. Western Hancock County, home to the John C. Stennis Space Center—NASA’s largest rocket engine test facility—would continue to prosper after repairs. Travelers lured away from I-10 by Favre’s Green Bay Packers legacy, however, would never contribute enough to bankroll Kiln’s rebuilding efforts.
“The Kiln” (as it is always referred to locally, the “n” silent) was named for the once plentiful charcoal kilns in the area when great lumber mills provided steady employment. As they disappeared, some residents turned moonshiners. Al Capone reportedly sourced liquor there during Prohibition and legend says it was even marketed in Chicago as “Kiln Lightning.” Today, it’s also the home of one of Mississippi’s largest equine centers where “Lightning” might be the name of a race or show horse it breeds and trains. 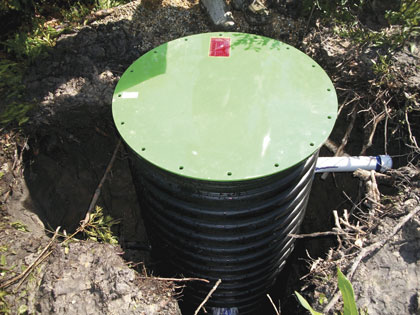 Featured Image: Use of a power auger is an efficient, clean, low impact method for installing E/One grinder pump tanks in the ground—site conditions permitting (photo credit: Compton Engineering, Inc.).
Above: A high flood grinder pump station, rated for up to 15 feet of flood over cover, protects the integrity of the grinder pump system in flood prone areas (photo credit: Compton Engineering, Inc.)
A BIG OL’ GUMBO OF UTILITY SYSTEMS
To boost the area’s standard of living and economic opportunities, the Mississippi Gulf Region Water and Wastewater Plan was laid out in 1999 to develop a regional infrastructure “backbone.” But most of the available money to the Gulf Region’s six counties was allocated to the stretch between I-10 and the Gulf of Mexico, a patchwork quilt of about 185 different service providers and over 85,000 individual on-site sewage systems handling wastewater from approximately 195,000 housing units. Towns like the Kiln were included but not deemed a priority.
Katrina changed that. A year after The Storm, state leaders decided to implement the plan in full. It recommended over $600 million to fund water and wastewater projects in five counties, Hancock among them, to support existing and future growth patterns—particularly new post-Katrina house construction; economic development; and, emphasizing a regional concept for infrastructure management.
“Within a year after Katrina, as part of (Gov. Haley Barber’s) recovery efforts, the Gulf Coast Utility Authority was created,” says Geoffrey F. Clemens, P.E. and president of Compton Engineering, Inc. in Bay St. Louis, Mississippi. “The focus was not only to be on fixing and protecting what existed but also identify utility projects to mesh with the recovery and growth plan for the region.”
The master plan for Hancock County identified projects to be constructed over roughly a five-to-ten-year time frame.
“In total, Hancock County alone had well over $120 million in water and sewer improvements allotted,” says Clemens. “The specific sewer project for the Kiln was readily identified as a priority project … It was ultimately funded with over $20 million to include the sewer collection and transmission as well as a treatment plant” to be funded through federal appropriations of disaster relief money distributed through HUD and the Community Development Block Grant program to the Mississippi Department of Environmental Quality. 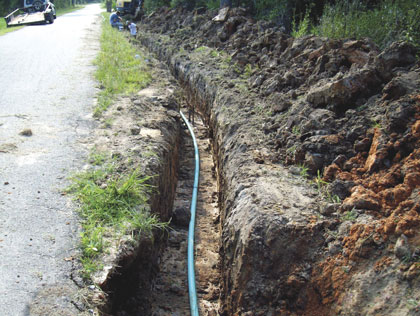 Small diameter flexible pipe being installed alongside roadway with minimum environmental disruption (photo credit: Compton Engineering, Inc.).
AN ECOSYSTEM UNDER SEPTIC SIEGE
“The Kiln Utility and Fire District has never had any sewer collection systems or even a treatment plant to send it to,” says David Pitalo, executive director of the Hancock County Utility Authority who, over 9½ years, has overseen $142 million worth of projects that the entity received from the Mississippi Gulf Region Water & Wastewater Plan of 2006. “With the funding from the Gulf Region Plan, we were able to build a new wastewater treatment plant and a sewer collection system. Also, factored in is future growth of the area,” Pitalo adds.
“[The new plan] fit into the previous mandate. We took many houses off of septic tanks that drained directly into rivers, streams, and then eventually the Bay of St. Louis,” says Pitalo. “The overall objective is to clean up all waterways in Hancock County and this was a significant benefit to that objective. We had many aging and failing septic systems and our objective was to take these offline, clean them out and fill them in. Doing this would keep all of the leaking septic tanks from getting into our waterways.”
Kiln’s deteriorating septic systems are far from unique. Approximately 25 percent of North America’s homes rely on septic tanks—including suburbs and small towns as well as rural areas—and hundreds, if not thousands, fail daily, creating health hazards and the potential to deliver fecal coliform bacteria to surface waters.
A LOOK AHEAD
In next month’s conclusion, we’ll walk through how the implementation of E/One’s All-Terrain Sewer™ (ATS) low pressure system offers a simple, effective, and inexpensive solution for not only the Kiln but also comprises the largest installed base of pressure sewers in the world, serving more than one million end-users daily. ◆
For More Information:
Low-pressure, gravity-independent, contour-following sewage collection systems were pioneered by Environment One. E/One Sewer® systems have proven to be an economical and effective method of sewering otherwise difficult land areas, such as flat, wet, rocky, and hilly terrain. E/One’s Sewer Systems business is ISO 9001:2008 certified. For more information, visit www.eone.com.
____________________________________________
MODERN PUMPING TODAY, August 2016
Did you enjoy this article?
Subscribe to the FREE Digital Edition of Modern Pumping Today Magazine!