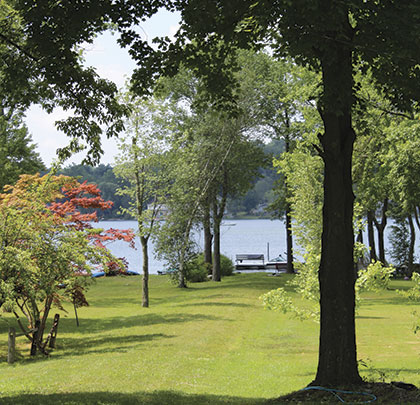 It only took a few generations and several hundred dying septic systems to age an idyllic vacation spot like Peach Lake. 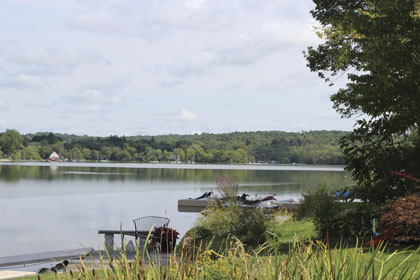 Peach Lake is a quiet, private lake located in Putnam and Westchester counties in New York, about a ninety minute commute from Grand Central Terminal. Single-family homes surround the lake, consisting of both seasonal and full-time residents.
A CLOSER LOOK AT PEACH LAKE
Fed for millennia by fresh flowing springs—with no creeks or rivers for drainage—a basin eventually matured into a 1.5-mile long and half-mile wide aquatic paradise originally named Pechquenakonck by the Kitawonks, a Mohegan group.
Around the dawn of World War I, vacation homes started to occupy the pristine shoreline of what pioneer Dutch farmers first named Peach Pond; later, Peach Lake. Inevitably, water quality deteriorated as the reservoir’s spring intake was supplemented by wastewater flushed from these summer bungalows and cabins, equipped with septic systems that only have a normal life expectancy of ten to forty years.
By the 1990s, the problem of wastewater—mostly during the peak Memorial Day to Labor Day period—was aggravated by the arrival of full-time residents who were upgrading once simple seasonal properties in lakeside communities like North Salem and Southeast into pleasant abodes with additional bathrooms, washing machines and dishwashers.
“Most of the people are here year-round but we do have the 20 to 30 percent that are there in the summer months,” says Warren Lucas, supervisor of the Town of North Salem. “These communities grew up around the lake back in the 20s and 30s and at this point we have in some cases the second or third home rebuilt on these properties.”
Young families purchasing their first houses, retirees and even work day commuters to Grand Central Terminal about ninety minutes away further pushed Peach Lake’s fragile ecology to the brink. 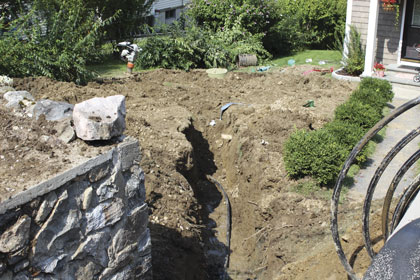 Pressure sewer systems require only shallow trenches.
THE PUSH TO IMPROVE WATER QUALITY
A campaign to improve the water quality of Peach Lake began over forty years ago and gained traction when the Citizens Statewide Lake Assessment Program (CSLAP), a volunteer lake monitoring and education program, began sampling Peach Lake’s water in 1999.
Over the next decade, the project found the “recreational suitability of the lake to be unfavorable” and “‘slightly’ to ‘substantially’ impacted for most recreational uses” like swimming and boating as failing septic systems had a negative impact on water quality.
CSLAP’s reports noted “High coliform counts (resulting in occasional beach closures), along with algal blooms and excessive aquatic weed growth strangled areas near the shores. The aquatic growth may also depress dissolved oxygen in the lake to the point where the fishery may also be affected” and storm events frequently led to fish kills.
A wastewater study showing eutrophication (an excess of nutrients such as nitrates and phosphates) led to Peach Lake’s inclusion on New York State’s List of Impaired Waters.
The situation was fully addressed in 2010 when a new sewage treatment system was designed to replace the area’s 470 deteriorated septic tanks. 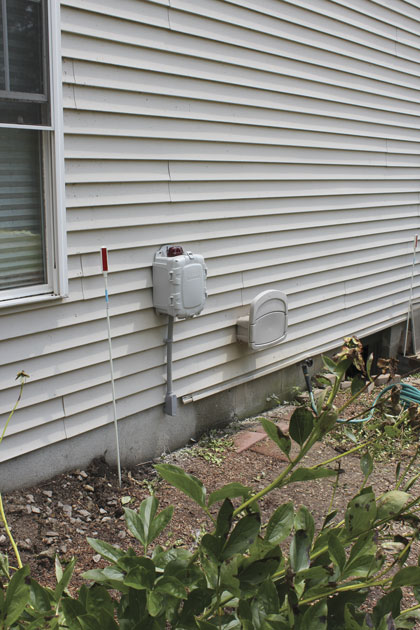 Alarm panels are located on the outside of the home to alert the homeowner or service person about a problem.
LOOKING FOR CAUSES . . . AND SOLUTIONS
Engineers blamed the septic failure on multiple origins. Scores were situated too close to streams, drainage ditches or the lake. Leach fields at many properties were sized to the original summer cottages and not adequate for the additions or newer homes; current regulations require 5 feet between the septic tank and groundwater. Significant numbers failed percolation tests due to poor soil conditions and shallow bedrock.
Executing the 2010 plan would be no easy task as it required the input, cooperation and approval of 1,000 citizens and four lake association boards; the formation of sewer districts which included inter-municipal agreements between North Salem and Southeast and their respective counties, Westchester and Putnam, which border Peach Lake; and, a half-dozen state and municipal agencies including the New York City Department of Environmental Protection (NYDEP) about 50 miles south which receives 10 percent of its drinking water from the Croton Watershed to which Peach Lake belongs.
Financing was equally complicated. The $30 million project would be footed by East of Hudson Funds from Westchester and Putnam counties, the NYDEP and federal American Recovery and Reinvestment Act funds created during the Great Recession to stimulate municipal infrastructure projects.
Residents agreed to levy themselves $1,200 per year per household for thirty years to form the Peach Lake Sewer District. Operation and maintenance costs for a low-pressure sewer system (LPS) incorporating grinder pump stations were calculated at $40,000 annually. The treatment plant’s O&M added another $275,000, planners said.
Public outreach began at grassroots gatherings like pancake breakfasts where surveys and questionnaires were distributed to residents. As with all municipal sewer projects, planners needed to win close coordination and cooperation from homeowners for property visits, maps, surveys, deed preparation, easement negotiations/acquisitions and construction observation on private property.
Seemingly the biggest concern of residents was that an adequate sewer system might increase the density of homes or create condo development. It was agreed that only existing land surveys would be acknowledged with the caveat each home could be expanded or replaced with one new structure.
North Salem and Southeast were divided into two separate State Environmental Quality Reviews for efficiency and less complication given the size and impact of the project.
“I have 74 percent of the homes (360),” says North Salem’s Lucas. “Southeast has 26 percent (120).” The sewage treatment facility is owned in a 74-26 partnership between the two towns.
In order to pamper local sentiment, the head works and micro-filtration facilities of the Peach Lake Sewer Treatment Plant (a small, mostly-automated facility designed to process 170,000 gallons per day) are housed in red and white buildings camouflaged to mimic the ubiquitous horse barns synonymous with the pastoral landscape. 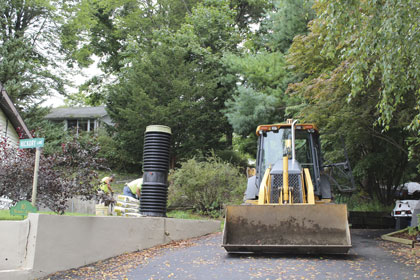 E/One grinder pump stations (shown) can be buried on small lots. Only a few inches of green lid are visible to the homeowner.
A LOOK AHEAD
Two sewer proposals were considered: A gravity/low-pressure hybrid with eight pump stations and a low-pressure sewer system employing grinder pumps at each home (or, where housing is dense, a duplex pump serving multiple dwellings). Next month, we’ll conclude this case study by exploring Peach Lake’s decision and the benefits they discovered. ◆
With corporate headquarters in New York and regional offices and distribution throughout the industrialized world, Environment One Corporation (E/One) is a manufacturer and provider of products and services for the disposal of residential sanitary waste and utility systems for the protection and performance optimization of electric utility assets. For more information, visit www.eone.com.