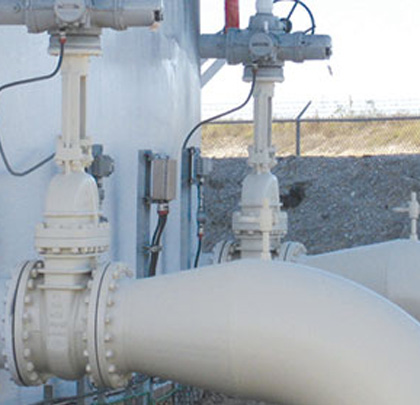 In 2011, an operating division of Martin Midstream Partners (MMLP) began building a single product tank farm at the Port of Corpus Christi, Texas, consisting of six 100,000 barrel tanks and four booster pumps to serve nearby truck and ship loading terminals. MMLP’s primary business lines focus on terminalling, storage, processing, and packaging services for petroleum products and by-products. This encompasses natural gas liquids storage, natural gas storage, sulphur, and sulphur-based products processing, and marine transportation services for petroleum products and by-products. Originally, the facility was designed for a single hydrocarbon product. The terminal’s original specifications did not require any automated valves to isolate the individual storage tanks.
During construction, MMLP decided to upgrade and introduce the capability to handle a second product, which necessitated the requirement of isolating the tanks to avoid cross-contamination. To achieve this, MMLP specified Rotork electric valve actuation under centralised control. The explosion proof Rotork IQ non-intrusive intelligent actuators are monitored and controlled by a Rotork Pakscan P3 digital system, designed specifically for valve actuation duties and the environments associated with hazardous area petrochemical plants and storage areas. The Rotork system incorporates all appropriate interlocks which safeguard the integrity of the terminal operations.
PAKSCAN P3 WIRELESS
The wireless system consists of three main hardware components: a Pakscan P3 master station and wireless coordinator module, as well as a wireless actuator module installed on each actuator on the wireless network.
The master station is fitted with a wireless interface module, which is typically connected to the plant’s control system using industry-standard Modbus protocol over either a serial or Ethernet connection. The wireless coordinator module, which can be mounted, either indoors or outdoors, up to 656 feet (200 meters) away from the P3 master station (further if standard fibre optic converters are employed) functions as the base station for the system’s robust mesh network.
The wireless system operates on the license-free, globally recognised 2.4GHz ISM (Industrial Scientific and Medical) frequency band and has a line-of-site operating range between each device of approximately 98 feet (30 meters) indoors and 328 feet (100 meters) outdoors. Up to sixty actuators can mesh with a wireless coordinator.
GREATER INDEPENDENCE MEANS GREATER RELIABILITY
In a Pakscan wireless mesh network, each actuator on the network can act as an independent router to help signals get to their intended destination. A correctly designed network will be configured to provide two or more paths between each actuator and the wireless coordinator. Therefore, if the normal traffic route is blocked or if a hardware or communication failure should occur, it can be overcome as the network dynamically determines an alternate route for the data to travel. This self-healing network mimics the loop-back capabilities of the established two-wire loop version.
In such a network, privacy and security are high priorities. To prevent unauthorised commands being sent to devices over the wireless network, all control data is encrypted using the Advanced Encryption Standard (AES). Additional encryption is incorporated into the system to prevent unauthorised devices joining the network and to prevent a message replay attack.
The Pakscan P3 wireless network card gives the user access to all the standard control and monitoring features and data available from the wired Pakscan system, together with the diagnostic and asset management information stored as standard by Rotork IQ actuator data logger and configuration files, which is otherwise only downloadable locally, using the IQ hand held commissioning and communication tools. Using built-in web pages it allows easy extraction of these files from the control room over the wireless network. 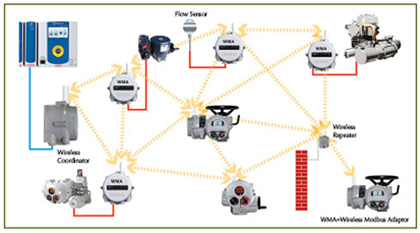