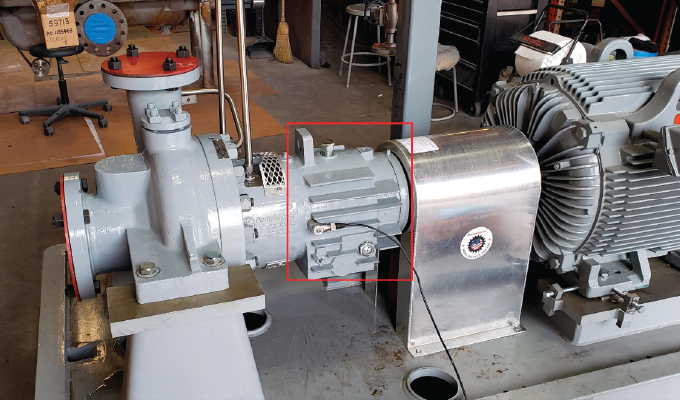 Pumps are subject to many sources of excitation. If you are lucky you can avoid some of them, but some require attention and can lead to serious vibration problems. A chance for resonance should never be underestimated, especially if only critical speeds are considered. Leaving out the individual components such as bearing housings could be problematic.

OEMs should take a note of this early on in the design stage by performing 3D FEA modal simulations of the bearing housing, including the full casing and the baseplate in the model to avoid costly issues down the road. However, the uncertainties regarding the boundary conditions and the unknown damping can lead to deviations up to 20 percent from measurements.

Accordingly, KHE was called to perform modal impact testing on a centrifugal pump bearing housing. KHE performed the measurement per API instructions with the bearing housing mounted on the assembly and the pump not piped up.

The outcome of the impact test was analyzed for frequency response functions (FRFs) to identify the natural frequencies. KHE, in its experience with such modal testing, has identified several pitfalls to be avoided. Impact tests have a low repeatability, so one needs to make sure to take multiple readings and discard results with cohesion values below 95 percent. Know your vibration instruments and the interest range of measurement to excite all the applicable modes and capture at high enough resolution. Supplement your measurements with simulations to discard unrelated natural frequencies excited in nearby components.

In this case, the bearing housing had sufficient margin from the excitations due to its stiff design. Supplementary FEA results implied that the few low frequency modes related to the baseplate would shift considerably after installation with grouting.

KnightHawk Engineering was founded in 1991 and specializes in getting high technology solutions in a short timeframe. At KnightHawk Engineering, we start by addressing the physics of a problem in order to create a unique solution in a timeframe our clients require. KnightHawk has assisted the largest companies in the world, NASA, and some of the major mining operations across the globe. For more information, visit www.knighthawk.com.

MODERN PUMPING TODAY, May 2021
Did you enjoy this article?
Subscribe to the FREE Digital Edition of Modern Pumping Today Magazine!