At the 3A Lift Station Force Main and Plant Headworks in Dayton, Nevada, officials from the Lyon County Utilities Department discovered high sulfide levels present and desired to find a solution. Hydrogen sulfide can lead to odor and corrosion within a water system, so it was highly important that the county find an answer that is both effective and limits ongoing costs. To tackle this issue, Anue Water Technologies (AWT) demonstrated its FORSe 5 odor and corrosion system for treatment of the force main. 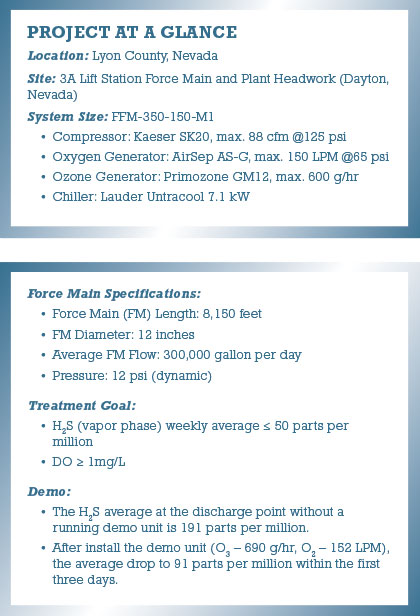 PILOT TESTING
A 2-mile force main was expressing high concentrations of H2S, with peaks of 3400 parts per million and averages of 340 parts per million at its outfall.
A FORSe 5 pilot was installed with an output of 120 grams per hour of ozone and 40 liters per minute of oxygen. Prior to the commissioning of the pilot, total sulfides were measured at a whopping 17 milligrams per liter. After just five days of FORSe 5 operation, these values were reduced to 0.2 milligrams per liter, a 99 percent reduction. Even more, the vapor phase measurements showed similar results, where H2S levels were ultimately driven from over 3400 to less than 10 parts per million.
Under extreme temperature conditions with daily ambient temperatures exceeding 110 degrees Fahrenheit (43.3 degrees Celsius) and high levels of H2S, Anue’s FORSe 5 odor and corrosion control system achieved significant levels of control in less than one week.
Further improvement occurred when the city closes the ARV. The H2S level drop from 95 average to 11 parts per million.

CONCLUSION
The operators were very pleased to find that Anue system’s performance meets H2S target goal of less than 50 parts per million at the discharge location, and the direct injection method performs well with gravity line and low pressure profile force main. Also, closing some of the ARV(s) improved system performance and further reduced the H2S level in the force main and at the discharge location.
A real boon to the process was showing that the effect of the dosage requires fewer than twenty-four hours to see a result at 3A Lift Station Force Main and Plant Headwork. Today, operators report that the system performs with no fault after one year with only routine maintenance recommended by manufacturers required to keep the system running. ◆
For More Information:
Larry Burbach is general manaer and COO at Anue Water Technologies, a leading manufacturer of engineered solutions for water treatment, empowering municipalities, industrial, and commercial companies who encounter challenges with wastewater by creating tailored and turn key product lines that provide highly effective solutions for odor, corrosion, fat, oil, and grease issues. Anue Water Technologies focuses on the delivery of technology that is sustainable with proven applications that enhance people’s lives. For inquiries, write lburbach@anuewater.com. For more information, visit www.anuewater.com.
____________________________________________
MODERN PUMPING TODAY, March 2016
Did you enjoy this article?
Subscribe to the FREE Digital Edition of Modern Pumping Today Magazine! 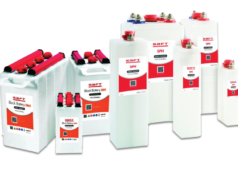