Approximately 30 miles east of Las Vegas, the Southern Nevada Water Authority is in the final stages of constructing one of the most elaborate, important—and expensive—water supply facilities in the world.

The Lake Mead Low Level Pumping Station will deliver up to 900 million gallons a day to two water treatment facilities that send water to Las Vegas and other regions of southern Nevada. The $650 million project broke ground in mid-2015 and will become operational in 2020. The pumping station is designed to ensure Southern Nevada maintains access to its primary water supplies in Lake Mead. A drought that began in 2002 has caused elevation in Lake Mead to fall more than 130 feet since the drought began.

Powerful pumps are the engine behind the sophisticated project, which features twenty-two low-lift pumps and twelve high lift pumps manufactured by Spain-based Indar. The pumps will be able to lift up to 900 million gallons of water each day from hundreds of feet below the surface. The water will be pushed through pipes 12 feet in diameter to two treatment plants that serve the Las Vegas valley.

“The drop of lake Mead made it necessary to install pumps in such depth,’’ says Maria Elena Rodriguez, Indar’s water engineering director. “A traditional vertical turbine solution was not feasible to operate reliably in those depths.”

The sophisticated pumping station includes a 525-foot deep access shaft with a 26-foot diameter. The pumps are included in deep well shafts that feed the pumping station.

Pumps draw water from a forebay, a 12,500-square-foot cavern that is 500 feet below the pumping station. The water then enters the header pipe and flows through two large-diameter aqueduct systems to deliver water to two treatment plants.

The twenty-two low-lift pumps will deliver raw water to the Alfred Merritt Smith Water and the twelve high lift pumps will deliver raw water to the River Mountains Water Treatment facility. The water is treated with ozone and then goes through a filtration system before entering the transmission system and eventually, the homes in the Las Vegas valley. There are more than 2.25 million residents in the region, the most densely populated area in Nevada.

“A scale model was developed at Utah State and tests were performed to assess the many factors of how water entered the forebay from the intake tunnel, how it traveled to each of the thirty-four well shafts, its velocity, and more,’’ SNWA project manager Erika Moonin says. “Engineers used the data from this model testing, among many other things, to determine the appropriate size of the forebay.”

Moonin says the pumps manufactured by Indar are the deepest submersible pumps in the world. “They go all the way down each 500-foot well shaft to below the waterline, rather than sit on the waterline. They push the water up the column pipe and into the header pipe, which leads to the dual aqueduct system.”

Installing the pumps required vision and extreme coordination between the SNWA, the construction manager, Parsons, and Barnard of Nevada, the general contractor for the project. The pumps were lowered into place with a 220-ton gantry crane. Each low-lift pump weights about 68 tons, and each high-lift pump weights about 79 tons.

The Indar pumps consist of multi-stage centrifugal pumps directly coupled to a submersible electric motor in an inverted configuration, and is designed for permanent submersible operation of clean water. The motor includes a cooling shroud that ensures the cooling flow with the discharged water. The pumps are set with 13,800-volt motors that range from 3,150 to 5,200 horsepower.

“We have considered every single detail in order to make this pumping station be one of the most advanced and efficient pumping stations in the world,’’ Wulf says.

Valves at the pumping station are protected by a dozen floor doors manufactured by The BILCO Company of Connecticut. The doors are strategically placed on the project’s vaults, which house and provide access to large diameter valves. The doors are reinforced for AASHTO H-20 wheel loading. The doors are frequently used in exterior applications or in applications where there is a concern of water or other liquids entering the access opening.

Single- and double-leaf doors were used in the project, and will allow workers to access valves that require adjustment and perform maintenance on the pumps. Although the doors are quite large and heavy, they are supplied with BILCO’s engineered lift assistance to ensure safe and easy one-hand operation. Foster Engineered Products of Phoenix, Arizona, and Vice President Jen Foster procured the doors for Barnard.

“There are conduits and drain lines that required access,’’ says Tyler Askin, Barnard’s project engineer at Lake Mead. “The doors were a product that one of our suppliers had used in the past and had the most experience with, and the specifier thought they would be a good choice, especially for this application.”

The pumping station will not draw water out of Lake Mead. Rather, it’s a sophisticated safety net that will ensure that water keeps flowing to the Las Vegas valley. “It is a backup, redundant pumping station to use in the event our other two pumping stations are unable to pump due to lowering lake levels,’’ Moonin says.

The Colorado River is the lifeblood of the Southwest, responsible for an economic output of $1 trillion and 16 million jobs rely directly on the river. Snowpack falls into the river, and water is used by communities all along its 1,450-mile path. The Las Vegas Valley gets about 90 percent of its water from the Colorado River, which filters into Lake Mead. The lake is a source of the community’s drinking water. The Lake Mead Low-Level Pumping Station will guarantee that supply.

“It’s really an unsung project, but it’s important for the Las Vegas community to guarantee their water supply,’’ Askin says. “It’s one of those projects a lot of people are unaware of. It’s not alongside a highway where you can see progress every day. Water’s not something people think about it until they don’t have it. This will help make sure that doesn’t happen.”

The BILCO Company has served the building industry since 1926. During these years it has built a reputation among architects, engineers, specifiers, and the construction trades for dependability and for products that are unequaled in design and workmanship. For more information, visit www.bilco.com. 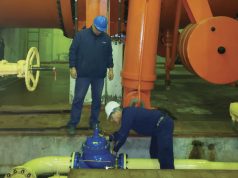 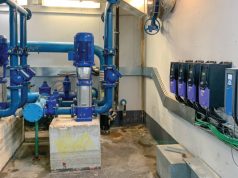 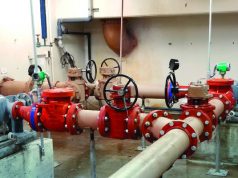 Opting for a Smarter Pumping Solution