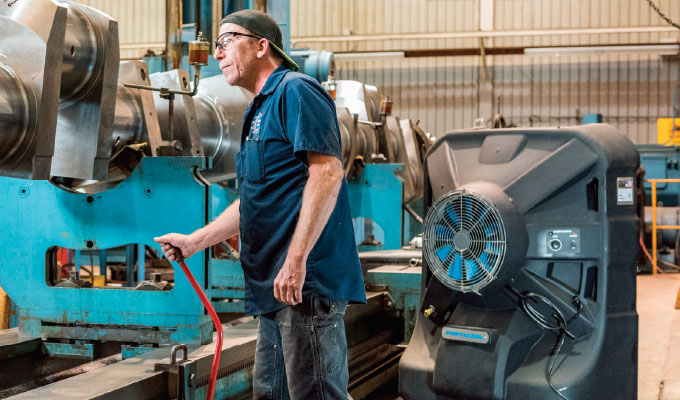 Greg Olson is the heavy machine shop supervisor at Washington Iron Works located in Sherman, Texas. As a supervisor of a twelve-man crew working on everything from crankshaft services to engine overhauls for oil and gas customers, he knows attention to detail is important. However, when Texas temperatures are pushing 90 degrees in the shade and the sun is beating down on the metal shop, concentrating on details can be tough.

“Our heavy machine shop is one of Sherman, Texas’s oldest buildings, which was built in the late 1800s. It is a massive metal building without much insulation and in the summer, it cooks,” Olson says. Getting air conditioning installed wouldn’t be too practical given how open it is, the height of the ceiling and how often the outside doors to the shop must be opened. Knowing A/C wasn’t an option, Washington Iron Works tried shop fans. They blew a decent amount of air, but didn’t really cut it because they just blew hot air around.

“I had seen evaporative coolers but I wasn’t sure my bosses would go for it because they use water and any humidity could rust our key components,” Olson adds. “Corrosion in the shop can’t be tolerated.”

Since you can use evaporative coolers with the shop doors open, Olson started telling management they should give it a try. To say they were hesitant is an understatement. Water equaled rust to them—period. 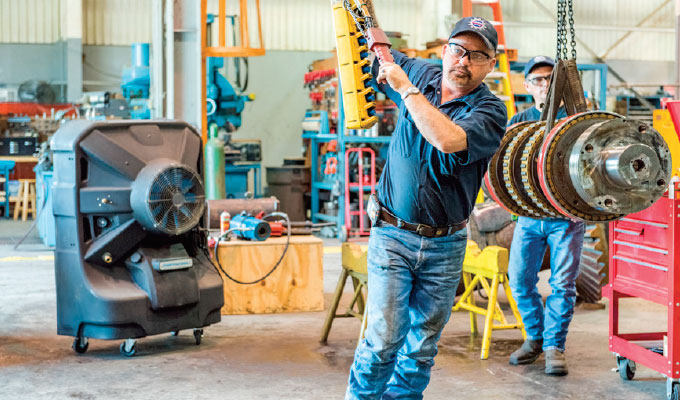 DIPPING A TOE IN THE WATER

At the time though, the heat was unbearable and made it harder for operators and technicians to stay focused and productive—not to mention safe—with sweat and exhaustion from the hot conditions.

“I finally suggested that we ask a local distributor to bring one of the new Portacool Jetstreams™ up to the shop, show us how to work it, and let us test it out,” Olson says. “To our amazement, we found we absolutely could get cold air in the shop from the Portacool evaporative cooler without putting rust-building humidity out.”

A few demonstrations of the product helped Washington Iron Works understand that Portacool evaporative coolers come with a water control valve that can be used to turn-down the amount of water running over the evaporative media in the back of the cooler.

“Bingo!” says Olson. “That was the trick to making sure we didn’t have any rust issues.”

It took some trial and error with the evaporative cooler. The shop works used it the first couple of days and realized they had too much water running, so they kept adjusting the water flow until they found the exact setting that worked for their shop. It kept them cool and they were not seeing any rust on their equipment.

Now, Washington Iron Works runs the coolers about ten to twelve hours a day. They have placed them in two corners of the shop to help create a directional airflow and the third by the main outside shop doors. By doing this, they created great circulation across the building. In fact, workers have stated that has worked better than placing the cooler where it shoots cool air directly on one person or area.

“And, again we’ve had no issues with rust or corrosion of any kind. In fact, one of the Jetstream evaporative coolers points directly at our metal assembly table and has caused no rust and another one runs right next to the ways for one of our lathes and has caused no rust there as well,” adds Olson. “So, we’re happy and our machinery is intact and rust free. We’re sold on the cooling power. It’s made a huge difference in keeping a comfortable work environment.”