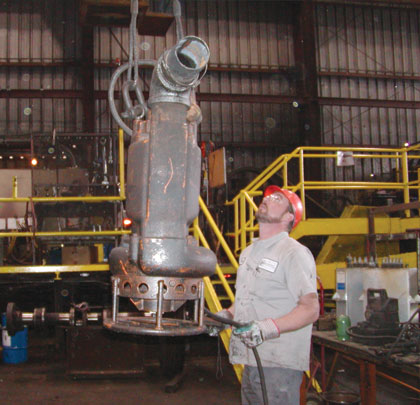 BJM Pumps prides itself on supplying the right pump for tough jobs. In the following case study, a KZN submersible pump was the choice for a very difficult pumping job.

The customer is the railroad spike division of a 100-year-old, fourth-generation, family-owned company that employs about 100 people. Based in Alabama, the parent firm manufactures and sells overhead crane rail systems and railroad products; sells new and used locomotive parts; and rebuilds used locomotives for sale to U.S. and international markets. The spike division is one of only two U.S. companies that manufacture railroad track spikes; it produces an estimated 36,000 spikes per day during busy periods.

Through three shifts per day, seven days a week, the company’s foundry turns carbon-steel bars into 5/8 inch by 6 inch (15.9 millimeters by 152.4 millimeters) rail spikes, which it sells to Class I, regional and short-line railroads as well as to contractors and industrial customers throughout North America. The spikes are precision forged to meet rigorous standards in specifications and quality. The company’s two manufacturing lines must run reliably at optimum speed and efficiency to dependably meet customers’ demands for large orders, high inventories, and quick turnaround.

During production, as hot, forged spikes come out of a furnace, they are flash cooled by a blast of water; iron scale falls off the spikes and collects, along with the water, in a sump below each production line. Once a week, a plant worker formerly climbed down into the sumps—each about the size of a desk and seven to eight feet deep—and shoveled the iron scale out by hand. Depending on production volumes, this job took between a half-day and a full day of tough, dangerous labor. The cost of this labor and the risk to employees’ safety were unacceptable to the customer, which sought a better solution.

BJM’s industrial distributor in Alabama believed that the best solution would be for the facility to pump rather than shovel out the sumps. The salesman saw a potential application for BJM’s KZN Series heavy-duty submersible slurry pump. Manufactured of abrasion-resistant, high-chrome iron and featuring a hardened wear plate, impeller and agitator, the KZN is ideal for handling slurries that contain especially heavy solids such as mill scale, sand, gravel, and coal. The customer agreed to try a 7 ½-horsepower KZN55 for thirty days.

Because the scale was so heavy, a foundry worker used a 4-inch (101.6 millimeter) diameter hose to blast water into the sump; the water jet and the KZN pump’s agitator worked together to fluidize the scale, creating a slurry that could be pumped out of the sump as the pump was steadily lowered to the bottom. The entire process took about ten minutes instead of a half-day or more; the KZN was moved as needed from one sump to the other to handle both production lines.

Following the trial, the customer purchased the KZN, it has been running without problem for more than three years—having eliminated a dangerous manual process and generated benefits for the customer in labor and insurance cost savings, safety, and production uptime.

Suzette Gibson is the marketing coordinator for BJM Pumps, LLC. Headquartered in Old Saybrook, Connecticut, BJM Pumps has been serving the industry since 1983 by supplying quality pumps at a modest price. For more information, call 877.BJM.PUMP (877.256.7867) or visit www.bjmpumps.com.

MODERN PUMPING TODAY,  January 2014
Did you enjoy this article?
Subscribe to the FREE Digital Edition of Modern Pumping Today Magazine!