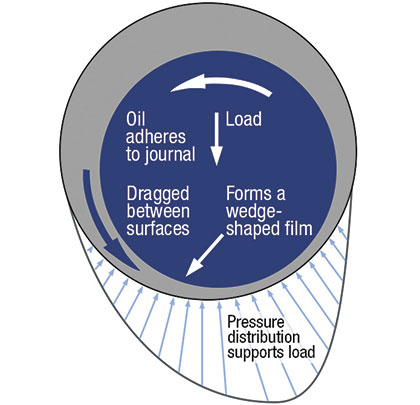 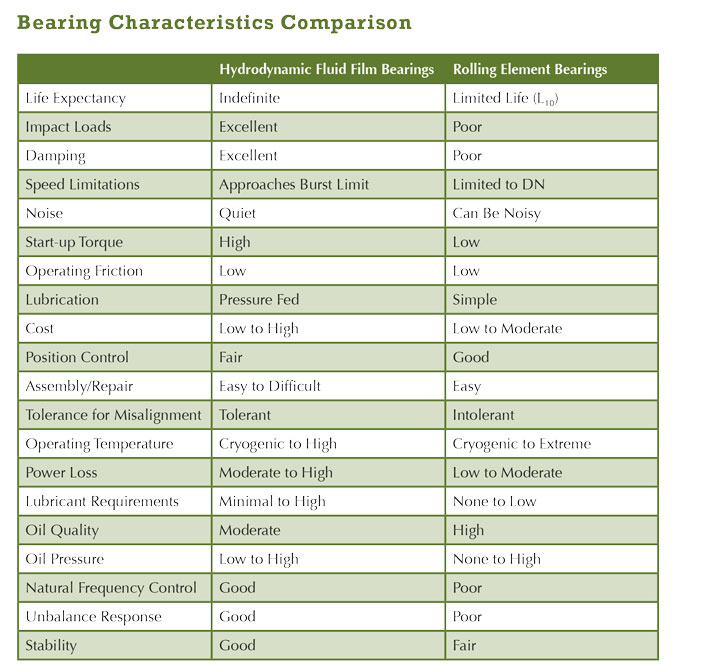 Long life and the desired performance of a fluid film bearing is achieved through the proper selection of the bearing’s materials and mechanical design. Typical factors that affect material selection include load, speed, operating temperature, insulation requirements, and lubricant type and cleanliness. Depending on the requirements, material options include babbitt (a.k.a. whitemetal), bronze, aluminum tin, polymer, ceramic, cermet, and diamond.
For mechanical design, the fluid film bearing designer must not only consider the proper sizing of the bearing to handle the loads and minimize the power loss but also incorporate features such as preload and offset that optimize the formation of film and tune the dynamic characteristics of the bearing. Tuning the bearing’s dynamic characteristics controls the dynamic performance of the process equipment – to the point where the bearings can limit vibrations. 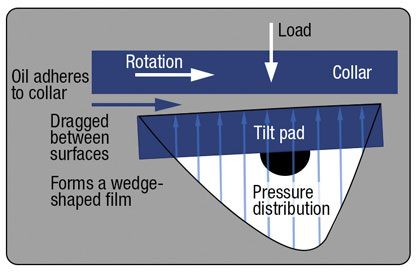 Lubricant entering the converging geometry of a journal (featured image) or thrust (above) bearing forms a wedge-shaped film; loads are then supported through pressure in the film.
BASIC OPERATING PRINCIPLE OF HYDRODYNAMIC FLUID FILM BEARINGS
The stationary surface of a fluid film bearing is separated from the rotating surface by a thin film of lubricant, be it oil, air, water or process fluid. In hydrodynamic fluid film bearings, the film pressure that separates the surfaces and counters loads (including gravity) is created by the relative motion (rotation) of the surfaces as the lubricant is pulled into a converging geometry between the surfaces. Because of this separating force, no contact of the surfaces occurs during normal operation, reducing wear and power loss compared to surface-to-surface contact.
Thrust bearings counteract axial loads (along the axis of rotation), while journal bearings support radial loads (perpendicular to the axis of rotation). The materials and design of both thrust and journal fluid film bearings are selected to optimize the converging geometries and pressure for increased efficiency of the process equipment and fewer demands on the ancillary equipment.

A combination tilt pad bearing with copper-backed babbitt thrust pads and steel-backed babbitt journal pads (left) and a combination tilt pad bearing with solid polymer thrust pads and polymer-lined journal pads (right).
MATERIALS OF CONSTRUCTION
Selecting a fluid film bearing’s materials of construction relies on two primary factors: application requirements and operating environment.
Babbitt (in particular tin-based alloys) is often the material of choice for fluid film bearings in process equipment when oil is the lubricant. Babbitt exhibits exceptional conformability, compatibility, and embedability. These qualities reduce the likelihood of damage to the shaft during start-up and shutdown, or from upset conditions, misalignment or the occasional ingestion of contaminants. Because babbitt loses strength as temperature increases, the surface temperatures of babbitt bearings are often limited to 266 degrees Fahrenheit (130 degrees Celsius). Furthermore, the use of babbitt in applications with high dynamic loads can be limited due to babbitt’s relatively low fatigue strength. For the most part, however, babbitt has gained wide acceptance in the process equipment industry because of its many benefits and relatively low cost.
Bronze may be used when operating temperatures are higher than babbitt’s limits. Oil-lubricated bronze bearings are common in process equipment applications where the bearing surface can reach 302 degrees Fahrenheit (150 degrees Celsius), and in some cases even higher. Bronze doesn’t have the conformability and embedability of babbitt, however. This can lead to shaft or bearing damage when contaminants or misalignment are present. In addition, care must be taken when selecting the material of the rotating surface when using bronze bearings to limit the potential of damage to the rotating components. 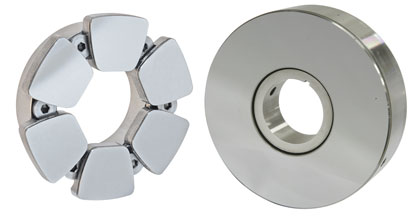 A cermet thrust bearing (left) and collar (right).
For rotating as well as reciprocating process equipment that requires higher temperature or better conformability and embedability capabilities than bronze, aluminum alloyed with tin can be used as the bearing material. Aluminum tin can operate at higher temperatures than babbitt, up to 320 degrees Fahrenheit (160 degrees Celsius), and doesn’t fatigue as readily. Babbitt and aluminum tin are applied to steel for added strength or to chromium copper to enhance heat transfer. Both can be used against a variety of rotating components, including mild steels.
Engineered polymers, as solid components or as a lining on steel backing, are also widely accepted in process equipment. Polymer bearings exhibit embedability and conformability similar to babbitt bearings while having the ability to operate at higher temperatures and loads. Because they have been proven with relatively thin films, polymer thrust bearings are often used in oil-lubricated applications with unit loads up to 8 MPa (1160 psi)–approximately twice the load typically accepted by babbitt bearings–and temperatures up to 392 degrees Fahrenheit (200 degrees Celsius).
Polymer bearings have the additional benefits of being less susceptible to chemical attack than babbitt, insulating against electrical currents and successfully operating in a variety of lubricants, including water and process fluids. With the right material composition, polymer bearings can also withstand film disruptions due to overload or temporary loss of lubrication. 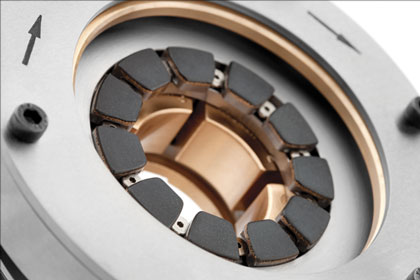 Combination tilt pad bearing with polymer-lined thrust pads and bronze journal pads.
When high temperatures, corrosive materials or contaminated lubricant rule out the use of babbitt, aluminum tin, bronze, and polymer, fluid film bearings can be manufactured with extremely hard surfaces. Ceramics, cermets, and diamond have been successfully deployed when operating temperatures exceed 392 degrees Fahrenheit (200 degrees Celsius), when films are very thin and/or when abrasives are present. Unlike babbitt, aluminum tin and polymer, which can operate against mild steels and other traditional shaft materials, ceramic and cermet require deliberate material selection for both the rotating and stationary surfaces to obtain the desired life and performance of the bearings, especially when abrasives are present or films are extremely thin.
The “best” material for bearings may vary even in the same assembly, and material alone will not guarantee performance. The carefully selected material(s) must be paired with the optimum mechanical design.
A LOOK AHEAD
In next month’s conclusion, we’ll take a closer look at the options available inside the bearing design toolbox, as well the method by which lubricant is introduced and removed from the bearing, an option that significantly affects bearing performance. ◆
For More Information:
Barry J. Blair is chief engineer at Waukesha Bearings, headquartered in Pewaukee, Wisconsin. He has responsibilities for fluid film bearing research and development, including new products and the refinement of bearing design tools and methods. For more information, visit www.waukeshabearings.com.
____________________________________________
MODERN PUMPING TODAY, July 2016
Did you enjoy this article?
Subscribe to the FREE Digital Edition of Modern Pumping Today Magazine!